In one of the lectures, the featured speaker said that the national anthem should be written by a "true small d democrat."

A popular elective course called “Performance in World Cultures” at Texas A&M University is requiring students to read articles and attend a lecture series about racism and intersectionality. Students say the course description is “very misleading.”

The “Performance in World Cultures” (PERF 301) course is often taken by students to fulfill the “Cultural Discourse” graduation requirement.

One section of the course is requiring students to attend sessions of the Liberal Arts College new lecture series “Race Talks.”

The “Race Talks” website states that its purpose is to “invigorate campus-wide conversation about anti-racist advocacy through pedagogy, performance, and research.” The Liberal Arts College series is funded by a grant from Advance Climate Together.

Sessions are held over Zoom hosted by the series’ coordinator Mariana Gariazzo. Speakers include professors, musicians, visual artists and producers. Sessions include “The White Racial Frame,” “Protest and Activism in Latin America,” and “For Colored Boys Who Speak Softly.”

Gariazzo also teaches a section of the course “Performance in World Cultures” which is stated to be about the “examination of different genres of performance through music, theatre, verbal art and dress.” She is requiring students to attend sessions of her new project “Race Talks” for a course project.

In “The White Racial Frame” lecture of the series, Dr. Joe Feagin discussed the “massive cover-up of our racist history in this country.”

Students were given a handout featuring the “long timeline of U.S. racial oppression.”

“If you want to understand US society and US racism, it is essential to memorize this timeline and embed it into most discussions you get into on racism issues,” Feagin said.

“We still live under a highly undemocratic 1787 U.S. Constitution substantially made, undemocratically, by elite white slaveholders and their white business allies,” Feagin said.

Feagin also went after Francis Scott Key describing him as a “bloody major wealthy slaveholder and back to Africa colonizationalist.” He went on to say that Kaepernick “maybe” should have been protesting the national anthem.

“Surely we can come up with a national anthem that’s written by a true small d democrat,” Feagin said.

Throughout the talk, Feagin advocated for reparations, “anti-racist training” for students and “racism countering strategies.”

While discussing the “white racial frame,” Feagin said that “racist narratives and myths and interpretations” such as ”reverse racism against whites,” “we are making great racial progress and we don’t need aggressive affirmative action or reparations programs,” and “whites are the superior and black folks should be glad they were brought here as enslaved people” are what perpetuate the ideal.

Towards the end, Feagin claimed that there is a “strong underbelly” of people “trying to preserve this racial totalitarian system” in America.

“History will radicalize you if you really look at the honest history,” Feagin said.

When asked how his discussion relates to “Performance in World Cultures,” Feagin told Campus Reform that “it is obvious if you become educated about our history.”

“Students have a choice to basically give up an A in this class or to suck it up and talk about how they are racists simply because they are white,” one student enrolled in the class told Campus Reform.

Originally, students were required to attend and write a summary about three “Race Talks” and then fill out a questionnaire. However, a student currently in the class told Campus Reform that this changed after students did not attend the live sessions and instead watched the recordings.

In an email obtained by Campus Reform, Gariazzo told a student that since “many students were opting for not attending the talks, and I need attendance to measure impact for this project, I decided to add an extra talk for those watching the videos.”

“Your attendance to these Zoom sessions help me justify the funding and impact criteria for the grant that funded the Race Talks series. As the Principal Investigator and Director of the series, I ask for your support attending the Zoom events and completing the surveys that are offered during the event,” Gariazzo said in an email to students obtained by Campus Reform.

“That is how I create data to measure the pedagogical effectiveness of the series. My efforts in putting this project together are huge, and so I hope you can join me,“ she continued.

“I am spending countless hours organizing this university-wide series. I need students to attend,” Gariazzo said in another email to a student.

However, after students lodged complaints about the change, Gariazzo announced in an email obtained by Campus Reform that she decided to reverse course and return to the original assignment load.

[RELATED: College hosts ‘community radical’ who claims White people must be willing to say ‘I am a racist’]

Gariazzo is not the only world performance professor subjecting students to racially charged course material. Campus Reform spoke to a student who took the “Performance in World Cultures” course in Fall 2020 with professor Cory LaFevers. 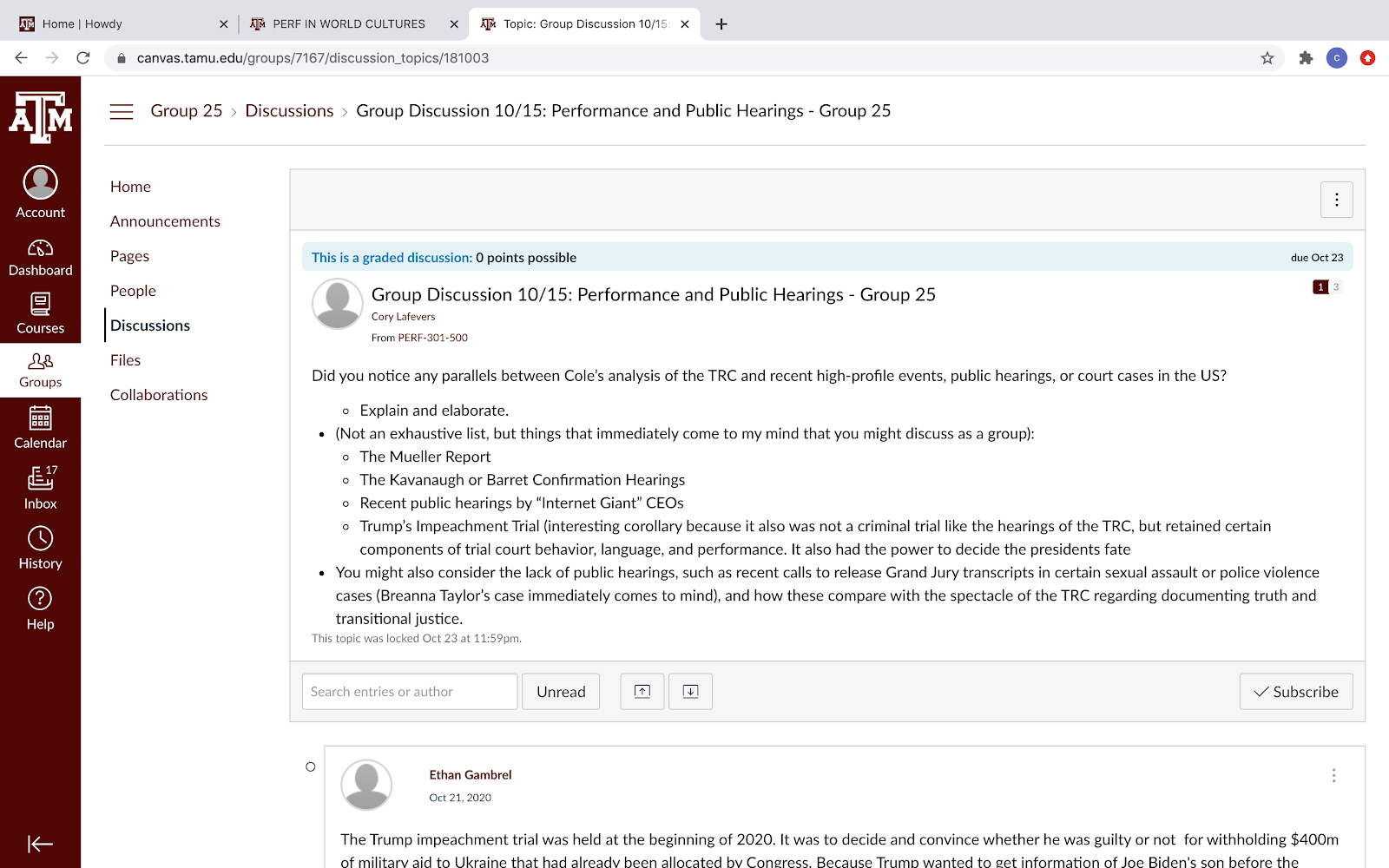 Students were also required to watch an eight-part video series called #RaceAnd which “explores the many ways race intersects with all the other important issues that impact people of color.”

The student told Campus Reform that she was misled by the course description and caught off guard by the course material focusing so heavily on race.

“From the description I thought the class would focus more on things like plays, concerts, music videos, and movies. I figured there would be other races because the fact that it’s in world cultures but I didn’t think it would be THAT big of a topic and it would be so one sided political,” she said.

A student currently in the class told Campus Reform that he was “caught off guard, but not surprised since even the classes that have nothing to do with race somehow find ways to incorporate it for at least one lesson.”

Gariazzo and LaFevers did not respond to Campus Reform’s request for comment.