Trending
1
ANALYSIS: Academia is adrift in a sea of low standards
By Jared Gould
2
Have you or a loved one been 'affected' by 'free speech?' Colorado State University has…
By Alexa Schwerha
3
Stanford band mocks Christians during halftime show
By Thomas Stevenson '23
4
PROF JENKINS: Students have no right not to be offended
By Rob Jenkins
5
'Suggestive' note ban could make for tough love on Valentine's Day
By Celine Ryan Ciccio
6
'Genderbread person' makes appearance in nursing course
By Caroline Cason  '22
Ben Zeisloft | Staff Reporter, Daily Wire
Thursday, May 6, 2021 11:00 AM

Following the death of George Floyd in the spring of 2020, Village Kids shared a resource encouraging parents to teach their children about racism from infancy. 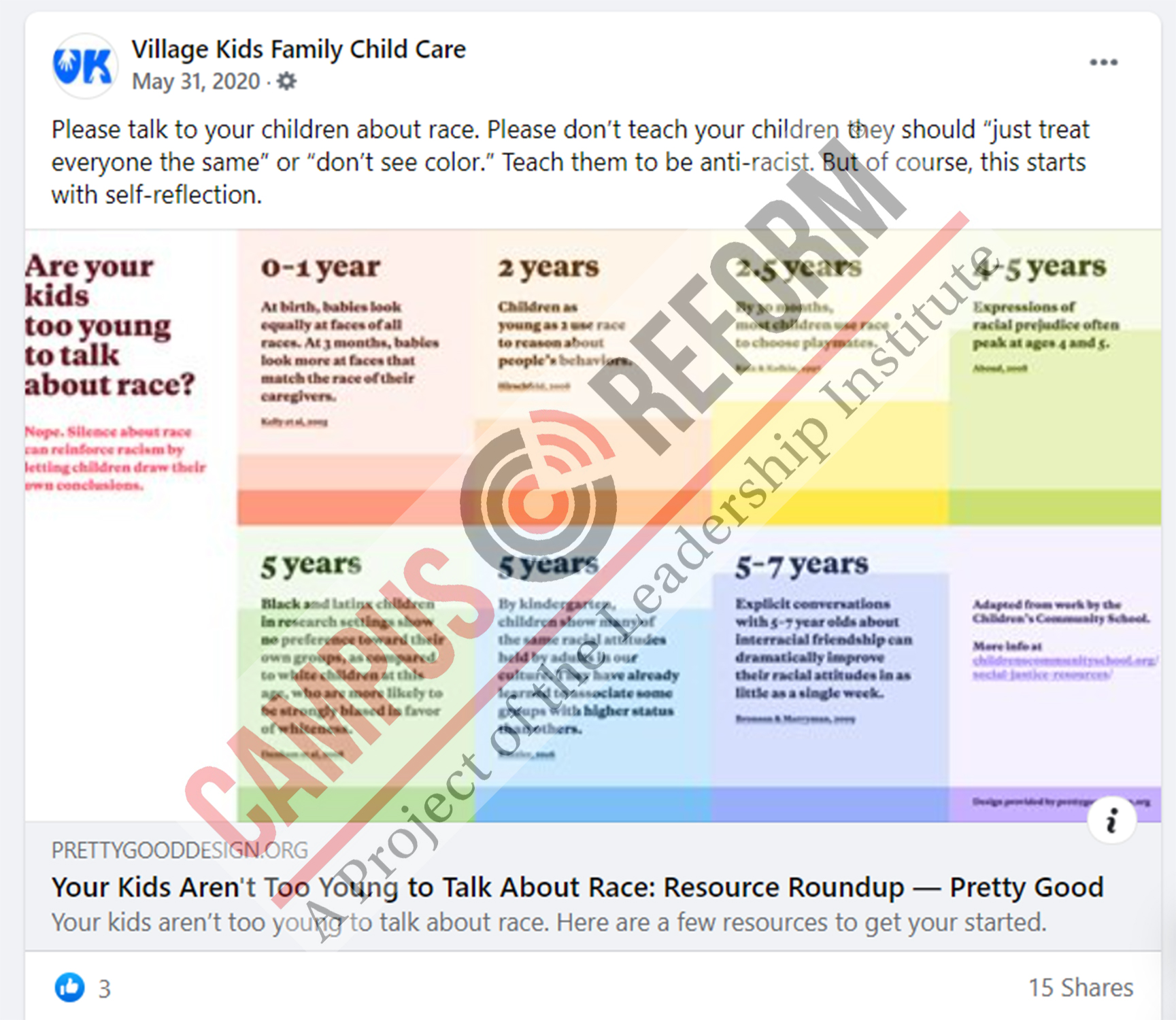 The resource states that children as young as three months old gravitate toward faces most similar to the race of their caregivers, with “expressions of racial prejudice” peaking around four or five years of age.

Days later, Village Kids shared another list of resources for parents and educators seeking to teach about racism. Among the recommended resources was Boston University Professor Ibram X. Kendi’s list of anti-racist books for kids. 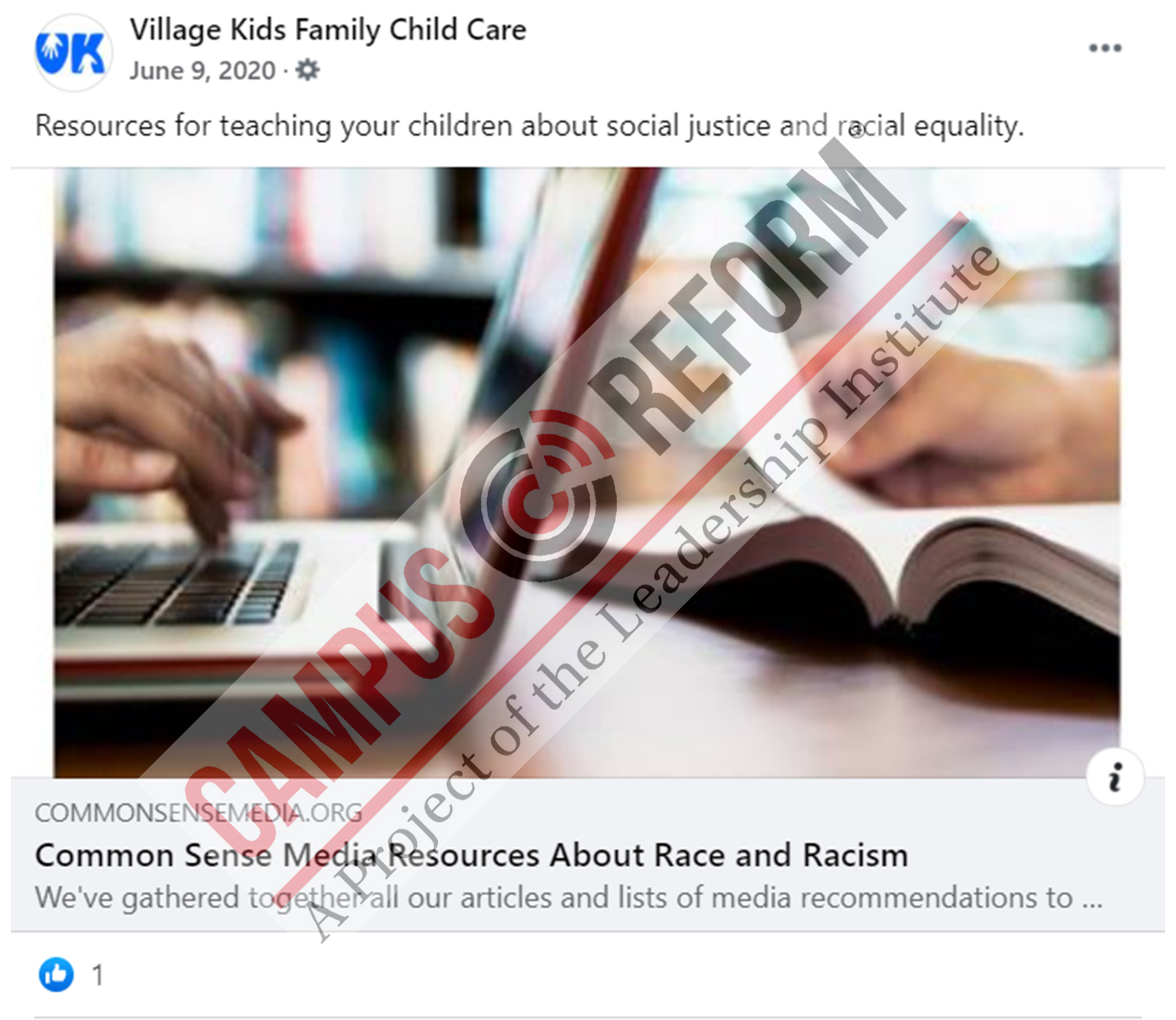 Village Kids likewise said that they were excited to watch the Netflix series “Bookmarks,” in which “celebrity readers share children's books by Black authors to spark kid-friendly conversations about empathy, equality, self-love and antiracism.” 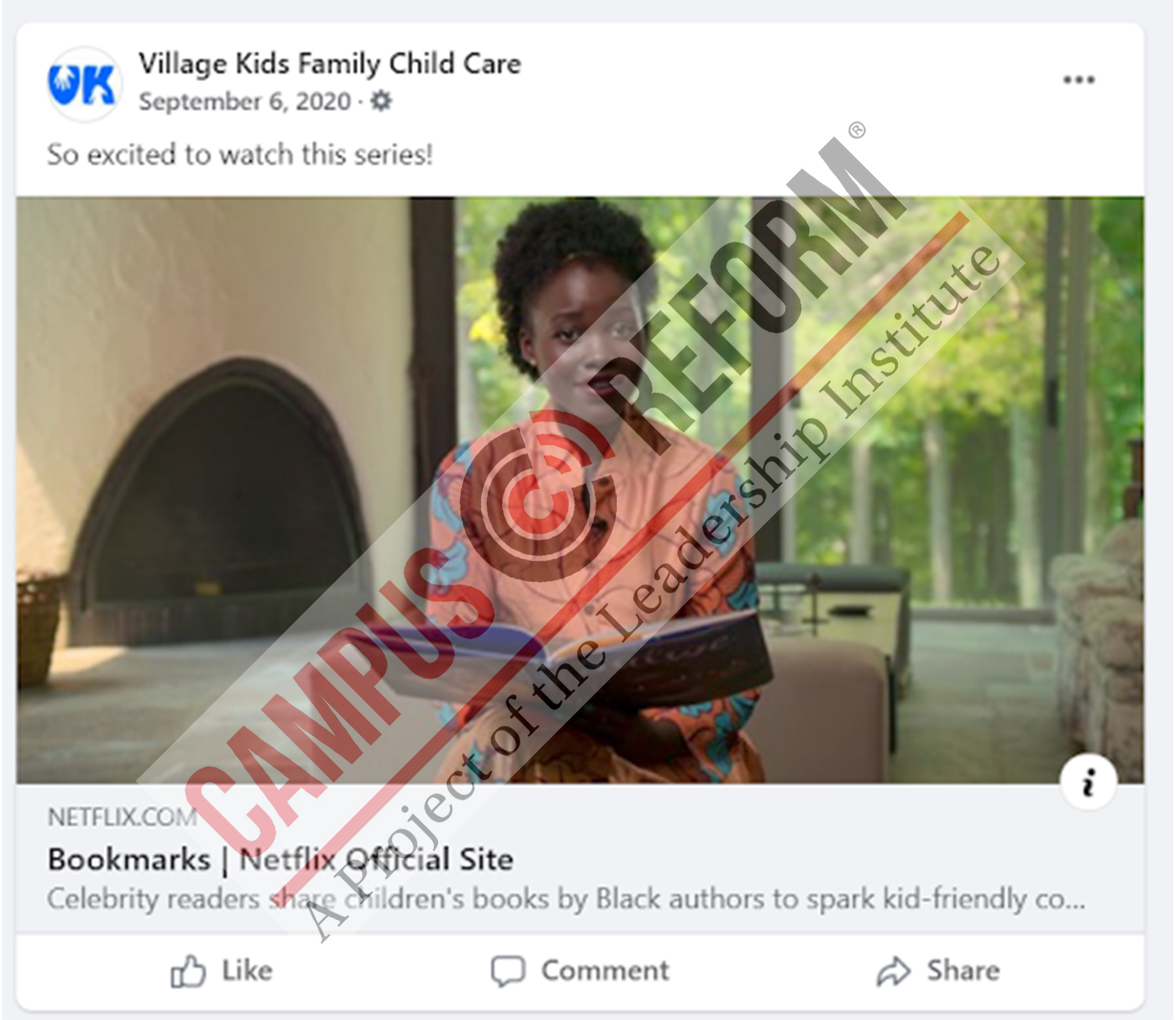 Village Kids retweeted an article titled “What Anti-racism Really Means for Educators,” which argues that “anti-racist work in all schools is essential.” 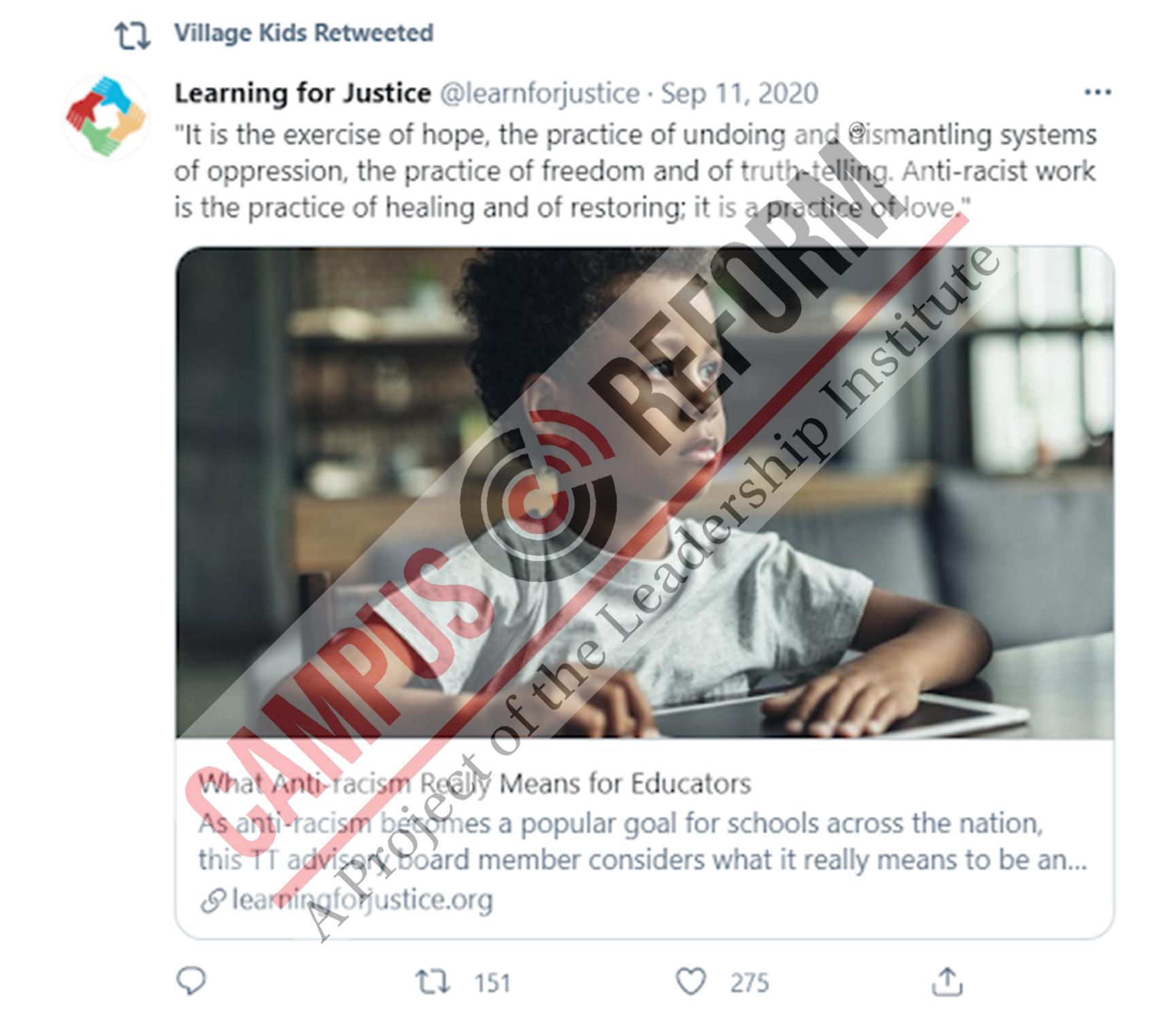 “We must create educational spaces that tend to the harm and violence that has been enacted against BIPOC bodies and minds — specifically those of our children,” reads the article. “Anti-racist educators recognize that this is the work of undoing, of dismantling, of liberating, of healing and of truth-telling. This is our collective work.”

During a phone interview with Campus Reform, DeJohnette explained the differences between “colorblind” and “anti-racist” education.

“Colorblindness is not what we want,” she said. Though she believes that proponents of colorblind education “have good intentions,” she notes that it is impossible to not see color.

“When you look at me, the first thing you see is that I’m a Black woman,” she explained. “You can’t not see that. So by being ‘colorblind’... that means you don’t see me. In essence, you’re making me and who I am — my culture, my race, my experiences, and inequities that I’ve lived through — you’re making those invisible.”

DeJohnette described how she actively seeks to craft an anti-racist and unbiased environment in every detail of the classroom.

“We talk a lot about bias and gender, and we are very intentional about our language,” she said. “For example, I would never say ‘fireman’ or ‘mailman.’ We’re intentional about using language like ‘firefighter’ and ‘mail carrier.’”

The classroom also has “images and books that are inclusive, that show nontraditional people in these roles.” For instance, DeJohnette makes sure that children see “Black female doctors” and “Mexican-American female construction workers.”