During its month of heightened activism, the group posted a meme depicting a squashed police officer alongside the caption “flatten the cops.”

Abolish Stanford — “an autonomous formation fighting for police abolition and total liberation at Stanford University” — organized a rally attended by over 100 students, according to the group's own projections.

Thank you so much to the 100+ who came to our projection event, watched the livestream, donated to our fundraiser, imagined abolitionist futures, and shared joy with us! 🌱 pic.twitter.com/7KWNa6pk6z

Throughout the event, Abolish Stanford projected slogans on a brick wall behind various speakers. Among other phrases, the group broadcasted “end police union contracts,” “no cops in mental health responses,” “cops off campus,” and “cops off earth.” 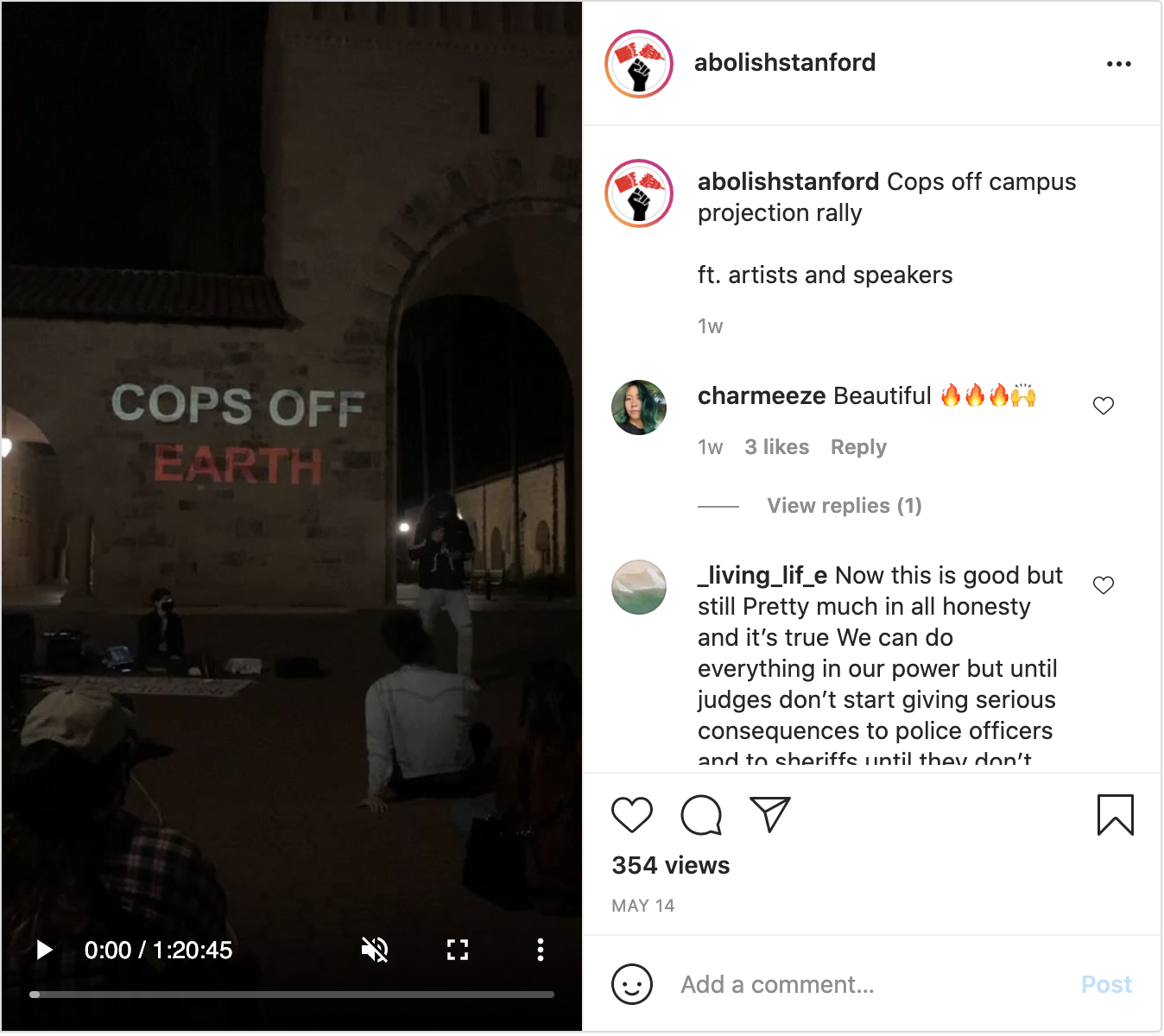 One speaker was a member of Tha Hood Squad, an art collective that distributes condoms, sanitation items, and booklists to prostitutes in urban neighborhoods. After leading the crowd in a "f--k the police" chant, the speaker stated that "when we get these b-----s on the fence ready to get knocked the f--k out, then everybody gonna do it."

During “Abolition May,” Abolish Stanford is escalating its activism through protests, events, and other initiatives.

For instance, the group encouraged students to sign a pledge declaring themselves absent “from work, class, teaching, and more” on May 3 to “get cops off campus," as Campus Reform reported.

“There are countless incidents of repression, racial profiling, brutality, and violence because these are fundamental characteristics of policing, inherent to its design,” reads the pledge. “There is no escaping this reality, whether dealing with a local or state police force or an effectively private campus law enforcement department. We cannot rely on colleges and universities to meaningfully disrupt this status quo: the various committees, campus safety task forces, and other reformist reforms they put forward are designed to re-legitimize campus police institutions, not challenge them.”

On May 14, the group posted a meme with the caption “flatten the cops,” complete with an image of a flattened police officer.

In October, Campus Reform reported that Abolish Stanford occupied the university’s police station grounds. On the same day, Stanford administrators met with members of the club for a “reverse town hall.”

Campus Reform reached out to Stanford University and Abolish Stanford for comment; this article will be updated accordingly.