Rutgers chancellor apologizes to community for daring to condemn anti-Semitism

Rutgers subsequently backtracked on its apology over Memorial Day weekend, per a statement from the university president.

The Chancellor of Rutgers University - New Brunswick has backtracked and apologized after criticism for a message in which he dared to condemn a recent “resurgence of anti-Semitism.”

On May 26, in response to global attacks on members of the Jewish community, Rutgers Chancellor Christopher J. Molloy sent out an email to the student population denouncing acts of anti-Semitism.

Molloy wrote regarding the Israel-Palestine conflict, “Although it has been nearly two decades since the U.S. Congress approved the Global Anti-Semitism Review Act, the upward trend of anti-Semitism continues.  We have also been witnesses to the increasing violence between Israeli forces and Hamas in the Middle East leading to the deaths of children and adults and mass displacement of citizens in the Gaza region and the loss of lives in Israel.” 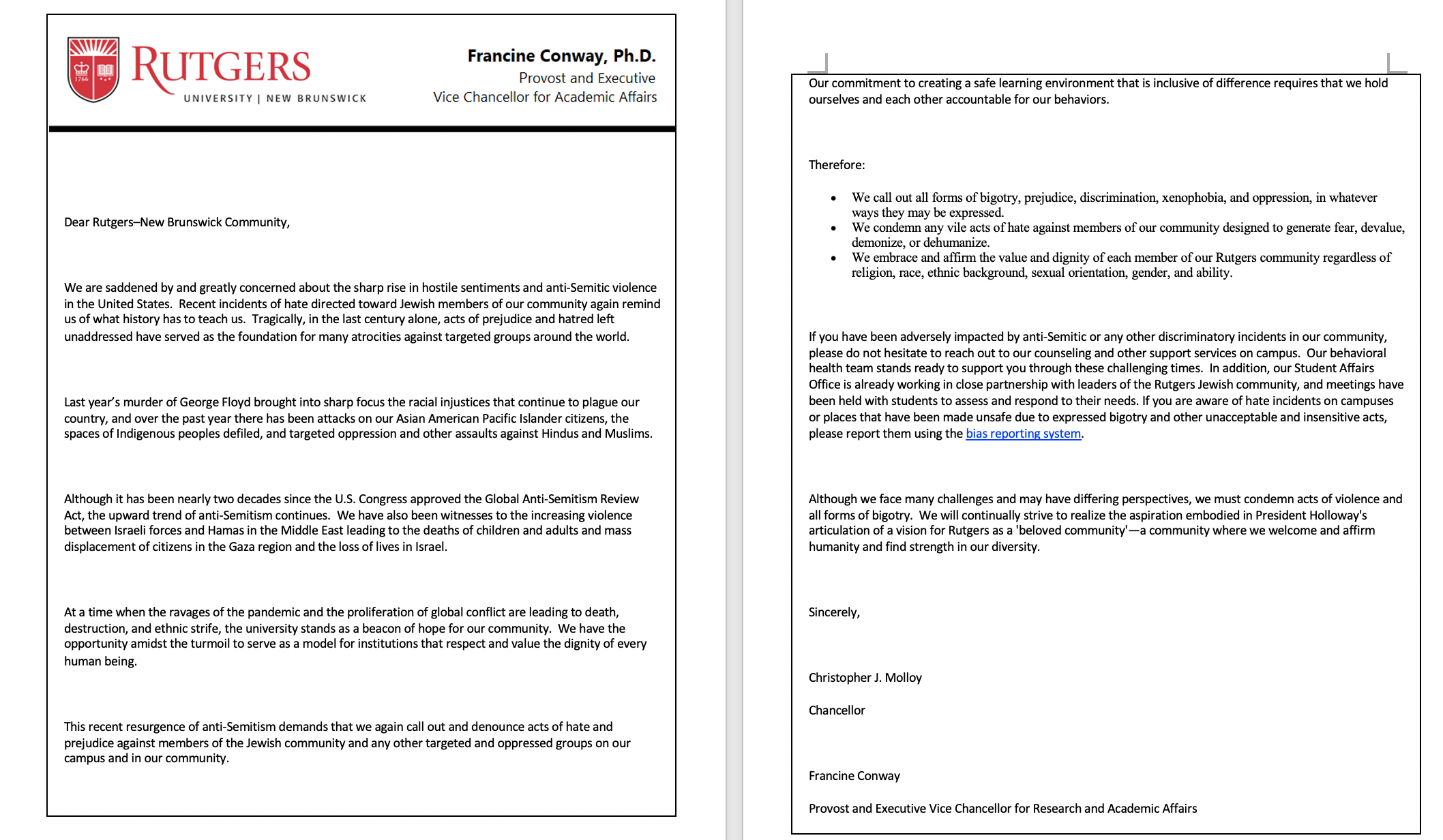 Speaking on the current state of events in our own country, Molloy wrote, “We are saddened by and greatly concerned about the sharp rise in hostile sentiments and anti-Semitic violence in the United States. Recent incidents of hate directed toward Jewish members of our community again remind us of what history has to teach us.”

“This recent resurgence of anti-Semitism demands that we again call out and denounce acts of hate and prejudice against members of the Jewish community and any other targeted and oppressed groups on our campus and in our community,” Molloy wrote.

According to the Anti-Defamation League, in just one week this May, there were over 17,000 tweets featuring the hashtag #HitlerWasRight. The organization also cites numerous other online and in-person incidents of anti-Semitism.

Soon after this email was sent out to the Rutgers student body, members of the official Rutgers subreddit began to complain about the lack of support for Palestine on a thread titled “Seriously Rutgers?”

After this thread reached 129 comments, including some placing full of blame on Israel in the Middle Eastern conflict, and many claiming the Jews are committing “genocide” against the Palestinians, the moderators disabled future comments. 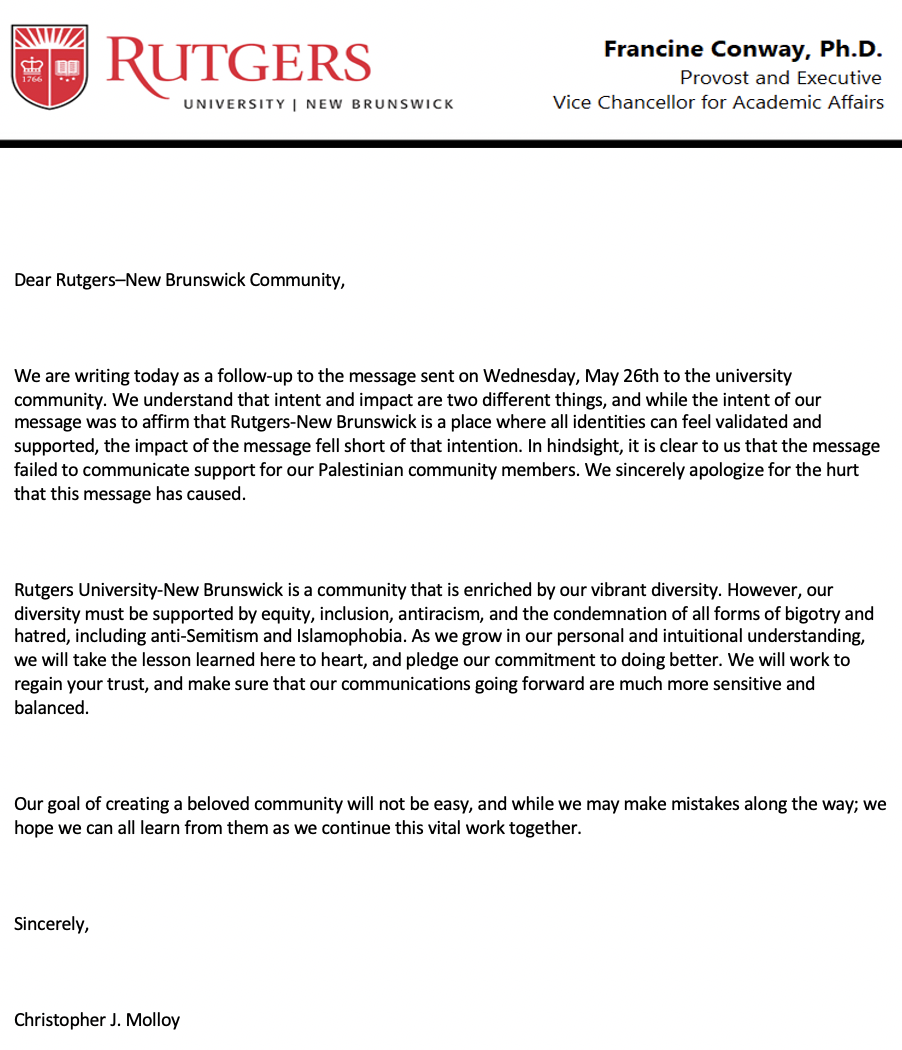 The next day, Molloy sent out a new email with the subject "An Apology," in which he sincerely apologized for his condemnation of anti-Semitism and begged to regain the trust of Rutgers’ Palestinian community.

“In hindsight, it is clear to us that the message failed to communicate support for our Palestinian community members. We sincerely apologize for the hurt that this message has caused,” he wrote.

[RELATED: Students for Justice in Palestine calls for impeachment of pro-Israel Jewish student, backs down after lawyers get involved]

“We will work to regain your trust, and make sure that our communications going forward are much more sensitive and balanced,” Molloy continued, adding “Our goal of creating a beloved community will not be easy, and while we may make mistakes along the way; we hope we can all learn from them as we continue this vital work together.”

Justine Murray, a Jewish advocate against anti-Semitism and Campus Reform correspondent, says that Jewish students face unique challenges on campus. ‘To be accepted on campus, a Jew must disavow a major part of his or her identity,” she explains.

“As Jews across the world, from Los Angeles to New York to London, are getting beaten in the streets, we’re supposed to sit back and let it happen in the name of Palestinian rights.”

“Anti-Semitism is the only form of bigotry that people are actually told to apologize for condemning,” Murray added. “Deep down, the woke mob knows their rhetoric has fanned the flames of the recent anti-Jewish attacks. Jews are hated for our nation-state, and we are labeled as right wing white supremacists unless we disavow Israel and shed our Zionism, which for most Jews is a major component of our faith.”

On May 29, Rutgers University posted a clarification on its website, stating that it did not "apologize for standing against anti-Semitism." The statement came from President Jonathan Holloway, not Chancellor Christopher J. Molloy.