Ibram X. Kendi will be visiting the college on September 20 after incoming students have read his book over the summer.

All first-year students are required to read the text and have formal discussions about the book in seminars.

According to the school’s website, “all of Albion's first-year students read a shared text that serves both to connect students to one another and to help them make the important shift from high school to college.”

In an email addressed to the Albion Community on Wednesday, June 2, 2021, the Common Reading Experience (CRE) Taskforce revealed that it had chosen the book for the first-year mandatory curriculum.

“This text speaks to the work already taking place on campus through our Blueprint for Belonging and challenges us to grow towards institutional, interpersonal, and individual antiracism,” the email said.

The email continued to say that they are continuing “to expand our reach beyond the First Year Experience to create conversations across our college and Albion community,” and that they “We will provide intentional programs, events, and opportunities for all students, faculty, staff and community members to engage with the themes of the text.”

One of those opportunities is a conversation with Ibram X. Kendi himself, the founding director for Boston University’s Center for Antiracist Research. The taskforce announced in the same email that Dr. Kendi will be visiting the Albion College campus on Monday, September 20, 2021.

“His conversation with the Albion community will wrap up Albion’s Presidential Inauguration weekend and serve as both the Richard M. Smith Common Reading Experience Lecture and the Coy James Memorial Lecture in American History,” the email said.

Albion College student and president of the Albion College Republicans Cameron Hall told Campus Reform that requiring first-year students to read this book will only create more division on campus.

“It's important to recognize and celebrate our differences, but there's so much more to a person than the color of their skin,” Hall said. “Focusing so heavily on the color of someone's skin instead of their character or their interests is harmful.”

Hall also told Campus Reform this creates a “victim mentality” for minority students on campus. Hall thinks students should be reading books that present both sides of the story instead.

The program also involves both formal discussions in First-Year Seminars and informal discussions in the residence halls and around campus.  For example, last year’s selection was "The Best We Could Do" by Thi Bui, which is a memoir and graphic novel about Bui’s life and her family’s escape from Vietnam after the Vietnam War. 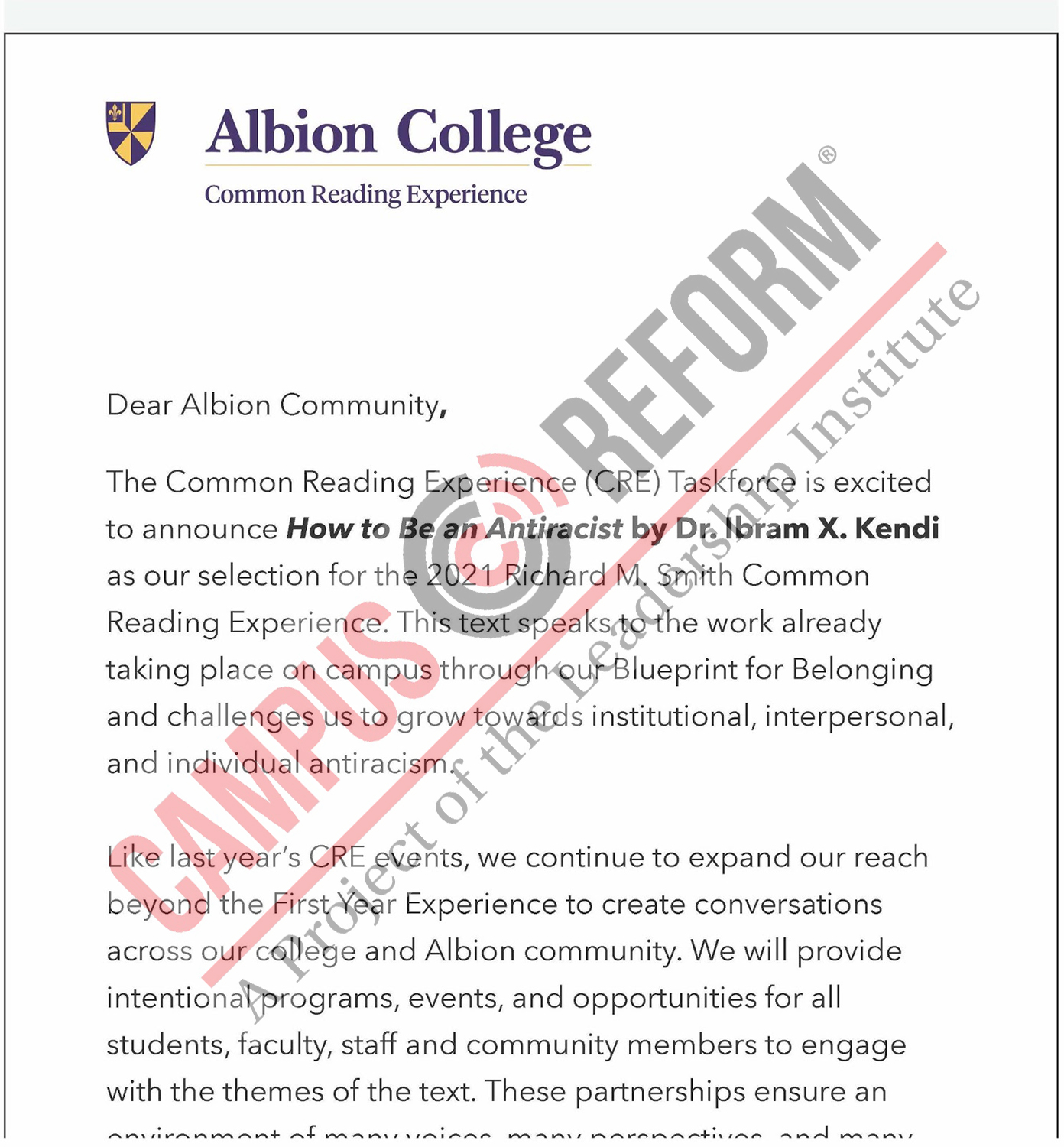 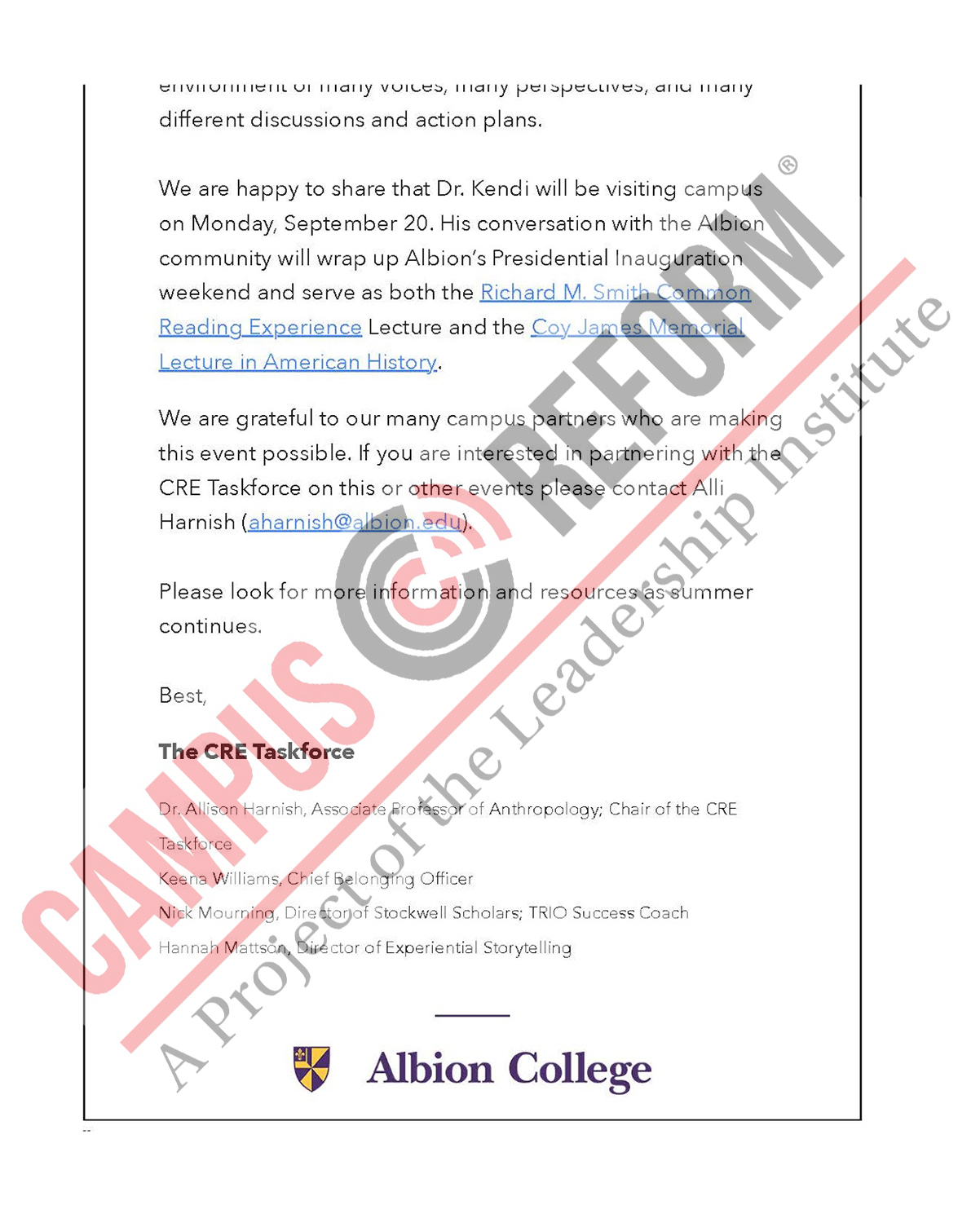 But this program is not without criticism. “[First-year students] should be reading books that present both sides of an issue so that the student can reach an opinion or a stance on their own,” Hall said. “Students should be taught how to think. But instead, they’re being taught what to think. And I think that's a serious problem in higher education all across America.”

Kendi and his work have been widely welcomed on college campuses across the country. California State University, Sacramento hosted Dr. Kendi for its antiracist convocation last year.

Campus Reform reached out to Albion College and the Common Reading Experience Taskforce but did not receive a response in time for publication.