U of Ottawa professor: ‘Sex work’ is ‘the best thing young people can do early in their careers’

One University of Ottawa professor took to Twitter recently to endorse sex work for 'young people,' calling it 'the best thing' they can do early in their careers.

One organization committed to stopping human trafficking said that the tweet is "deeply irresponsible."

University of Ottawa adjunct professor and Canadian Lawyer Naomi Sayers took to Twitter recently to endorse sex work for “young people," calling it “the best thing” they can do early in their careers.

unpopular opinion: the best thing young people can do early in their careers is do #SexWork on the side because your early career prospects will be unstable, unpredictable, low pay, likely contract work and very much exploitative. https://t.co/HRAmZFPDNX

“unpopular opinion: the best thing young people can do early in their careers is do #SexWork on the side because your early career prospects will be unstable, unpredictable, low pay, likely contract work and very much exploitative," Sayers wrote on Twitter Sunday. She then addressed the idea of sex work being exploitative by comparing it to capitalism.

Sayers then said capitalism, along with prisons, needed to be abolished, advocating for free education, and a living wage.

“Also, if you really want young people to not be exploited, provide them with livable wages, access to safe housing, clean water, free education. Literally. Abolish capitalism… Actually abolish prison but whatever.”

Alex Krause, Sayers’ publicist, responded to Campus Reform’s inquiry on Sayers’ behalf, insisting that she is “IN NO WAY” promoting sex work, but rather, was attempting to draw a correlation between it and the supposedly exploitative “capitalist society”.

“Naomi is IN NO WAY promoting or suggesting that anyone should pursue sex work, her point was to facetiously criticize capitalist society, to quote her initial tweet '...early career prospects will be unstable, unpredictable, low pay, likely contract work and very much exploitative,’” Krause told Campus Reform.

When asked what Sayers meant by her tweet, Krause told Campus Reform that her “intent” was to called out “systemic racism” and “stigmatization."

“What Naomi meant is stated plainly. Yes, it is nuanced; but NO, she is not directly advocating for sex work. Her intent remains to call out systemic racism / stigmatization wherever it exists, and it is rampant within for-profit Canadian higher education institutions AND the prison system.”

“Capitalism, for-profit education, and prison are inherently stigmatizing towards certain marginalized groups. As we noted in the previous email, Naomi’s lived experience of stigmatization in the legal realm is telling, considering the massive investment that she made personally and financially to pursue a legal education.”

Krause then told Campus Reform that the interpretation of Sayers’ tweet was “indicative” of the problem Sayers is trying to address.

“Your interpretation of her coy, and nuanced take on exploitation of capitalism vs exploitation of sex work may be indicative of the exact issue she is trying to highlight - the quickness to stigmatize and/or “slut shame” sex work.”

“Capitalism has created an economy that many people leave university indebted for decades, and in turn feel pressured to work in exploitative career paths… Sex work can be exploitative, just like any other kind of work, and in fact it predates capitalist societies. Capitalism only further incentives “have nots”/marginalized communities to pursue whatever means they must to survive.”

[EXCLUSIVE VIDEO: Students support college 'Sex Week' events...but they're not so sure about their parents]

“For Professor Sayers to flippantly encourage young vulnerable students to engage in such a harmful industry is deeply irresponsible and extremely offensive to survivors who are working hard to heal and recover from the damage prostitution inflicted on their lives," Taylor wrote.

“The sex industry is a system of violence and gender inequality. It is not a 'job like any other.' It puts girls at higher risk daily of rape, theft and murder. It causes long-term PTSD comparable to torture victims… We believe education leaders ought to be protecting young women, and empowering them to aim high, not echoing pimp’s advertisements for the sex trade.”

Sayers’ publicist contacted Campus Reform after publication and insisted Sayers has no relation with the University of Ottawa as a professor.

When Campus Reform reached out to Sayers for an interview, she replied, “my policy is not to answer questions from media in which the answer can be found on google [sic], which tweets are searchable on google now (aka do their research)”.

Research conducted by Campus Reform found that in Sayers LinkedIn profile, she currently touts herself as “adjunct professor” at the university.

“I teach the Colonialism, Territory & Treaties at UOttawa’s Institute of Indigenous Research and Studies”, states her profile.

Sayers is also designated as an adjunct professor on the Ontario Paralegal Association website and the website theorg.com, which lists its mission as "to make organizations more transparent." 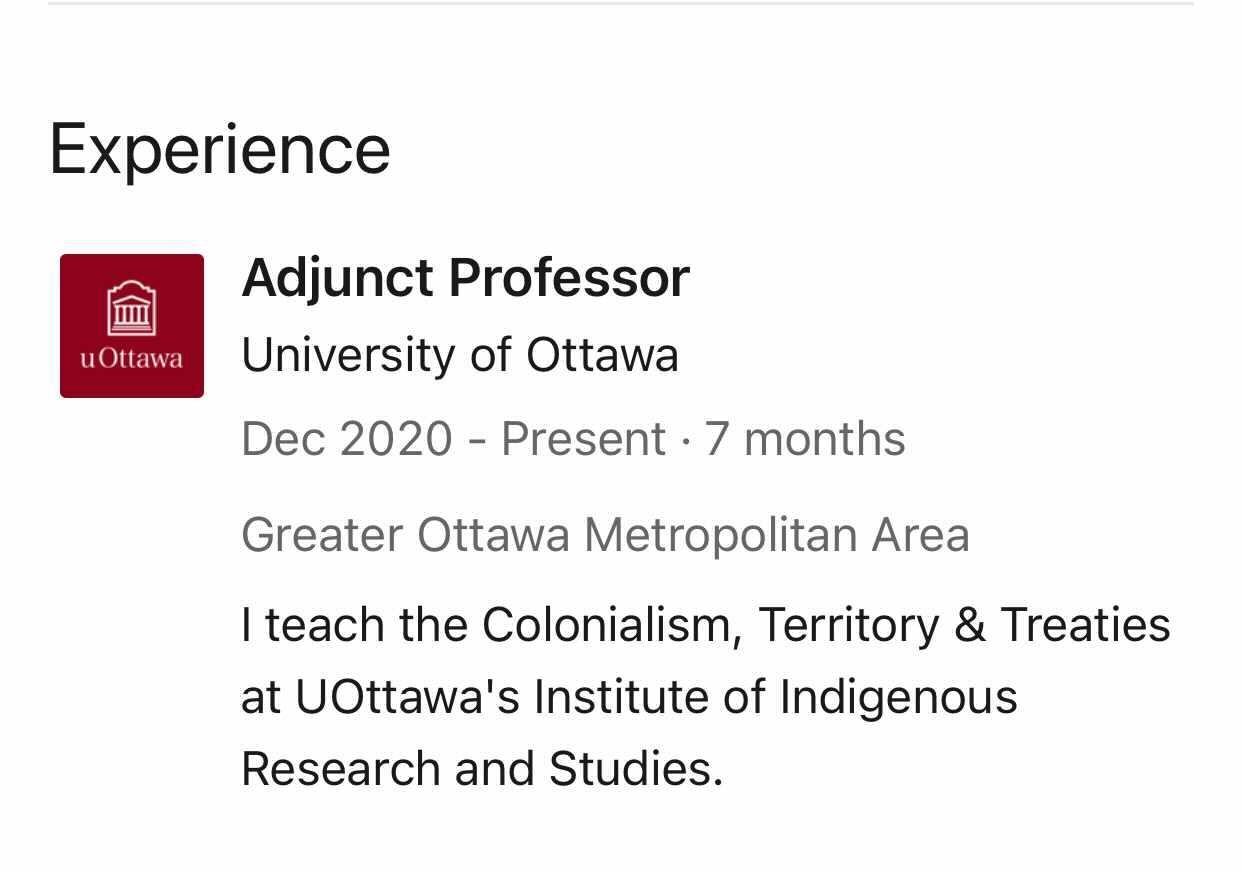 Campus Reform contacted the University of Ottawa for comment. This article will be updated accordingly.

Addison Smith the Host of “In Focus with Addison Smith” on One America News Network. He was previously a Campus Reform Reporter, covering liberal bias on college campuses. Addison previously worked with Liberty University's Standing for Freedom Center as a social media manager, the College Fix as a student reporter, and was also a Campus Reform Senior Correspondent. Both he and his work has been featured in Fox News, Daily Wire, Breitba...