Emory University, which is affiliated with the Methodist Church, is hosting a series of lectures aimed at educating people on pro-choice abortion policies.

The United Methodist Church does not support abortion as a means of birth control or preference.

Emory University’s Rollins School of Public Health is hosting a series of events that teach college students abortion advocacy "from both local and global perspectives."

The “GEMMA Community Workshop” is set to take place next week over the course of three days, and with 17 hours of total lecture time. “GEMMA” stands for “Global Elimination of Maternal Mortality from Abortion” and is fund-awarding program affiliated with Emory.

At the time of writing the event registration page has been locked, though it was initially open to the public. Before the page was password protected, one would have to answer a series of short questions and await approval by an administrator to receive a registration link.

Planned Parenthood is collaborating with Emory and other Atlanta metro area institutions, including Georgia State University, to promote "abortion-related knowledge" and "de-stigmatization."

Promotional materials for the event encourage student attendance so they “learn public health fundamentals about abortion” and “increase [their] knowledge of abortion stigma and advocacy.” 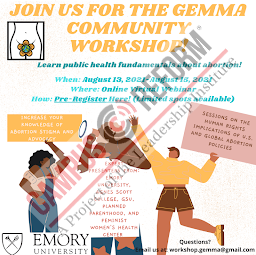 According to the event’s webpage, the three-day seminar is based on a graduate course offered by the school which they claim is “very popular.” Students and “community stakeholders” are among the groups invited to attend.

Emory is formally affiliated with the United Methodist Church and hosts one of just 13 seminaries that are recognized by the church.

The university’s decision to host this event conflicts with the stance of the United Methodist Church on abortion. Per the church's website, Methodists hold that its faith “does NOT affirm abortion as a means of birth control” and that they “unconditionally reject abortion as a means of gender selection or eugenics.” Only in instances where the mother’s life is endangered, or the fetus isn’t viable, does the United Methodist Church condone abortion.

In addition to hosting this seminar, GEMMA runs the GEMMA Fund, which provides monetary to abortion researchers.

Campus Reform reached out to the event’s organizers and Emory University for comment; this article will be updated accordingly.