ACADEMICALLY SPEAKING: Afghanistan outrage may be the wake up call needed for those hypnotized by campus Marxists

America’s disastrous end to its longest war is now exposing how that failed ideology has subjected the country to social rot.

"Academically Speaking" is a series by Campus Reform Managing Editor Zachary Marschall that, drawing on his firsthand experience working with other scholars across the globe, reveals how radical ideas originating in academia impact Americans’ daily lives. Marschall holds a PhD in Cultural Studies and is an adjunct professor at the University of Kentucky. His research investigates the intersections of democratic political systems, free market economies, and technological innovation in the production of national and cultural identities, as well as the exchange of cultural goods, services, and practices.

There’s a reason that comedian Bill Maher recently used higher education as a metaphor to lacerate the woke left’s contrived criticisms of the United States – and it has to do with power.

Maher’s monologue came in the wake of the Biden administration’s botched evacuation of Afghanistan, the failures of which have resulted in the torture of women, and Afghans’ desperate attempts to escape the Taliban by clutching onto an ascending US military airplane.

The reason is not just that America’s college campuses are now citadels for social justice warriors emboldened by devotion to their woke orthodoxy. There’s a deeper, more structural explanation for why Maher’s critique works, and why “Biden Remorse” has trended on Twitter. Both reactions express larger cultural and social doubts ruminating in the minds of the president’s supporters.

Maher’s metaphor was apt because universities incubate Marxist thought and values in a way that cloak Communism’s dangers and historical failings. The result is a veneer of respectability professors can attribute to communism, which empowers them to publicly tout murderous leftist regimes.

Ever wonder why there are so many Marxist professors but an academic making a career out of pro-fascist research would be unconscionable?

True Marxism has never been realized, many of these professors will argue. So those regimes that killed 100 million people in 100 years are not indictments of Marxism’s efficacy. Academics use this argument to blunt criticisms of leftist ideologies in their syllabi, research, and social media posts.

That entrenched stubbornness is how leftist ideas have taken ahold of higher education, never minding the fact that it has been 173 years since Karl Marx penned Communist Manifesto and his ideas have yet to realize success.

Nearly two centuries later, America’s disastrous end to its longest war is now exposing how that failed ideology has subjected the country to social rot.

“America may not be the country of your faculty lounge and Twitter dreams, but no one here tries to escape by hanging on to an airplane,” Maher quipped during the August 27 episode of his HBO show, Real Time.

“What’s the lesson of Afghanistan?” Maher then asked. “Maybe it’s that everyone from the giant dorm room b***h session that is the internet should take a good look at what real oppression looks like.”

What's the lesson of Afghanistan? Maybe it's that everyone from the giant dorm room bitch session that is the internet should take a good look at what real oppression looks like. #Wokeistan #WakeUpCall pic.twitter.com/HoNJkucheF

Alone, students reading Marx in class is not the problem; the cultivation of the mind requires individuals to attain cultural literacy and engage with ideas they find repugnant.

No. The problem is that academics, who have the capacity and authority to understand the threat that these Marxist-informed tactics pose, can intimidate others into creating a critical mass for their moral outcries. Academics can do this because they have successfully duped a well-intentioned, but ill-equipped, public that is addicted to being on the right side of history into believing that Marxism today in America is either benign or a red herring of the political right when it is in the service of progressive goals.

Take, for example, Campus Reform reporter Ophelie Jacobson’s interviews with University of Central Florida students who in real time realized the contradictions of their knee-jerk anti-American critiques when prompted to consider the plight of Afghan women living under Taliban rule.

The point is not that oppression does not exist in the United States – it does – it is that American universities produce and replicate these ideological narratives that both students and the public take for fact, without critical analysis, because higher education as an institution has shut out meaningful diversity of opinion.

Students are not being taught multiple perspectives, but they do retain the capacity to synthesize opposing viewpoints and make their own decisions.

The tactic of presenting Marx as benign was on full display last spring at Villanova University, when sociology professor Glenn Bracey used the purported “spiritual” essence of Marxism to advocate for teaching Critical Race Theory.

Several outlets such as The Post Millennial and Blaze Media reported Bracey’s comments to cover the proliferation of CRT in American schools and media, but no news organization genuinely investigated the Villanova professor’s characterization of Marxism, which he explicitly used to advance his pro-CRT agenda.

As reported by Blaze Media, after stating that Critical Race Theorists “should continue to be aggressive in promoting critical race theory,” specifically “how it relates to spirituality and religion in particular,” Bracey argued that the “core question for critical race theory is one of releasing people, especially people of color, especially black people, from the oppressive systems that deny us access to our species being, including racism. It’s Marxism."

Then came the lie.

“Marxism is fundamentally a spiritual concern, and it’s the same spiritual concern that Evangelical Christians have,” Bracey stated. “So the church and critical race theory actually have the same purpose with respect to the Marxist origins, even though Evangelicals don’t seem to recognize that.”

While there is plenty of scholarship on the relationship between Marxism and spirituality, such readings of Marx are more the acts of modern scholars grafting their secular faith on to Marx’s critical observations of social institutions such as religion. Texts such as The God That Failed and The Opium of the Intellectuals demonstrate that leftist intellectuals make ideology, and its potential for practical results, into their spirituality.

Marx, who was born Jewish, may be most appropriately described as quasi-atheistic.

His texts that engaged religion and spiritually, such as “On the Jewish Question,” critiqued the status of Jews in Christian Europe and the role of organized religion in classed societies. That distinction is important because such critique more so informed how Marx saw the power dynamic work between economic classes, not spirituality in a religious sense.

Marx witnessed what he saw as the capitalists’ domination over the proletariat, and used the totality of his observations to critique the philosopher Georg Wilhelm Friedrich Hegel, which laid the foundation for his call for revolution and class struggle.

The dialectic operates differently according to different philosophers and schools of thought, but in essence maps the nature by which human development or arguments progress forward. Dialectical thought comprises the thesis and antithesis of an idea or situation, which are then expressed singularly through the synthesis of the two.

Hegel’s dialectic asserted that the thesis and antithesis resolve into a spirituality-based synthesis. Marx opposed this idea, advocating instead for the perpetual conflict, not resolution, as the driver of history. Conflict, the need for revolution, moved history forward, according to Marx.

This core belief is why he called for solidarity before the overthrow of liberal capitalism. To say that Marxism brings humanity closer to a higher spiritual plain or Christian goodliness is deceitful.

Marx did not see an endpoint to humanity, as the term resolution implies, but rather a continuum of various groups’ domination over others. Marxism is defined by conflict. His idea of progress is only achieved by ownership of power – the modes of production.

Look to power, not spirituality, justice, or equity, as the motivating force behind leftist academics’ agendas. The manipulative revision of history imposed by Critical Race Theory, the censorship of speech deployed by transgender rights advocates, the destruction of property, and the silencing of controversial ideas are all expressions of power cloaked by nice-sounding words.

No resolution is coming. These examples render clear to everyone that it will never be enough for leftists until the woke agenda, the one nurtured with impunity on campuses, permeates all facets of life.

The state of Pennsylvania, for example, is spending $2.5 million of its COVID-19 relief funds on diversity, equity, and inclusion programs at its public universities. Is that allocation in actual aid of the pandemic’s effects on students and institutions, or an example of those with power using the totality of the pandemic to subject every facet of life to their preferred politics?

There is hope, however, that the centrists and center-left liberals who championed these causes are starting to detach themselves from the slogans and actions they previously embraced in hysteria fueled by the previous administration.

Afghanistan, with all its preventable horror and unnecessary loss of life, may be what starts the unraveling.

“We told ourselves a fable that Biden was competent because we were rightly desperate to free ourselves from Trump,” the politically moderate writer Caitlin Flanagan tweeted on August 28. 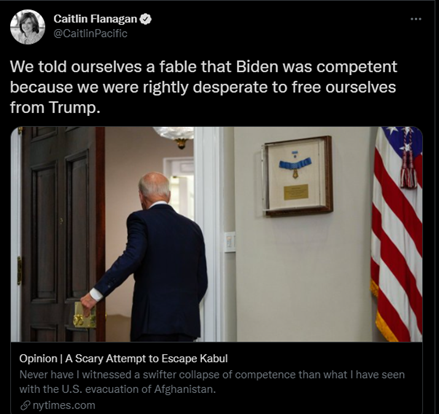 The Taliban reconquering Afghanistan is not the direct result of wokeness. But the destruction it has caused in recent weeks is waking people up to the possibility they uncritically, unthinkingly, supported these causes in a blind rage against President Trump.

At the end of August, Biden’s approval rating had declined 13% since May, to well under 50 percent. When Campus Reform video reporter Addison Smith spoke with students at George Mason University last month, not one individual in the diverse, multiracial set of interviews stated that the United States was better off under Biden than under Trump. Some visibly processed the possibility the reverse may have some truth to it.

A counter-awakening may be coming where those on the left realize that support for Marxist-based activism and opposition to the previous administration were always a false binary.

Marxism didn’t need a Communist revolution in the United States to sow division so deeply and so quickly in this country. Academics and activists’ snake oil pitch for justice did that.

Zachary Marschall received a PhD from George Mason University and is an Adjunct Assistant Professor at the University of Kentucky. "Academically Speaking," his series for Campus Reform, reveals how radical ideas originating in academia impact Americans’ daily lives. Zachary is a member of the National Association of Scholars.