Conservative leaders on campus are pushing back against the accusations and criticizing the university’s handling of the situation.

Trending
1
Stanford band mocks Christians during halftime show
By Thomas Stevenson '23
2
Harvard Law instructor: 'It is our civic duty to accost' the '6 justices who overturned…
By Blake Boudreaux  '25
3
UChicago announces 'The Problem with Whiteness' course
By Caroline Cason  '22
4
Steven Crowder delivers fake ‘Fatness as Self-Care in the Era of Trump’ paper in drag a…
By Katelynn Richardson  '22
5
Will Witt responds to students' accusations that he is a 'fascist'
By Kate Anderson
6
College drops disciplinary charges against conservative student
By Toni Airaksinen
Robert Schmad '23 | Senior Georgia Campus Correspondent
Tuesday, October 5, 2021 7:56 PM

Emerson College’s Turning Point USA chapter could be banned from campus after students reported them for handing out stickers critical of the Chinese Communist Party.

The sticker features a character from the popular video game Among Us with a hammer and sickle on its side and has a caption that reads “China kinda sus.”

“Sus” is an abbreviation for “suspicious” commonly used by gamers.

A number of students, organizations, and college officials have condemned Emerson TPUSA, claiming that the sticker promotes bigotry towards Asians.

William P. Gilligan, Emerson’s Interim President, called the stickers “disturbing” and claimed that they featured “anti-Chinese messaging inconsistent with the College’s values.” Per an email the president sent to Emerson’s student body September 30, an official investigation into the incident has been launched. 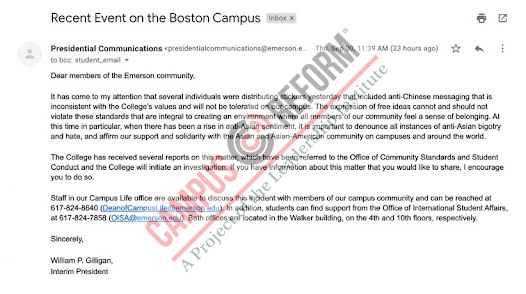 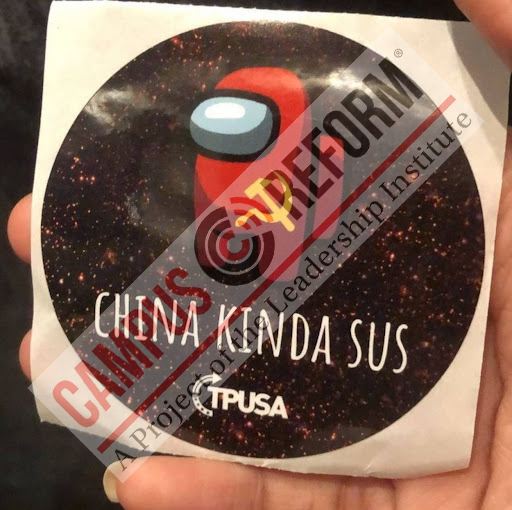 Emerson’s Instagram account also "liked" posts made by the college’s Chinese Student Association claiming that Emerson TPUSA is racist and calling for them to be punished. 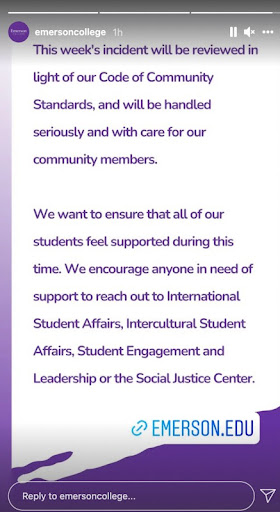 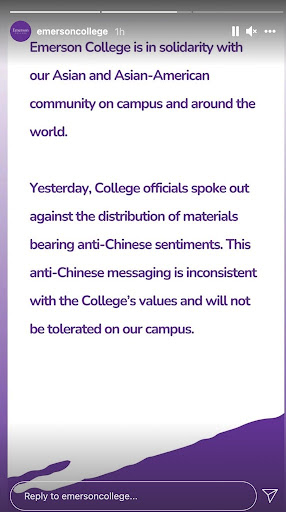 Emerson TPUSA officers told Campus Reform that they received an email from the college's Community Standards Department informing them of the investigation. Until the investigation is concluded, Emerson TPUSA is prohibited from holding meetings or engaging in any other kinds of club activities.

The group released a video four days ago on their social media platforms clarifying that the stickers were intended to criticize the Chinese government, which they point out is responsible “for the largest genocide in the world right now”, not Chinese people generally.

“We can criticize the atrocities committed by a country’s government” KJ Lynum, the club’s treasurer, said to Campus Reform, “without it reflecting our view of the people who come from that country.”

She concluded the organization’s response by demanding an apology from the individuals and groups who have accused Emerson TPUSA of racism.

Lynum, who was at the club’s table when the stickers were being distributed, told Campus Reform “the majority of the students that liked the sticker and commented on the sticker were Asian” and that they “had really good conversations about the CCP.”

She also pointed out that “nobody mentioned anything to [their] faces or expressed their uncomfortability [sic]” while the club was handing out stickers. The Among Us Stickers only started to receive backlash after one person on social media called the sticker racist, Lynum said.

Sam Neves, president of Emerson TPUSA, told Campus Reform that the club’s leadership board may face “disciplinary action” for handing out the stickers. Lynum expanded on this point by informing Campus Reform that Emerson held a meeting for Asian students to discuss the incident and how they want the school to respond.

According to Lynum, many of those at the meeting called for the removal of TPUSA from campus and the expulsion of club officers. Neves is an international student, if expelled he would lose his student visa and potentially be deported from the country.

“This could be devastating for me,” Neves stated. “My visa relies on my enrollment with Emerson. If my enrollment is terminated then I have 14 days to leave the country. The stakes for me are really high with this.”

[RELATED: China's presence at US colleges runs much deeper than Confucius Institutes]

Neves expressed his doubts to Campus Reform that Emerson will handle its investigation of the club in an unbiased manner. “The school administration already called the stickers ‘racist bigotry’ before even talking to us” he stated “How are we supposed to believe the investigation will be unbiased?”

Lynum informed Campus Reform that Emerson “never reached out to us prior to releasing the statement” and that they only found out about the backlash after the college’s president had emailed the entire student body.

On Instagram, the club’s response video has garnered hundreds of comments, some of which are from Chinese students defending the CCP and its actions.

“We’re seeing a lot of mixed reactions.” Lynum said in reference to how people are reacting to her video. “There are people hopping on the bandwagon of calling us racist… but there are also a lot of people who are defending what we’re saying.”

Neves told Campus Reform that he believes Emerson’s Chinese Student Association may have wanted their TPUSA chapter removed from campus prior to the Among Us sticker incident. As evidence of this, he points to a post made by the group claiming that Emerson TPUSA had engaged in racist activities in the past.

Both Lynum and Neves have allegedly experienced harassment on campus as a result of the controversy.

Lynum told Campus Reform that she has had a drink spilled on her, been confronted by people waiting outside of her classes and often notices people looking at her while she’s moving around campus.

Neves stated that he feels uncomfortable in his other student organizations, even the religious groups.

“We speak so much about diversity on college campuses,” Lynum said to Campus Reform in a statement. “But we often neglect the diversity of thought and the experiences of every individual.”