Students at Montana State University allege they were blocked by police officers and prevented from delivering a petition to the president.

Students at Montana State University were blocked by police officers and prevented from delivering a petition to the president on September 24.

Dean and MSU students planned to deliver the petition in person to Cruzado during a scheduled protest and found the side door of Montana Hall locked. The front door was also locked and had two campus police officers standing outside.

Dean stated in a phone interview with Campus Reform that one of the officers claimed he “smelled alcohol” and required that an appointment be made with the president.

Dean however clarified that he tried to set up an appointment with Cruzado and stated, “They’ve dodged me multiple times."

At one point, an MSU employee came outside to take their petition. 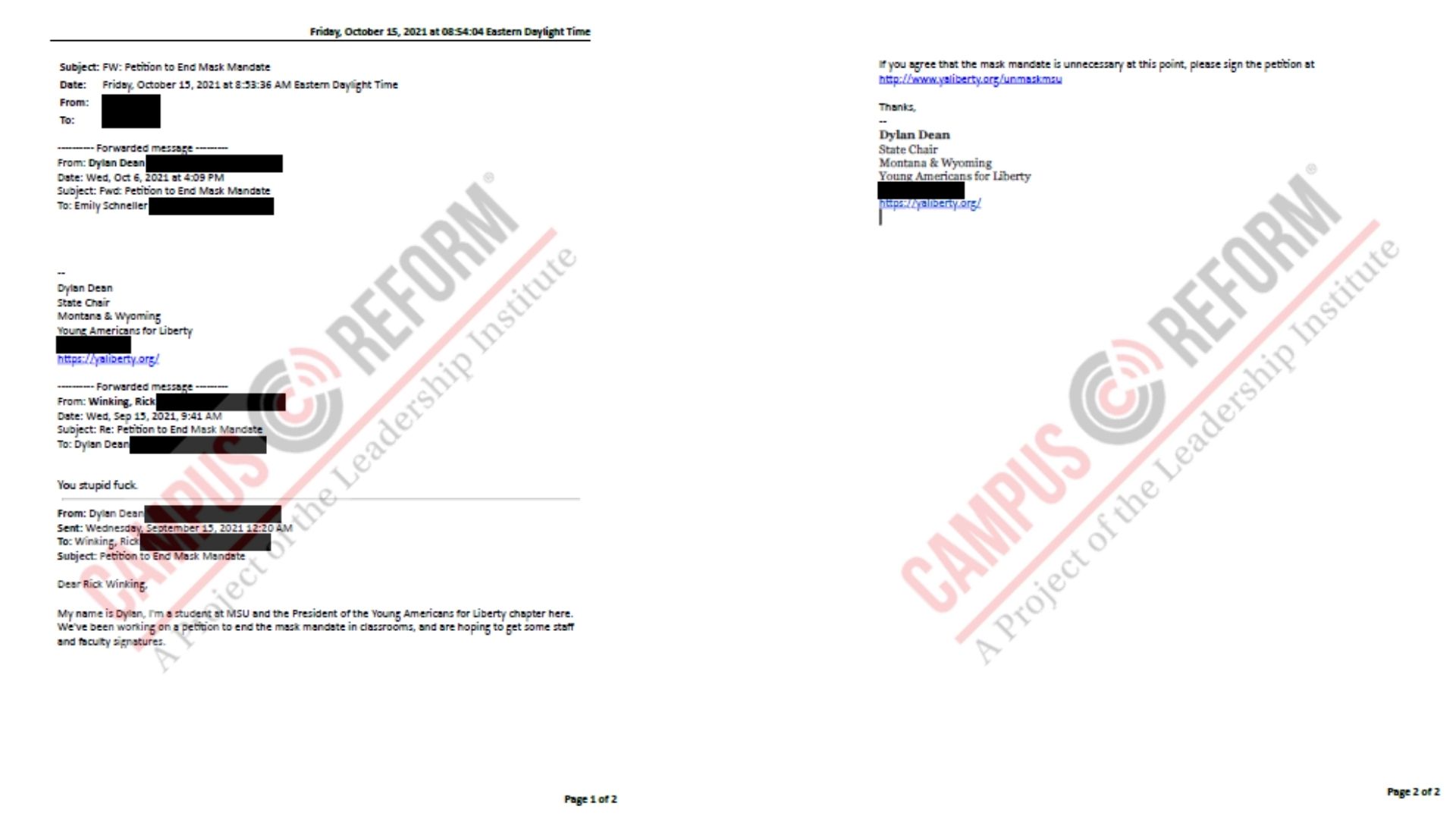 This petition came after the Dean of Students sent an August 26 email to all students stating that face masks must be worn in “indoor instructional spaces.”

That communication appeared to contradict an August 17 email from Cruzado that stated, “each of us will voluntarily wear a face mask.”

The mandate has since been expanded to include "indoors in hallways, offices, the library, the Strand Union Building, MSU residence halls and dining halls."

In response, Dean commented that it “seemed like the administration back stabbed students on this and had always planned to.”

Dean also told Campus Reform that the petition has currently been signed by 1,127 students and believes it may be the “largest petition in MSU history.”

The petition was not only circulated to students but to all MSU staff members as well.

Dean has since received an email from the former Director of INSIGHT, Alcohol and Drug Assistance Center, Rick Winking, stating, “You stupid f**k.”

Seth Pincus, professor of Antibody Biology and Medicine, also sent Dean an email that states, “Honestly, I think you are a selfish idiot…” 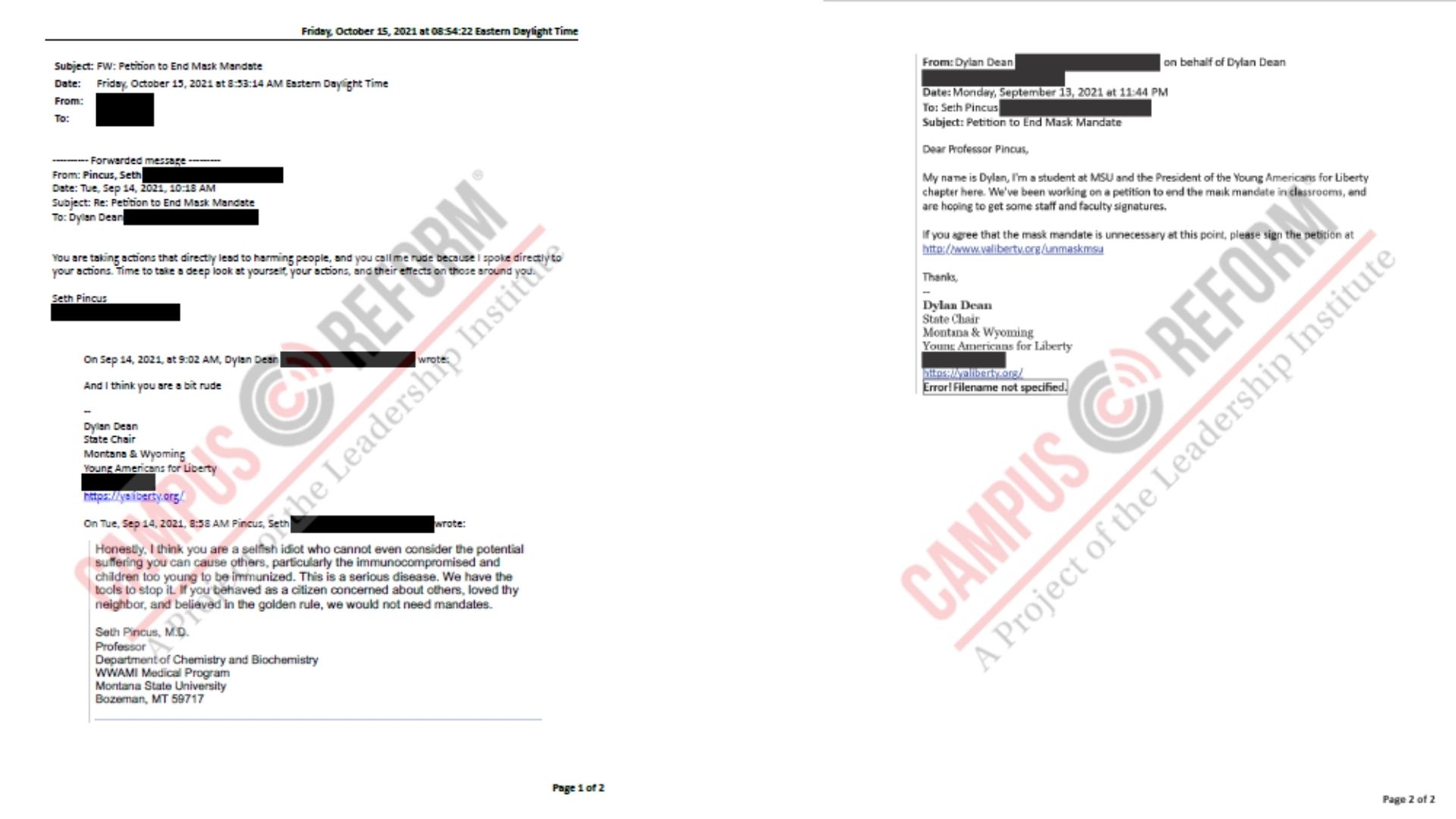 MSU YAL Vice President Rachael Stevenson stated in an email to Campus Reform that it's disappointing to see staff behave in such a manner.

"It’s very disappointing to see staff members treat students this way just because they hold different beliefs," Stevenson said. Colleges claim to be an open space for freedom of thought and yet MSU attacks students for practicing these rights. It is discouraging to know that members of staff feel it is acceptable to treat students this way."

Editor's Note: Campus Reform received the following statement from the Montana State University: "Mr. Dylan Dean, who collected the petition signatures and who had been incorrectly representing himself as a current MSU student, was offered several means to submit the petition to the president’s office, including email and hard copy delivery. He refused each of those options, and, ultimately, the dean of students reached out to Mr. Dean and brought the petition to the president’s office."

Dean told Campus Reform that he is taking this semester off, but is still the chair of YAL and is enrolled for school next semester. That story aligns with Inside HigherEd's reporting on the incident.

MSU's Office of the Registrar subsequently told Campus Reform that "Dylan Dean was a student here at Montana State University from Fall of 2019 to Spring 2021."

Campus Reform reached out to President Cruzado for comment but did not receive a response in time for publication.