These universities are paying for menstrual products in men's bathrooms

One male student told Campus Reform that it ‘contradicts basic biology’ and makes him question the quality of his education.

Universities across America are funding the inclusion of tampons and menstrual products in men’s restrooms.

At Davenport University, a private university in Michigan, the products were supplied by the Panther Resource Closet, a campus center designed to provide food, hygiene products, and clothes to students in need.

“I'm absolutely appalled that Davenport would go out of their way to provide a product which is specifically intended for the opposite sex,” Davenport student Josh Buehler told Campus Reform. “It's not wanted or needed, and it contradicts basic biology to think that they are.”

Campus Reform obtained a picture of the menstrual products placed in the men’s restroom. 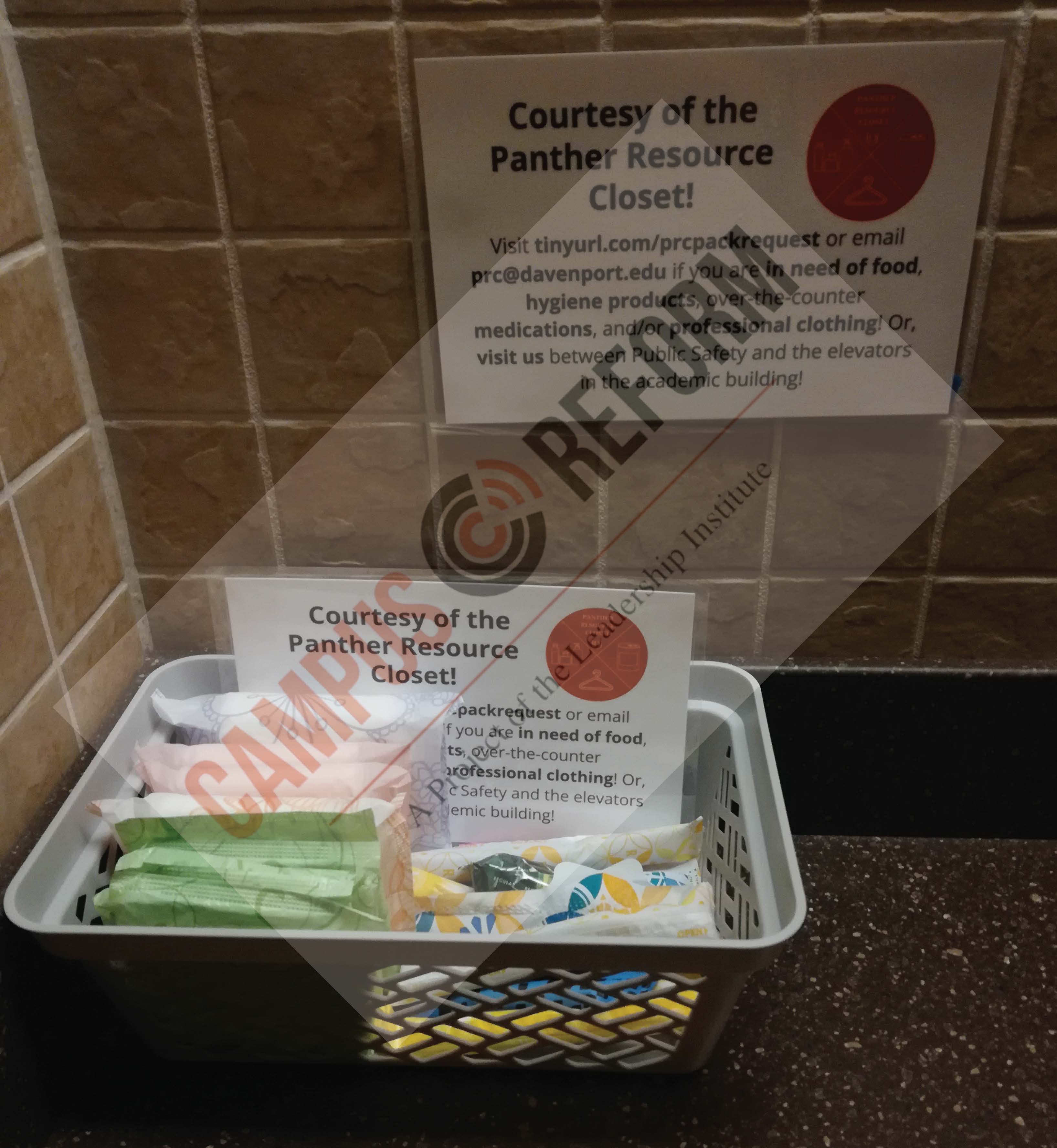 Tampons were also placed in men’s bathrooms as part of a “pilot program” at Western Carolina University, according to a video shared by the Twitter account Libs of Tik Tok.

The note above the tampon dispenser informed users that the products were paid for, in part, by student fees.

The School of Medicine at Washington University in St. Louis, which already supplies free menstrual products in women’s and all-gender restrooms, announced in a September press release that it plans on expanding the program to “accommodate menstruating people who identify as male” next year.

The trend is also prominent among Ivy League universities.

Cornell began supplying menstrual products to all bathrooms in 2020. To show gender neutrality, these baskets were originally labeled “mxnstrual” products.

However, the program now recognizes that the “men” in menstrual is not indicative of gender and will be changing the labels.

“FPP [Free Period Products] is in the process of changing their signage, switching ‘mxnstrual’ to ‘menstrual,’ recognizing that menstruation is not a strictly gendered term,” the Cornell Daily Sun reported.

Vanderbilt University also released a plan early in the fall 2021 semester to supply both men and women’s restrooms with free tampons. The organizer credits Princeton for pioneering the program.

Princeton University’s program has been in place since the fall 2019 semester.

Even before Princeton launched its program, Brown University student government leaders were hand-delivering menstrual products to men’s rooms in 2016.

Brown University spokesman Brian Clark clarified that the initiative ended in 2018 when the university’s facilities team took up the cause. He told Campus Reform that the university now only provides free menstrual products in women's and gender-inclusive restrooms.

[RELATED: Harvard calls women 'birthing people' because 'not all who give birth' are women]

“When I enrolled, I knew that most colleges were very liberal and I expected to deal with some bias at Davenport,” Buehler said. “Most of the professors are good at keeping politics out of the classroom, but I was not expecting the administrators to be so biased towards leftist ideas.”

Buehler has experienced bias from administration before. Two years ago, he says his pro-life group, Protect Life, had the police called on them by the school for refusing to take down a “Cemetery of the Innocents” flag display representing the number of abortions performed yearly, which they had reserved space for a month in advance.

But the university’s latest decision to supply tampons for men has made him more skeptical.

“The fact that they would do this makes me question the quality of my education,” Buehler said.

Campus Reform reached out to Davenport University, Western Carolina University, Washington University in St. Louis, Cornell, Vanderbilt, and Princeton but did not receive a response.