A university representative confirmed the protest took place and resulted in a graffiti and a 'smoke device' being 'let off' on campus.

A group of anti-police protestors recently vandalized the University of California Davis campus in a demonstration that involved setting off smoke bombs and graffitiing school property, witnesses told Campus Reform.

Jenna DiCarlo, chairwoman of the UC-Davis College Republicans, said that the incident began as a peaceful demonstration against policing.

However, “at some point people went around and vandalized the signs of the UC police and fire departments, as well as the sidewalk,” DiCarlo said. “They also had smoke bombs that they placed outside of facilities along with a giant wooden pig that said ‘we will outlive policing.’”

Karen Nikos-Rose, associate director of news and media relations at the university, told Campus Reform that the protest marked the ten-year anniversary of the “pepper spray incident.”

“A group marched from the campus center to the Police/Fire building,” Nikos-Rose said. “Protesters let off a smoke device outside the building and spray painted a sign. The protest dispersed about 5:30 pm.”

DiCarlo said that UC-Davis “Cops off Campus” group was responsible for the protest. A recent post to the group’s Instagram page shows the aftermath of the vandalism, along with the caption, “looks like folks were busy on Thursday…”

Campus Reform obtained photographs that depicted the same acts of vandalism shown in the university's Cops off Campus Instagram account.

The photos depict anti-police slogans spray-painted onto campus property including “ACAB” and “F**k 12,” both examples of explicit anti-police slang. 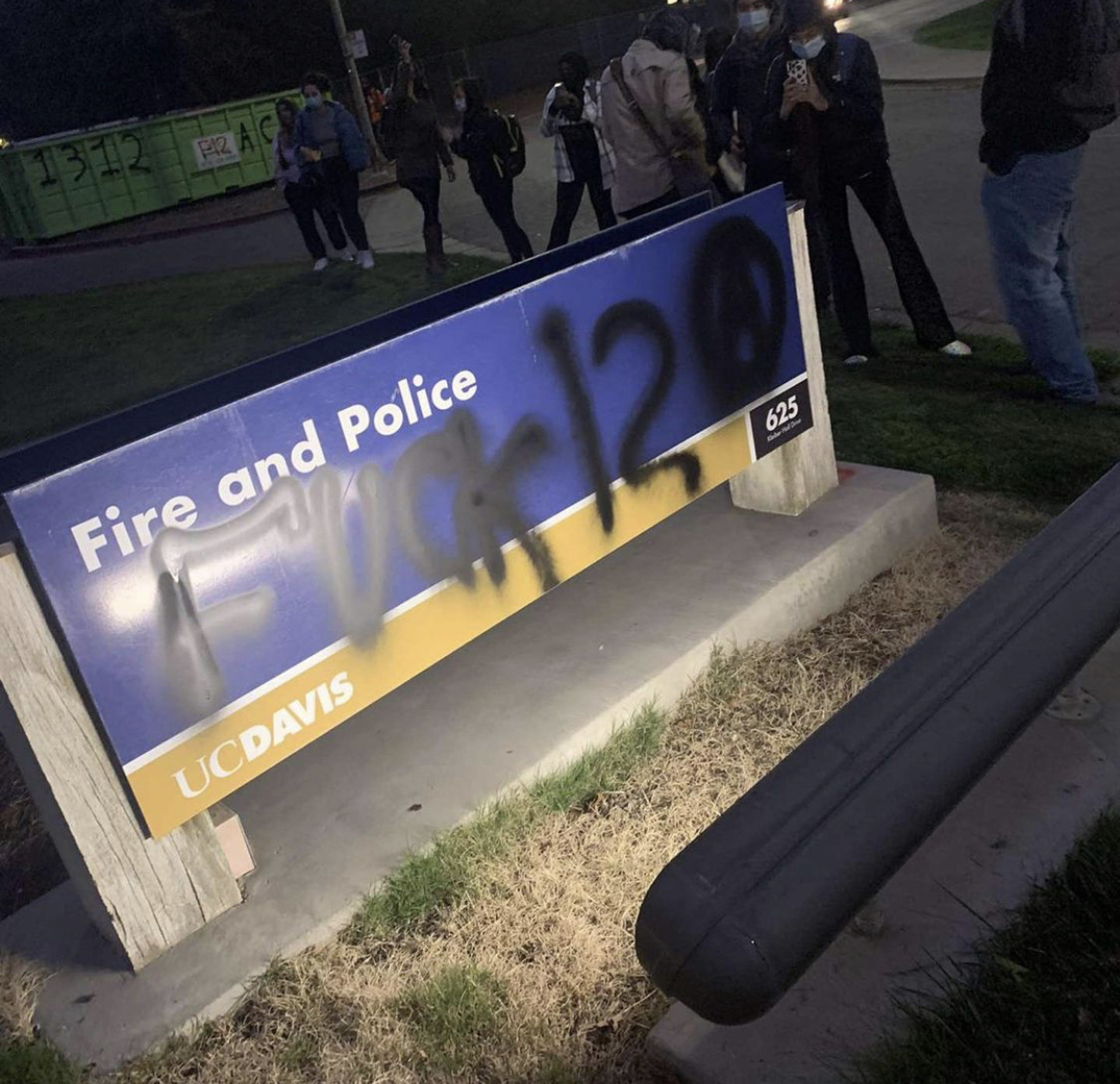 As of this writing, the university has not responded to Campus Reform's request to comment on the other incidents of vandalism depicted in those photographs.

Additionally, “Cops off Campus” has not responded to Campus Reform’s request for comment.

A university press release issued prior to the event outlined the measures the school has taken since the pepper spray incident.

Acting on the recommendations of its Campus Safety Oversight Committee, UC-Davis has adopted steps which include “defunding” it’s police department by “reallocating funds and reconfiguring staffing.”

Other changes include adopting a “restorative justice program and new approaches to mental health crises; regular review of the arming of police; increased transparency; and ongoing review and dialogue to ensure the campus Police Department is meeting the community’s needs.”

Speaking on behalf of the UC-Davis College Republicans, DiCarlo said:

“We actively condemn these acts of vandalism across campus at the Cops Off Campus rally. These radical, left-wing students do not speak for us nor the rest of the community who support our police and want them to remain present on campus. Police are here to protect us, and it is imperative that they stay on campus in order to do so.”

Nikos-Rose also shared the following statement from the university regarding the status of the campus police department.

“Despite media reports, UC Davis is not eliminating its police department,” the statement said. “In fact, UC Davis has spent the last decade listening to our campus community and learning how to create an environment where everyone feels safe and welcome. Over the last four years particularly, the UC Davis Police Chief has been the primary driver and leader of positive change, in collaboration with students, staff and faculty.”

The statement continued, “These modernizations reflect needs for better engagement with our community, improved transparency through crime analytics, increased training for responding to community members in mental health crises, and adding officers trained to respond to reports of sexual violence. In addition, we have added four officer positions to our Sacramento campus. We look forward to sharing best practices as we continue to serve as a model for modern campus safety practices.”

Campus Reform reached out to the UC Davis Police Department; this article will be updated accordingly.

Wyatt Eichholz is a Senior Alabama Campus Correspondent, reporting liberal bias and abuse on college campuses. He is a student at the University of Alabama studying economics. Wyatt is also Vice President for the UA Young Americans for Freedom chapter and produces a podcast for the RUF ministry at UA.