Campus Reform covered an anti-Israel protest at the University of Texas at Austin campus.

The organization responsible has a history of radical activism at the school.

The student organization Palestinian Solidarity Committee at the University of Texas at Austin hosted a protest Jan. 23 in front of the Texas legislature, demanding that Texas stop supporting Israel. The group also called for an intifada, or uprising, during the "Hands off Palestine" demonstration.

One organizer said the group was protesting to “resist the occupation and colonization of our lands,” using the terms “genocidal campaign” and “ethnic cleansing,” and claiming that such alleged activity “being funded by our taxpayer dollars here in the US.”

Throughout the protest, the group changed a number of chants including “from the river to the sea, Palestine will be free,” “there is only one solution: intifada, revolution,” “intifada, intifada, long live the intifada,” and “when people are occupied, resistance is justified.”,

Another chant at the event was, “From Palestine to Mexico, all the walls have got to go." 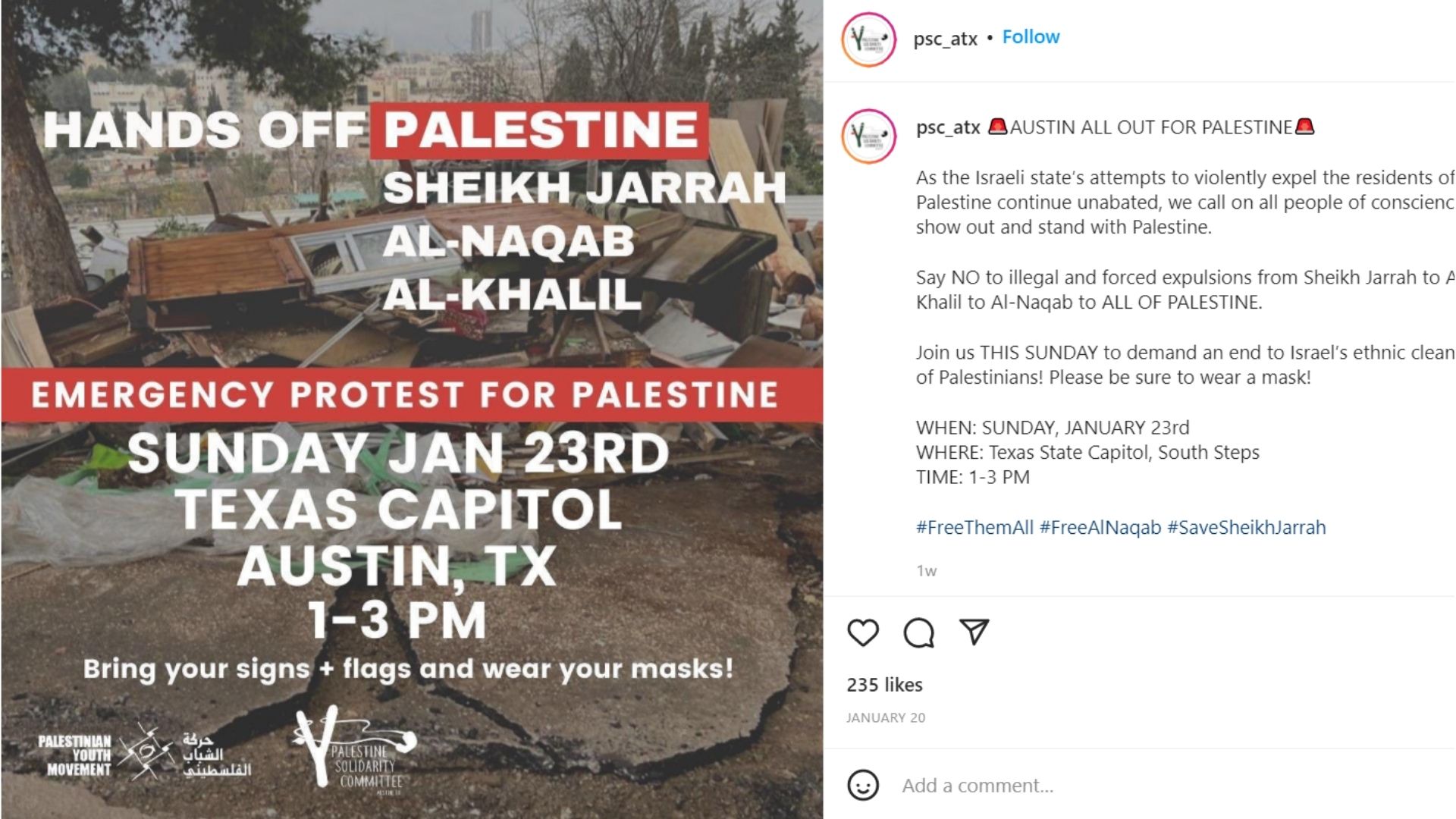 The group carried three large banners that read “Ongoing Resistance,” “We Will Remain,'' and “Defend Jerusalem.”

Other signs read “boycott apartheid”, “no more $$ for Israeli crimes of occupation”, “Jews Fall of the Israeli State”, and “From Palestine to the Phillipines, stop the US war machine.” They also flew multiple Palestinian flags.

Additionally, the organizers passed out pamphlets that stated that the organization's principles are “dedicated to upholding the call for BDS (Boycott, Divestment, and Sanctions), uplifting Palestinian leadership, coalition building and solidarity, anti-capitalism, anti-imperialism, anti-racism, and anti-sexism.” The pamphlet also stated that the group teaches members about “Palestine 101, Anti-Blackness in Israel, and Student Politics and Resistance.”

Throughout the protest, passerbys, both pedestrians and vehicles, chanted or honked in support of the group.

The students dispersed after about two hours. 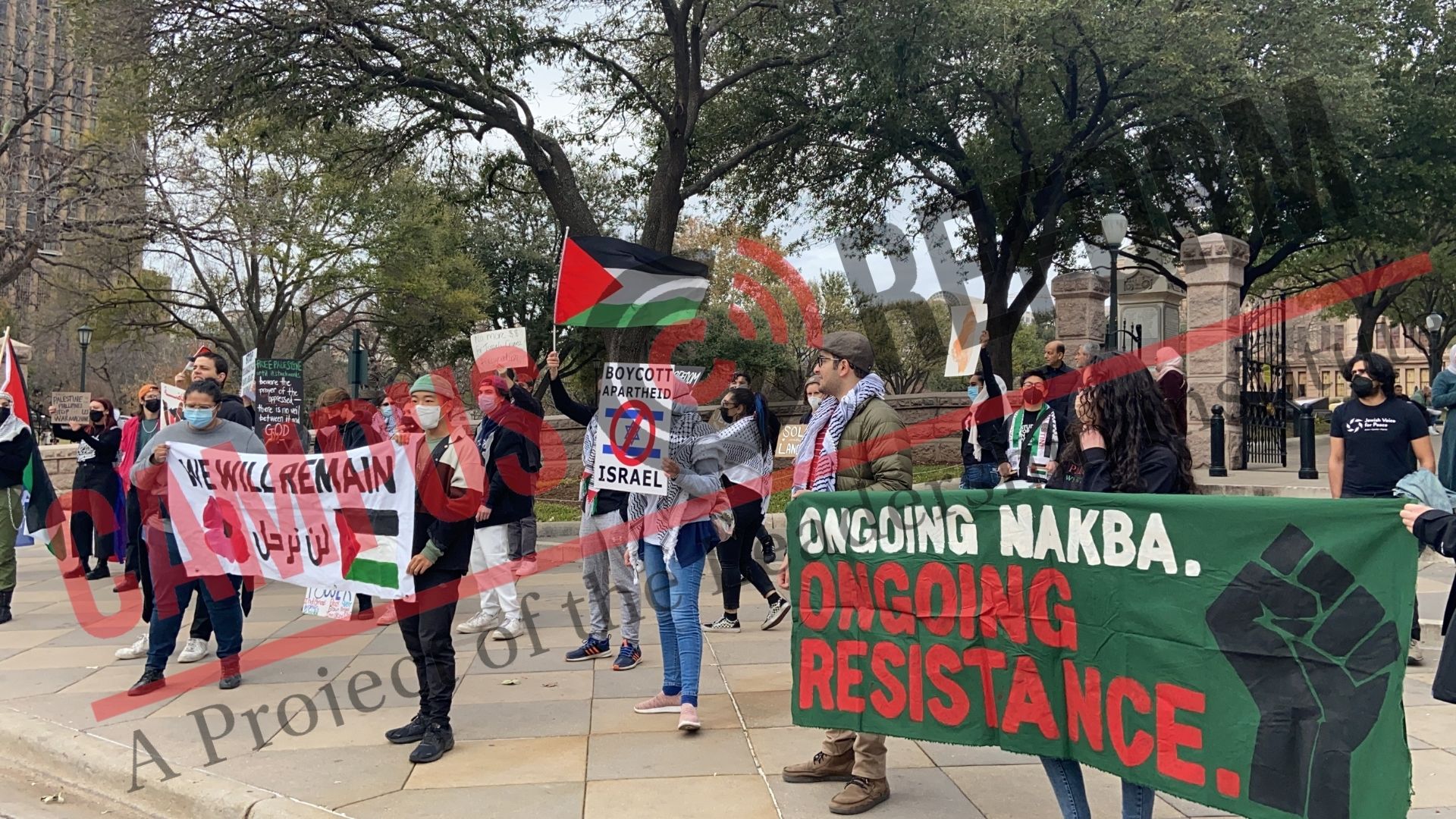 This protest is just one in a series of anti-Israel protests carried out by this organization.

Last semester, the organization tried to silence an Israeli speaker on campus that came to speak about Israeli intelligence. During that protest, the protesters carried banners reading “War Criminals Off Campus”, and “To Exist is to Resist.”

"[W]e will be hosting an introductory lesson and discussion on Palestine that explores questions of Palestinian history and the struggle for liberation against Israeli settler-colonialism and apartheid," the event description read.

The protest organizers refused to answer questions. Campus Reform has reached out to the University of Texas at Austin and the university has no comment.

Sterling Mosley is a Texas Campus Correspondent with Campus Reform. He is a senior at the University of Texas - Austin, majoring in government, history, and international relations. Sterling is the Managing Editor for The Texas Horn, an officer of the Young Conservatives of Texas, a writer for the DC Enquirer, a representative in Student Government, a Brumley Undergraduate Scholar, and is currently interning at the Texas Public Policy F...