'Dumb and obnoxious': Socialist flyer found on campus gets ridiculed

At the University of California San Diego (UCSD), students oppose the socialist posters put on display by the school’s Young Democratic Socialists of America (YDSA) organization.

​'It is unnuanced and in bad faith,' Rob Santiago, a student at the university, told Campus Reform.

“I first saw these posters when I was walking on my way to class," McKenzy Tolliver told Campus Reform, noting that the socialist message didn't appear to take into account that Californians already pay high taxes.

The flyer rhetorically asks “What is Socialism?” and states, “Socialism and Capitalism are economic. They deal with what your hob is and who is in charge. Capitalists believe that the workplace should operate like a dictatorship, where one person calls all the shots, the CEO."

Campus Reform spoke with multiple UCSD students about the flyer, which the YDSA at UCSD chapter also posted on its Twitter.

“Socialism has always preached the idea that they believe in equality, but when it is put into practice, it usually gives everyone the opportunity to be equally poor," San Diego student Jordan Eide said.

"It is unnuanced and in bad faith," Rob Santiago, a student at the university, told Campus Reform.

One user, who received 146 upvotes, commented, “When you misrepresent both sides so that your side looks good.” 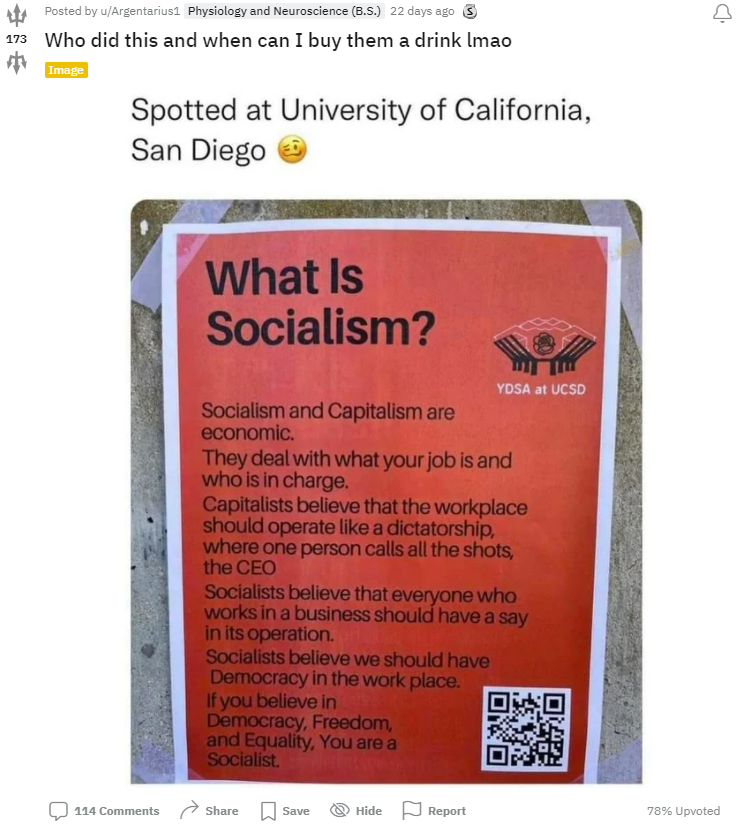 A different user responded, stating, “It’s pretty exaggerated I agree.” An additional user wrote, “The poster is meant for recruitment so it was purposefully made to be an exaggeration. Very few people would feel inspired to action by cold and accurate descriptions of ideology.”

Following this comment, a fourth user replied with, “It's one thing to sell a position, but that just isn't actually what those words mean, even in spirit. And the last sentence is dumb and obnoxious.”

Currently, there are 111 recognized YDSA chapters across the nation, according to the national organization's directory. The YDSA platform declares that socialism is “the democratization of all of society in order to end oppression, exploitation, and domination.”

"I am not surprised to see these types of posters because of the political leaning I see in the majority of the student body," Tolliver said.

Campus Reform reached out to UCSD and its YDSA chapter but has not received responses.