'Shame on LMU': Students react to tampons in men's restroom at Catholic university

Conservative groups on campus and at the state level have expressed their opposition to the change.

Campus Reform obtained photos of the dispenser from the California College Republicans (CCR).

The decision by the university to incorporate feminine products in the men’s restroom raises safety concerns for women on campus, according to the CCR.

"We are disappointed in LMU for advancing woke gender ideology — not only for the fact that it is supposedly a private, traditional, Catholic university — but for the fact that encouraging these choices furthers mental health issues and can potentially lead to instances of rape,” the CCR told Campus Reform.

“Separate bathrooms are maintained for the privacy of the two biological sexes, and unfortunately there are predators of both sexes who can use these opportunities to invade the privacy of the opposite sex, claim they're ‘trans,’ and then engage in degenerate sexual behaviors or even worse, assault someone. Something that has already occurred numerous times across the country due to these policies.”

The CCR acknowledge that sexual assault is a recurring problem across the country and alleged that the spike may be a result of implementing such gender-inclusive policies.

[RELATED: After SGA failed to kick Jeff Sessions off campus, protesters staged a walk out]

The statement continued to condemn the adherence of the university to the change.

“Shame on LMU for putting students in physical and emotional danger and encouraging mental disorders."

The California College Republicans posted a picture of the dispensers on Instagram, releasing a statement condemning the university for "appealing to politically progressive trends" in California. 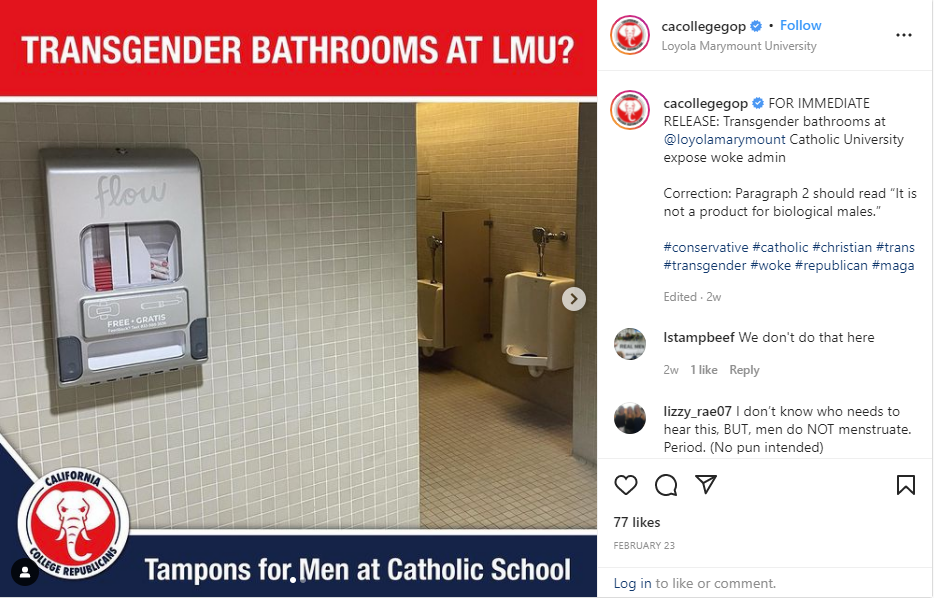 The statement says the university should be promoting "traditional Catholic and, more specifically, Jesuit values,” has hosted a fundraising event for Planned Parenthood last year as another instance of LMU bending to progressive pressure.

Will Donahue, chairman of the California College Republicans, called the university's decision to put tampons in male bathrooms "tragic."

He bemoaned the university for so easily caving to "woke societal pressures" and stressed the importance of religious universities maintaining their religious characteristics.

"LMU is not a secular school," Donahue asserted "and to allow such progressive trends to prosper and thrive at this university only further detracts from its core roots."

He concluded by stating that "[religious] schools should not compromise their beliefs to accommodate an ever changing and unpredictable culture."

Efforts to put feminine hygiene products in men's restrooms have become commonplace across American universities as part of a larger movement to accommodate transgender students.

The Catholic Church rejects gender ideology and some high-ranking church officials caution against its manifestation in academic environments.

As such, this isn't the first time LMU has been caught up in a controversy regarding its handling of gender issues.

At LMU, the university has dubbed the Office of LGBT Student Service, which "provides educational and support services to students that identify as LGBTQIA+ and allies" by "promoting equality, visibility and inclusion of LGBTQIA+ students within the LMU community."

Per the office's webpage, the office "place[s] a particular emphasis on these intersections as they relate to the University ethos of Interculturalism and the principles of Catholic Social Teaching."

The Campus Pride Index, which rates colleges and universities based on how accepting of LGBT individuals they are, gives LMU a score of four out of five.

Every individual and organization named above has been reached for comment; this article will be updated accordingly.