In the YouTube video, Crowder states that he was invited, as Sea Matheson, to review a manuscript for 'Fat Studies: An Interdisciplinary Journal of Body Weight and Society' by keynote speaker Ester Rothblum.

Commentator and Blaze Media Podcast host Steven Crowder wrote a joke paper titled "Embracing Fatness as Self-Care in the Era of Trump" that was not only accepted by a fat studies conference at Massey University (New Zealand) but earned him a chance to speak at the scholarly gathering.

After being invited to present his findings virtually at the 2020 Fat Studies New Zealand conference by former Chairwoman Cat Pausé, Crowder adopted the false identity of activist Sea Matheson to present his artificial findings.

Steven Crowder submitted a paper called "Fatness as Self-care in the Era of Trump" to an academic conference at Massey University using the name "Sea Mattheson."

The paper, which is every bit as absurd as you imagine, was accepted pic.twitter.com/pbVr0Sntfh

Pausé, who reportedly passed away on Saturday, was a senior lecturer at Massey’s Institute of Education and a Fat Studies researcher.

Crowder released the presentation video on Mar. 21 on his YouTube channel.

“Because of our current leader's bigotry, fatness, I will argue, acts as a distancing mechanism from the President, as well as his supporters, producing both physical and ideological space that can insulate the individual from intolerant, bigoted, or violent ideology,” Crowder said during his presentation in the persona of Matheson.

“Trump’s fatphobia even reaches into the United States international relationships,” he continued. “In his dealing with North Korea leader Kim Jong Un, Trump referred to the leaders as, ‘short and fat.’”

Sea Matheson was featured in the event program, which is still available on the conference website. 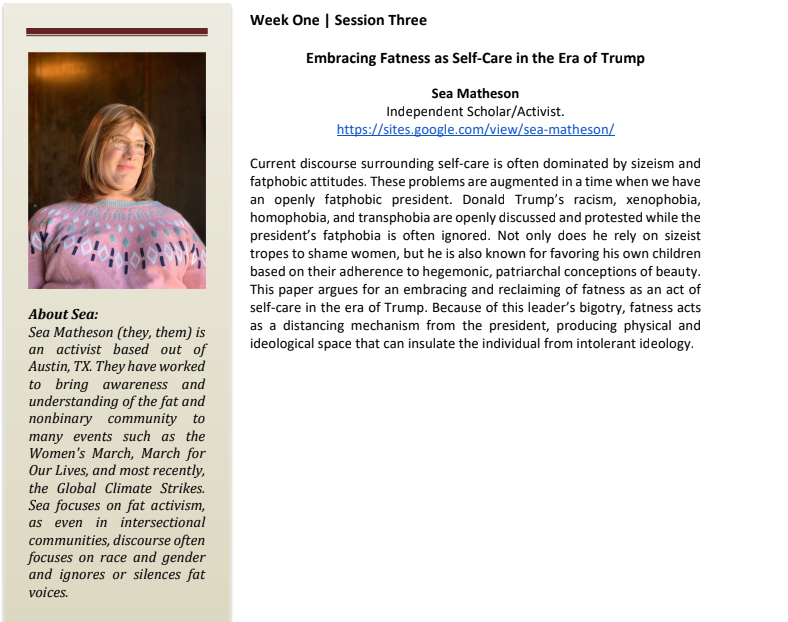 The bio states, “Sea Matheson (they, them) is an activist based out of Austin, TX. They have worked to bring awareness and understanding of the fat and nonbinary community to many events such as the Women's March, March for Our Lives, and most recently, the Global Climate Strikes.”

“Sea focuses on fat activism, as even in intersectional communities, discourse often focuses on race and gender and ignores or silences fat voices,” the description says.

The conference program does provide a disclaimer that, “The Organising [sic] Committee accepts no responsibility for the accuracy of the abstracts contained in this Programme. This responsibility remains with the author(s).”

In the YouTube video, Crowder states that he was invited, as Sea Matheson, to review a manuscript for “Fat Studies: An Interdisciplinary Journal of Body Weight and Society" by keynote speaker Ester Rothblum.

Rothblum's talk for the conference, “Fat Studies: Past, Present, Future,” discussed topics such as early books on fat activism and scholarship, fatness as a moral panic, intersectionality, media coverage of weight, the way in which children’s literature reflects societal oppression, the Health at Every Size movement, and the need for fat people to organize.

Crowder’s stunt is not the first to dupe academics.

In 2018, James Lindsay, Helen Pluckrose, and Peter Boghossian also had seven fake papers accepted into academic journals, including one about “rape culture and queer performativity” at dog parks and another that was a feminist rewriting of Mein Kampf.

Campus Reform reached out to Steven Crowder, Massey University, and Esther Rothblum for comment; this article will be updated accordingly.

Campus Reform also reached out to Cat Pausé before the professor's death.