Campus Reform reported on the university’s issuance of three 'no contact orders' against SIUE art therapy graduate student Maggie DeJong after several of her classmates characterized her speech as 'harassment' and 'microaggressions.'

After a Feb. 23 letter from Alliance Defending Freedom (ADF) attorneys threatened legal action, Southern Illinois University Edwardsville (SIUE) recently dropped its “no contact” orders against a graduate student who had shared her religious and political views.

Campus Reform reported on the university’s issuance of three “no contact orders” against SIUE art therapy graduate student Maggie DeJong after several of her classmates characterized her speech as “harassment” and “microaggressions.”

ADF media relations specialist Ellie Wittman told Campus Reform that one of the reasons DeJong was issued these orders was because of a statement she made during a text exchange between DeJong and a fellow student.

“My personal held beliefs are grounded in objective truth by the gospel of Jesus Christ,” DeJong had reportedly said.

An art project titled the “Crushing Weight of Microaggressions” hanging at SIUE included DeJong’s exact quote from the text conversation.

Campus Reform obtained a picture of the project. 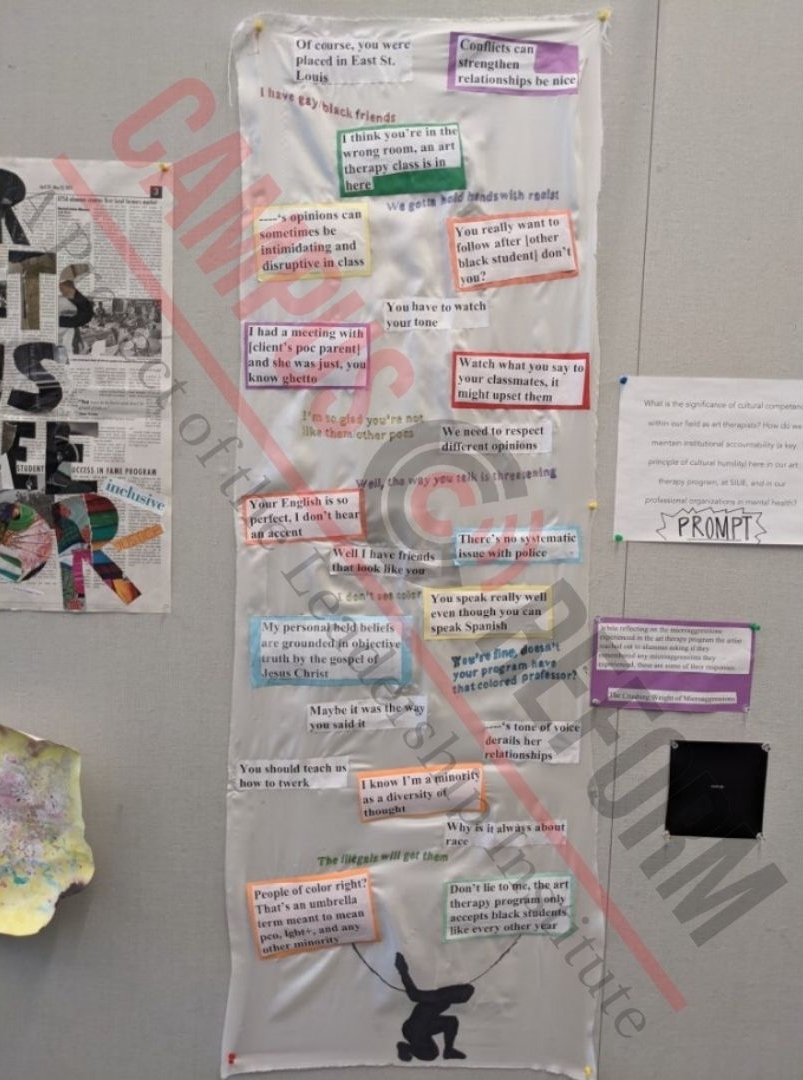 “Maggie’s expression of her religious beliefs was one of the reasons that the school issued no contact orders,” Wittman said.

Campus Reform also obtained a redacted copy of the “no contact” orders sent to DeJong. 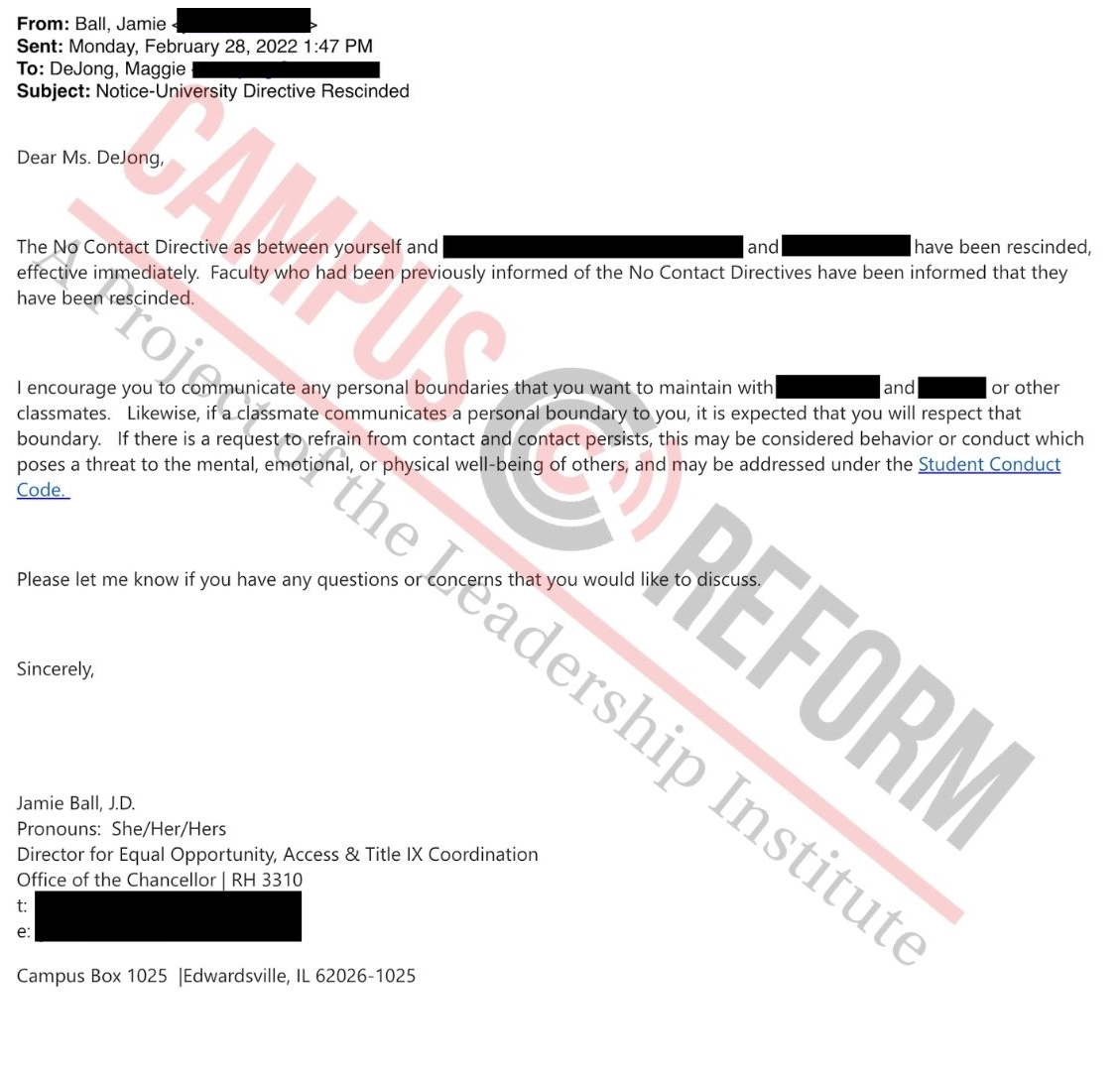 “This order is being issued upon information and belief that interactions between yourself and [redacted] would not be welcome or appropriate at this time,” the order read.

It also made clear that an “infringement” of the order could result in “disciplinary consequences.”

In response to the orders, Alliance Defending Freedom sent the letter demanding that the university “rescind” the orders or else “legal action” would ensue.

Within days of obtaining the letter, the university reversed the no contact orders.

Campus Reform obtained the redacted email notifying DeJong that the university directive filed against her was “immediately” rescinded. 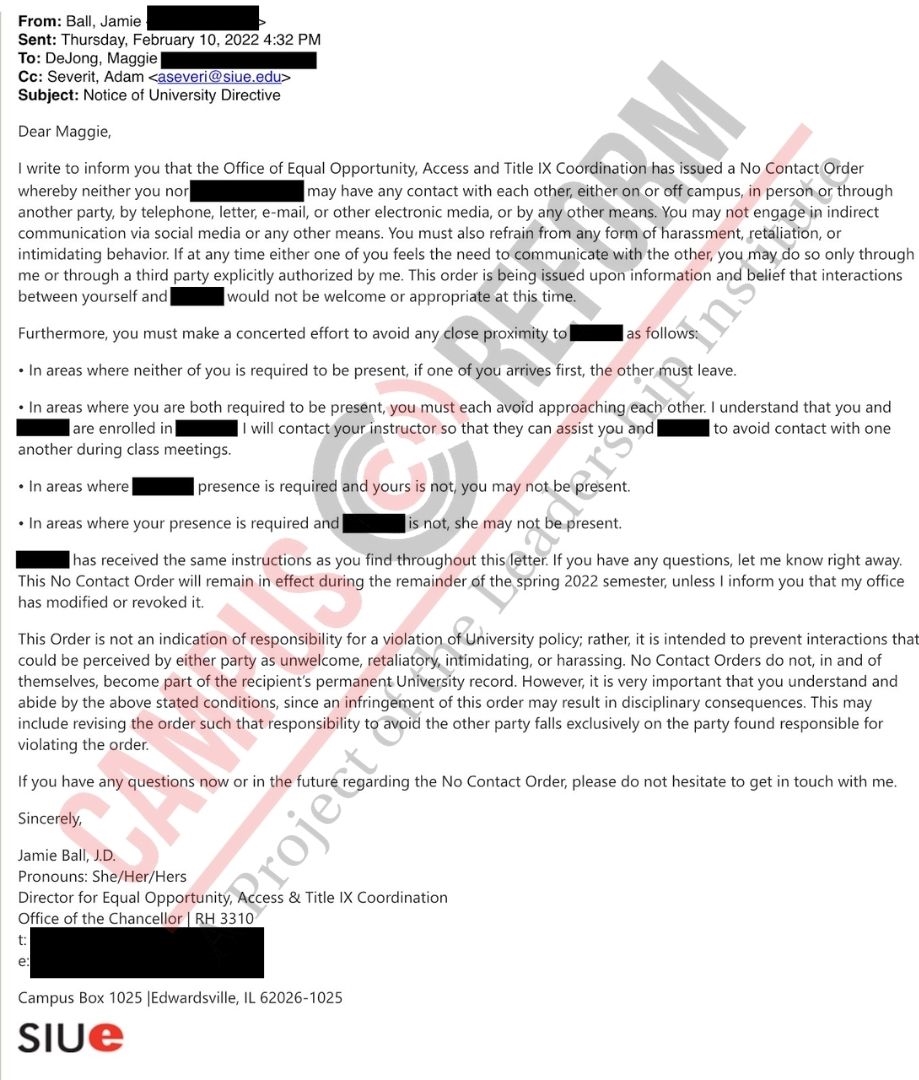 Campus Reform spoke to DeJong about the news. She revealed she is “glad.” However, she continued by pointing out that the “damage has already been done.”

“Because of these orders, I was unable to fully participate in my classes, go to certain locations on campus when the other students were present, and fully take part in the academic program. Students should not be bullied and intimidated because of their viewpoints and I hope that the university will never let this happen again,” DeJong said.

ADF senior counsel and Center for Academic Freedom director Tyson Langhofer told Campus Reform that he is “pleased” the orders were rescinded.

“But this never should have happened in the first place,” he continued.

“The university discriminated against Maggie for her religious viewpoint simply because several students complained. This is wrong - universities cannot ban students from speaking to fellow students simply for peacefully expressing their views,” Langhofer concluded.

Campus Reform reached out to SIUE director of media relations Megan Wieser for comment. Wieser said that the “university has no comment at this time.”