Below is a sampling of their tweets.

Assistant professor of history at Sam Houston State University Benjamin Park spoke for many liberals in his field when he said the news was "absolutely gutting."

Johnathan Perkins, the director for race and equity at the University of California Los Angeles who previously made headlines after wishing death upon the lone black Supreme Court Justice Clarance Thomas, said that "the bad guys are winning."

This is very bad.

The bad guys are winning.

Like many others in academia, Perkins made a call to action, "Tomorrow, we take to the streets."

Tomorrow, we take to the streets.

Tuesday May 3rd, 5pm local time at your courthouse. Sign pledge below. pic.twitter.com/J1p1LX96kK

A "Duke Ph.D.-bound" student "researching queerness, slavery, and blackness in colonial Latin Am. & the Caribbean" named Jose Sanchez took it a step further.

actually, now is a good time to go on strike and shut down entire cities, ports, and warehouses. harass our lawmakers and protest outside their homes and galas. make summer 2020 look like a fucking picnic. https://t.co/d44VAto3SW

The riots that took place in the summer of 2020 following George Floyd's death caused over $2 billion in damage according to the World Economic Forum.

Keri Leigh Merritt, an historian with a Ph.D. from the University of Georgia, suggested a largescale strike as well.

We need protests not endless millions poured only into elections. The majority support access to abortion but cant see themselves as a majority w/o demonstrations. The autocrats in SCOTUS cant feel their illegitimacy w/o protests.We cant rebuild a movt w/o movement in the streets https://t.co/LuAkPINu0F

Monmouth University Professor Hettie V. Williams called the Supreme Court justices who will likely vote to overturn Roe v. Wade "monsters," stating "[s]ome of you still refuse to realize we are teetering on the brink of fascism."

These monsters want to roll the clock back to 1953 or further. In a fascist state, do you think Loving vs. Virginia is safe? Brown vs. Board? Obergefell? None of these rulings are safe. Some of you still refuse to realize we are teetering on the brink of fascism.

No one should be able to tell anyone what they can or can’t do with their bodies. Period.

Knight Chair at Howard University and "1619 Project" author Nikole Hannah-Jones tweeted, "You can’t understand the court overturning Roe without understanding the role racism has played in the rise of the religious right."

You can’t understand the court overturning Roe without understanding the role racism has played in the rise of the religious right and no reporter should report on this without talking about what may come next: Rulings against civil rights.

University of Pennsylvania law professor Dorothy Roberts tweeted, "the state violence spreads" as a result of what she calls an "assault on reproductive freedom."

The assault on reproductive freedom is atrocious for most people, but Black women are more likely to seek abortions, more likely to die from pregnancy-related causes, and more likely to be criminalized & imprisoned for their pregnancy outcomes. Then the state violence spreads.

Desiree Weber, assistant professor of political science at the College of Wooster, retweeted a tweet by a Ph.D. student named Mike Dunford alleging that the leaked opinion implies only rights "designed to protect cis white men" are protected by law. 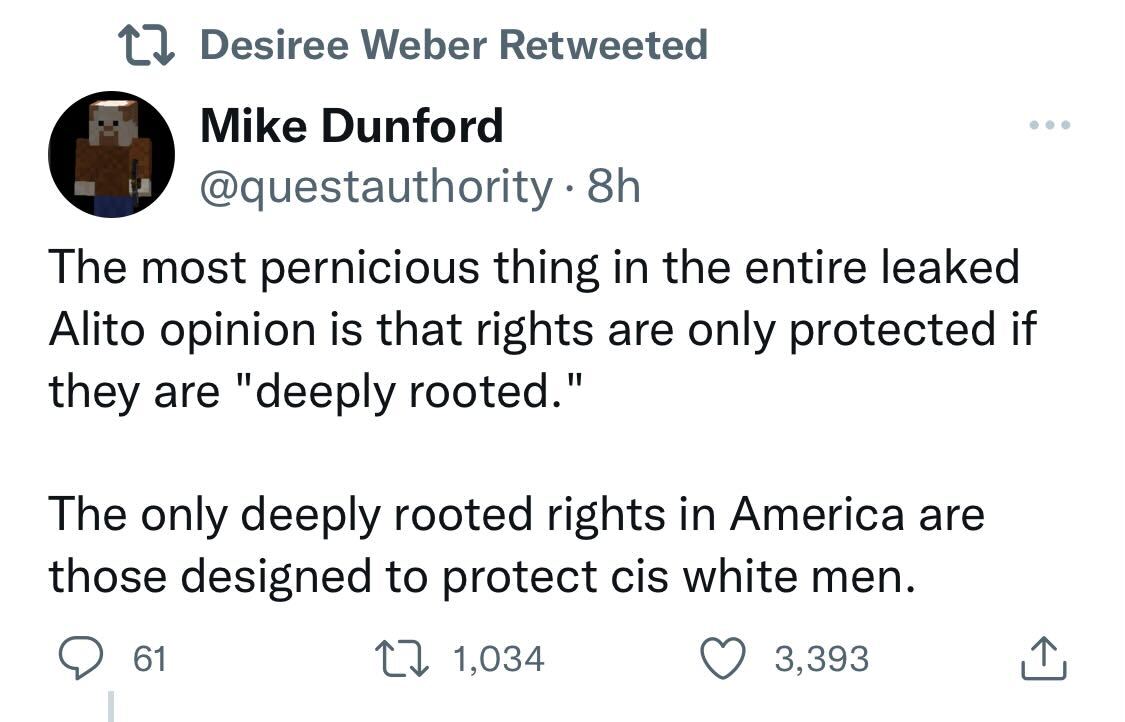 Dunford told Campus Reform, "As a legal academic, I'm quite pessimistic about the news," stating "This also puts all the progress made on LGBTQ+ rights issues squarely on the chopping block, and could even be read to call long-settled cases like Loving v VA into question."

Campus Reform reached out to all individuals mentioned. This article will be updated accordingly.