Dog names are racist, according to scholars

Academics recently applauded a Social Psychology Quarterly study purporting to show a disparity in the time dogs were adopted based on racial associations with the animals’ names.

'White' names, according to the study, resulted in shorter adoption times compared to 'Black' names.

Academics recently applauded a Social Psychology Quarterly study purporting to show a disparity in the time dogs were adopted based on racial associations with the animals’ names.

“White” names, according to the study, resulted in shorter adoption times compared to “Black” names.

The correlations were largely concentrated around pit bulls, “a breed that is stereotyped as dangerous and racialized as Black," according to the study.

Below are examples of academics’ reactions to the study.

Timothy Welbeck, director of the Center for Anti-Racism Research and an assistant professor of instruction, retweeted the story, posing the rhetorical question “WhY iS EveRyTHingG aBOuT rACE?”

“WhY iS EveRyTHinG aBOuT rACE?”

Because everything is about race… https://t.co/T2t7LrTcWP

He answers his own question with, “Because everything is about race...”

Welbeck told Campus Reform that “something as seemingly as [sic] innocuous as dog adoption can have lasting racial implications.”

University of Texas at Austin

Assistant Professor of Sociology Chantal Hailey commented in a now-deleted tweet obtained by Campus Reform, “Anti-blackness is so pervasive it even expands to dog names.” 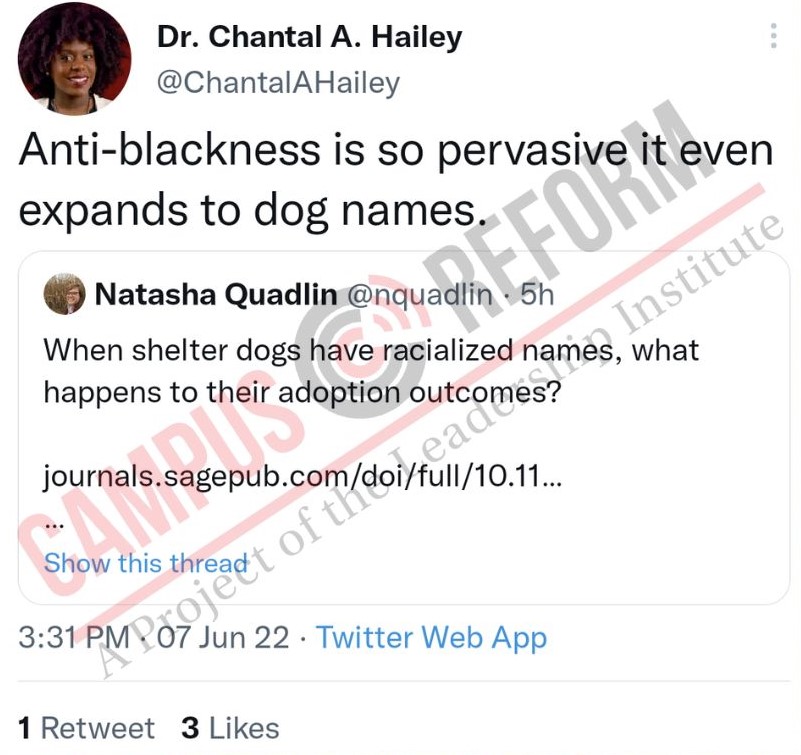 Hailey conducts research “at the intersections of race and ethnicity, stratification, urban sociology, education, and criminology.”

Don Moynihan, professor at Georgetown's McCourt School of Public Policy, opined that the study was an “[i]nteresting example of how racialized names still evoke bias even when dealing with non-humans.”

Interesting example of how racialized names still evoke bias even when dealing with non-humans. https://t.co/ef5wTvXfWk

Moynihan provided comments to Campus Reform, expressing his view that there exists “a relatively sophisticated body of work in this area that needs to be accounted for to understand the contribution.”

Chief Diversity Officer Nef Walker described the study as “Must read work”, and “Fascinating research that supports the resiliency of racialized names and the pervasiveness of antiBlackness [sic].”

Fascinating research that supports the resiliency of racialized names and the pervasiveness of antiBlackness. Must read work. https://t.co/5me6YhsbYh

Walker has written on [t]he intersection of race, gender, and sexual orientation in intercollegiate sports”, and “[h]egemonic masculinity and the institutionalized bias of women in men’s collegiate basketball.”

Natasha just doing her cutting edge work as usual, congrats to you and Bradley! https://t.co/9p9thvemL5

Campus Reform reached out to all parties mentioned here. This article will be updated accordingly.

Terrance Kible is a second-year law student at the Duquesne University School of Law. He hopes to pursue a career as a litigator focusing on conservative public-interest law. Terrance is a member of his university’s Federalist Society and Criminal Law Society.