Students at Harvard University were told that failing to use a person's preferred pronouns could be a violation of the university’s sexual misconduct and harassment policies during a mandatory online Title IX training last month.

The Power and Control Wheel clarifies that using the wrong pronouns constitutes abuse and is an “attempt to limit a person’s sense of self based on identity.”

Students at Harvard University were told that failing to use a person's preferred pronouns could be a violation of the university’s sexual misconduct and harassment policies during a mandatory online Title IX training last month.

The training, deemed "Preventing and Responding to Sexual Harassment and Other Sexual Misconduct (Harvard College, 2022-23),” included a "Power and Control Wheel," a resource tool that helps students stop “sizeism and fatphobia,” “transphobia,” “racism and white supremacy,” and “[c]ultural/[i]denity abuse.”

An image of the wheel was obtained by Campus Reform: 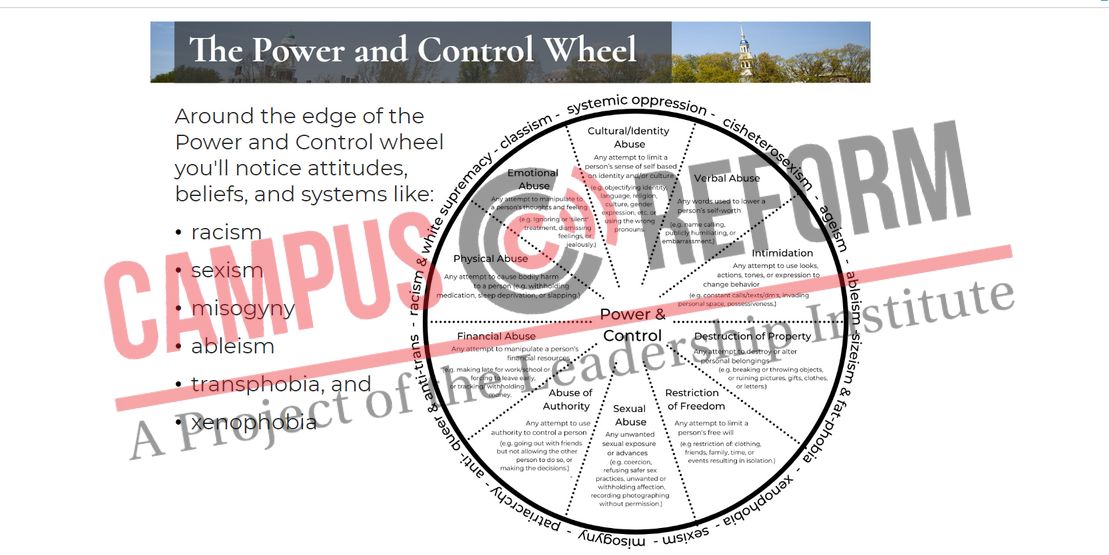 The Power and Control Wheel clarifies that using the wrong pronouns constitutes abuse and is an “attempt to limit a person’s sense of self based on identity.”

In another image obtained by Campus Reform, students are presented a series of scenarios in which they are told a story involving what is seemingly sexual assault and then asked to answer questions related to the scenario.

Scenario 3 informs the Ivy League students that “repeatedly using the wrong pronouns… and making remarks about… gender identity, contribute to a climate of disrespect and may also violate Harvard's policies.”

The course is supported by an array of faculty including the Harvard College dean, Rakesh Khurana, according to the Washington Free Beacon.

In a video introducing the training, Washington Free Beacon alleges that Khurana told students "We all have an essential role to play in creating a community that cultivates gender equity and inclusion… Completing this course is a critical step in establishing a shared understanding of the values here at Harvard College."

The attempt to broaden the definition of sexual abuse to include misuse of pronouns follows an onslaught of leftist ideology propagated by college Title IX offices.

In late 2021, for example, the Washington Free Beacon reported that Boston University held a mandatory Title IX training that required all students to ‘intervene’ if a woman is encouraged to have children.

The training offered the following scenario: “You’re in the cafeteria with two colleagues, Jessica and Kim, who is Asian. Jessica sees Kim’s phone background. It’s a picture of her and her husband. Jessica says, ‘Oooh, your husband’s White… You two have to have lots of babies… half-Asian babies are the cutest.’”

Boston University deems that Jessica is using “derogatory” language, and asks students what they should do in this scenario.

The correct answer: “Intervene. Kim might have felt uncomfortable about Jessica making comments about her race… or the prospect of having children.”

These instances stretch beyond New England, however.

Campus Reform, for instance, covered a story earlier this month of Richard Bugg, a theater professor and Department Chair at Southern Utah University (SUU), who was disciplined by the university for not using ‘they/them’ pronouns for one of his students.

While other news sources say that using the wrong pronouns will result in a punishment for students at Harvard, Campus Reform could not confirm that.

However, Campus Reform correspondent Zachary Lech did have this to say about the class:

“To me, it’s nothing more than virtue signaling, written with plausible deniability in mind… you can’t punish someone for using ‘wrong pronouns,’ but [Harvard] wants to misleadingly imply so.”

Campus Reform reached out to Harvard University, Dean Rakesh Khurana, the Office of Gender Equity, and both Title IX resource coordinators Erin Clark and Brian Libby for comment and will update accordingly.

Jared Gould serves as News Editor at Campus Reform. Prior to joining our team, Jared worked with former Governor Phil Bryant at Bryant Songy Snell Global Partners, a private government relations and business consulting firm in Ridgeland, Mississippi. He also previously worked in the Office of Governor Phil Bryant and The Faith & Politics Institute in Washington, D.C. He is a graduate of the University of Southern Mississippi.