Texas Tech University faculty members appear to be attempting to sabotage an event featuring Kayleigh McEnaney by encouraging people to reserve tickets with no intention of attending.

'Oh, goodie, a real live fascist is coming to town. Would be a real shame if we all registered for a free event ticket and then not be able to go,' one professor commented on Facebook.

Ali Duffy, a theatre and dance professor at TTU, shared a screenshot of an advertisement sent by Young Conservatives of Texas (YCT) chapter chairman Kenzie Gardner to her Facebook.

“Oh, goodie, a real live fascist is coming to town,” Duffy said. “Would be a real shame if we all registered for a free event ticket and then not be able to go!”

A TTU graduate, who requested to remain anonymous, told Campus Reform that she was frustrated by the professor's post.

She explained to Campus Reform that despite attending liberal events during her time at the Lubbock campus, she would have been interested in the McEnaney event, as well.

Other faculty members also appear to have pledged to reserve a ticket but do not intend to attend.

“Registering as many times as I can while drinking wine sounds like a perfect way to spend my Friday evening,” Sabrina Davis, an Assistant Librarian at TTU, said.

Mirandi Scolari, an Assistant Professor in the Psychological Sciences department, expressed her disgust with the event and encouraged people to attend Beto O’Rourke’s appearance on Oct. 11.

“Better to go see Beto at the Frazier Alumni Pavilion on Tuesday at 10am,” she said, according to the screenshots.

O’Rourke’s visit marks another stop on his state-wide college tour as he attempts to score additional support ahead of the gubernatorial election in November.

Another Facebook user commented on the post stating she would reserve a ticket but would be busy “vacuuming the lawn” or “shampooing the car.”

Richard Elliot Martin, a graduate teaching assistant at Virginia Commonwealth University, stated he received a ticket to the event despite being in Richmond, Virginia. 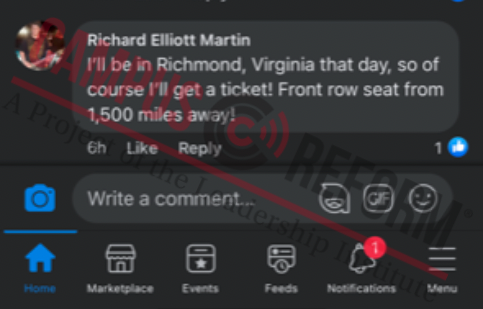 Garnder told Campus Reform that the chapter has "dealt with multiple attempts of people attempting to reserve tickets and not show up," but they plan to continue hosting events on campus.

"I hope those who attend our event can come to understand Kayleigh McEnaney's unique career experience and how important free speech is," she said, "particularly in our very divisive political climate."

McEnaney will speak about her experience serving as Press Secretary of the United States in the Trump Administration on Oct. 15 in the Student Union Building at 7pm.

Attendance is granted on a first-come basis and will be open to approximately 300 attendees.

Campus Reform contacted TTU, VCU, Garder, and the faculty for comment. This article will be updated accordingly.