Coulter attempted to speak for nearly 27 minutes before walking out of the room after protesters continued to shout and make loud noises, video obtained by Campus Reform show.

Coulter, who has been invited to speak by the Network of Enlightened Women (NeW) chapter, attempted to speak for nearly 27 minutes before walking out of the room after protesters continued to shout and make loud noises, video obtained by Campus Reform show.

In the video, Coulter walks out of the room flanked by security as protesters clap and jeer “bye Ann.” She had been scheduled to speak for an hour, as seen on Eventbrite.

Joel M. Malina, Vice President for University Relations at Cornell, told Campus Reform that the university is “disappointed” in students who shut down the event and called the hecking “rude.”

“Eight college-age individuals were removed from the auditorium following Cornell protocols,” he confirmed. “All Cornell students among the disrupters will be referred for conduct violations.”

While he claimed the university remains “committed to academic excellence,” he also expressed an apology to Coulter and attendees.

“Cornell apologizes to Ms. Coulter and all members of the audience who hoped to hear her remarks,” he said. “The inappropriate behavior displayed by disrupters does not reflect the university’s values.”

Protesters were staggered throughout the auditorium and interjected Coulter’s speech with circus music, fart noises, and tangents, the videos reveal.

As another student was escorted from the room, a third is seen on video standing in front of Coulter and blowing a whistle to drown out her speech.

An administrator issued a final warning to the audience to allow Coulter to speak and assured agitators that there was a space outside to protest. Coulter, however, repeatedly lamented against the minimal security present and walked off-site.

Two additional students were later escorted from the room, chanting “no KKK no fascist USA.”

[RELATED: Future lawyers demand 'snacks,' 'an office' for crying over a tweet]

During her speech, Coulter attested that the Law School, where the event was located, was not “one of the most impressive schools at Cornell.” She also questioned why female administrators were being sent to confront demonstrators instead of additional police.

“Don’t you have any men to do that? Why is it always girls going and talking to disruptors,” she stated.

The group also passed out flyers to recruit protesters, some of whom remained outside the venue with signs according to photos obtained by Campus Reform. It is unclear if the protesters collaborated. 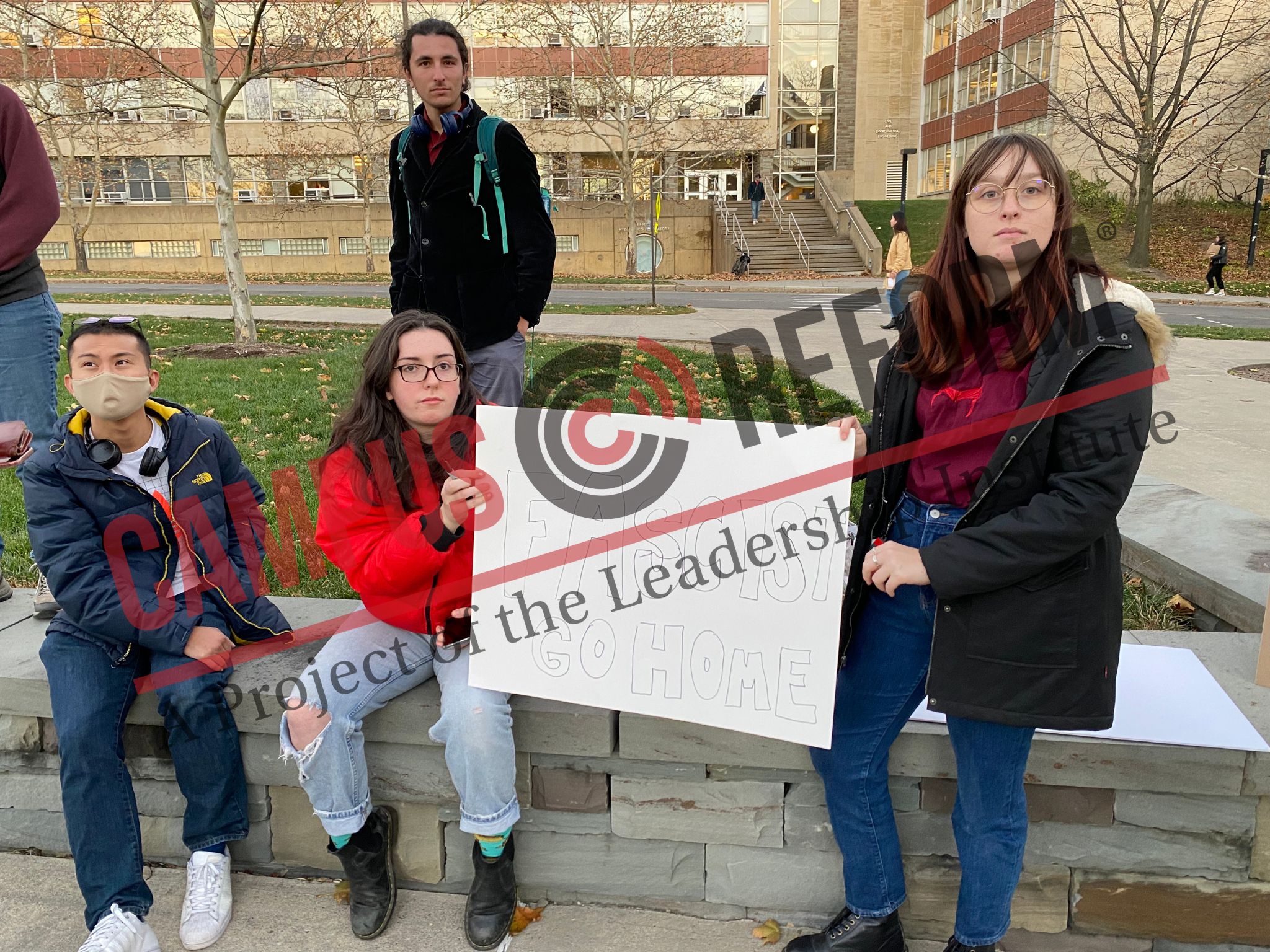 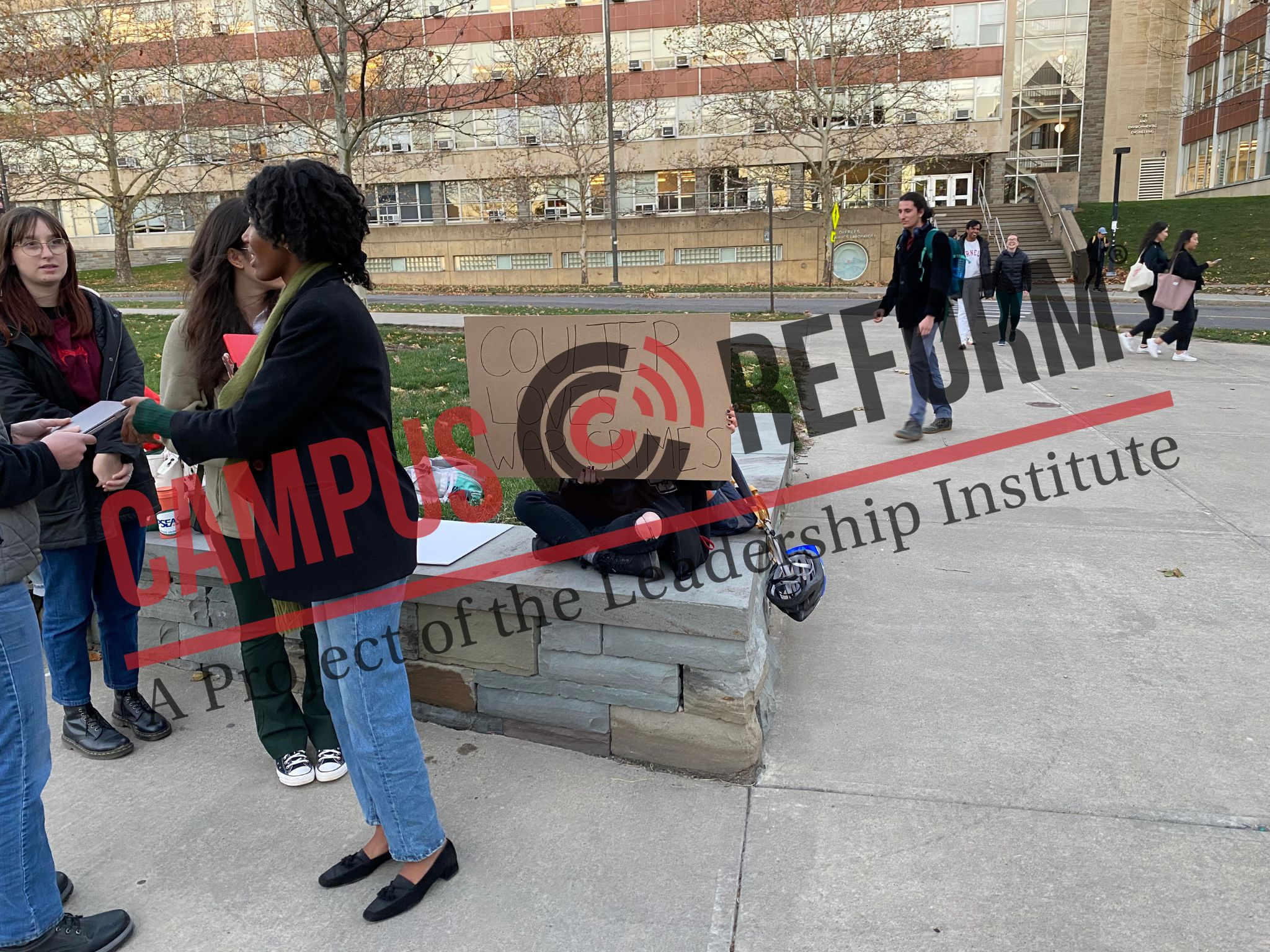 The Foundation for Individual Rights and Expression (FIRE) stated it is "concerned by the recent spike in students disrupting campus events" in a statement obtained by Campus Reform.

"To be clear, words are not violence. But disrupting events — regardless of the views espoused — is an infringement on free speech. The right to freedom of speech includes the right to listen," FIRE stated. "The students disrupting the event last night interfered with other students’ right to hear the speaker."

While FIRE applauded the university for removing the disruptive students, it asserted that "Cornell must make clear that hecklers infringing others’ right to speak and listen will not be tolerated — and that peaceful protest, or more speech, is the best way to counter opinions with which you disagree."

"Universities like Cornell that make excellent free speech promises must understand those promises mean little if they’re not put into practice," FIRE wrote.

Campus Reform contacted NeW at Cornell. The campus police department deferred to the university for comment. This article will be updated accordingly.