The staged wedding concluded with the mock marriage officiant quoting Genesis 1:28, telling the women to 'be fruitful and multiply and replenish the earth.'

The band put the skit on despite the fact that members of its own football team are members of the Church.

The halftime skit was called “gay chicken,” as reported by Jackson Payne, of the Daily Universe, the official BYU newspaper.

Featuring a mock wedding ceremony of two women, the skit mocked the words of the marriage ceremony of  the Church of Jesus Christ of Latter-day Saints, which marries a man and woman “for time and all eternity.”

The staged wedding  concluded with the mock marriage officiant quoting Genesis 1:28, telling  the women to “be fruitful and multiply and replenish the earth.” 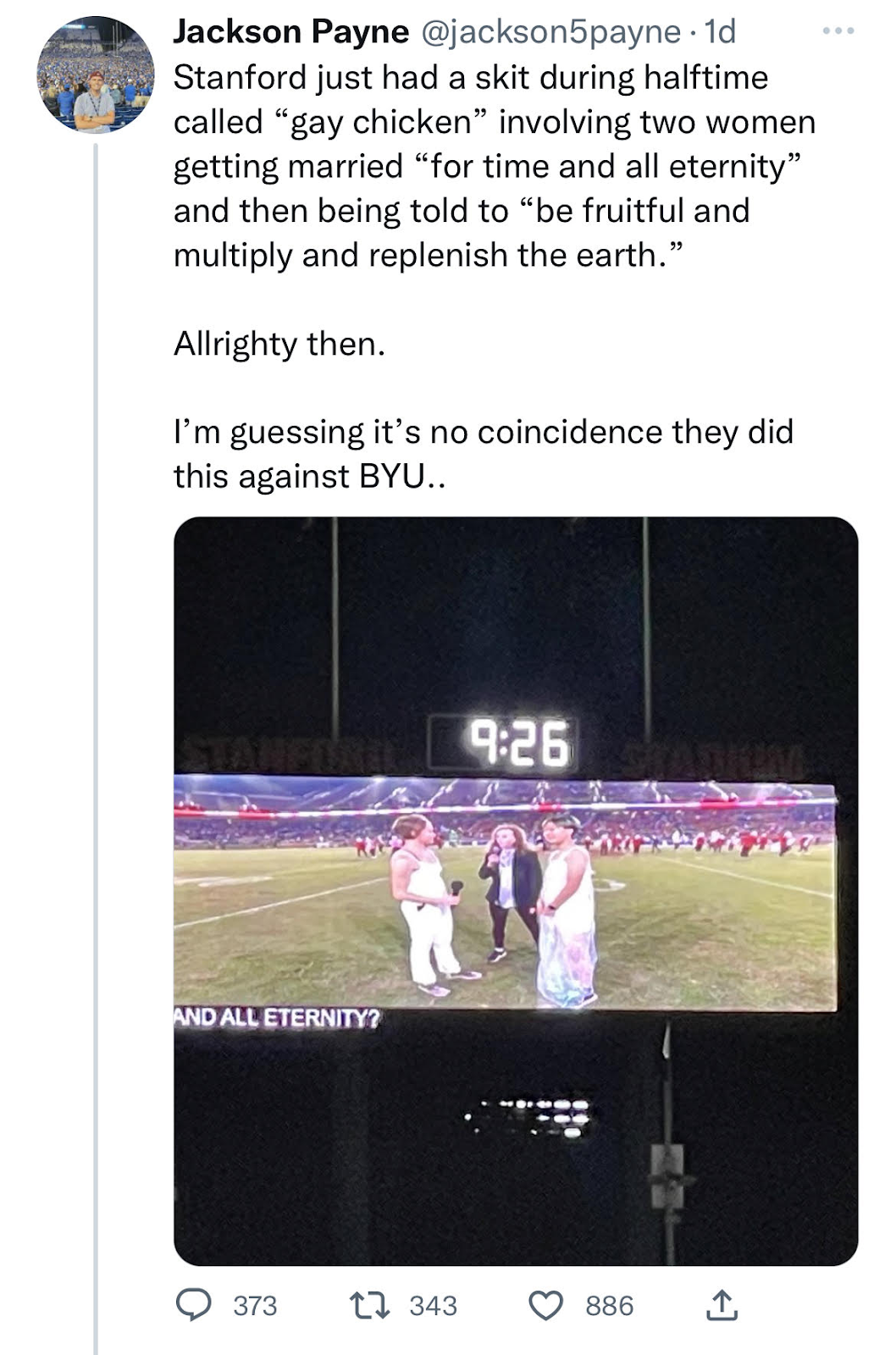 The band put the skit on despite the fact that members of its own football team are members of the Church.

Tanner McKee, Stanford's quarterback, and other players including Levani Damuni and Spencer Jorgensen have served religious missions for the Church.

Damuni was reported as saying, “I’m assuming it was the Stanford band. They’re a militia of students who don’t represent what Stanford is about. I love Stanford.”

A BYU student at the game, Lauren Palmer, when contacted by Campus Reform, corroborated the details of the skit saying, “They put on a ceremony and then kissed the bride(s). As they did so, one woman took the microphone and said something along the lines of, if you think I’m gay, well I am.”

Thomas Olsen, a reporter at the Cougar Chronicle, who covered the story told Campus Reform, “When I first heard about it, I was disappointed but not surprised.” He added that “Mocking religions as halftime entertainment is wrong, but it seems less people care because it’s BYU.”

A statement from Stanford issued the same report saying “The Leland Stanford Junior University Marching Band (LSJUMB) has a long history of lighthearted and satirical halftime performances. Unfortunately, some of the language that was used in Saturday’s halftime show did not reflect Stanford University’s values of religious freedom and diversity, inclusion and belonging.”

The statement continued saying “The LSJUMB deeply regrets that this performance caused offense to spectators, and the halftime performance review and approval process is being adjusted.”

This comes just after a statement of religious bigotry was put out regarding notes placed on a Dia de los Muertos Altar at Stanford’s campus. The notes read, “This is pure idolatry” and after that was taken off, another one was placed that said “Still idolatry ok.”

In response, Stanford’s statement reads, “Residential student leaders noticed the notes, documented, and then removed them. This is especially harmful as it was done during Dia de los Muertos, a cultural-religious tradition for many Mexicans, Mexican-Americans, and other Latiné communities. Furthermore, any form of religious bias that shows intolerance to certain rituals and practices of others is unacceptable.”

All other parties in the story have been contacted for comment. The story will be updated accordingly.

Thomas Stevenson is a senior majoring in Public Relations at Brigham Young University in Provo, Utah,. He has been married to his wife for one year. He runs an independent conservative student publication called the Cougar Chronicle.