More than 100 students participated in a “Free the Nipple” protest at University of California, San Diego this week.

Female protesters were encouraged to shed their shirts and bras to protest gender inequality and body shaming.

In an effort to fight against perceived gender inequality and body shaming, male and female students at the University of California, San Diego gathered together Wednesday afternoon—completely topless.

More than 1,000 people RSVP’d to the event via a public Facebook page for the “Free the Nipple” event. The event description touted the sit-in as a “peaceful, laid-back, and safe environment.”

“Bring your curiosity, forget your shirts, and most importantly bring your love, compassion, and support for the cause,” the event description read. “Shirts, bra, tops - optional. Show up in whatever you feel comfortable with because it should be your choice!”

Women who chose to go completely topless for the sit-in were encouraged to do so as a collective group in order to “protect the safety of the individuals,” according to another flier posted to Facebook. 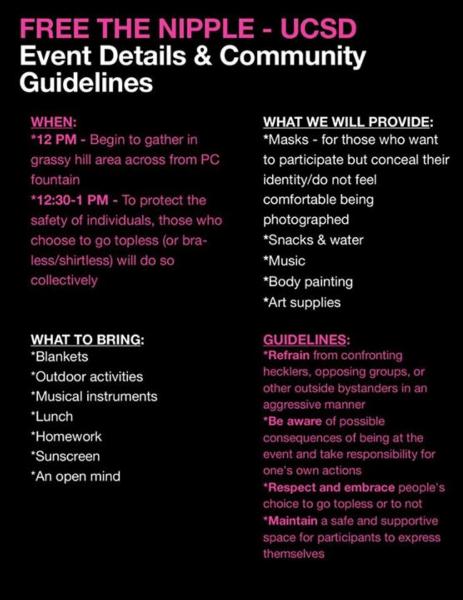 Organizers of the sit-in provided snacks, body paint, and masks for any woman who wanted to conceal her identity.

Organizers also forbade students from engaging with hecklers or “opposing groups,” according to the flier.

Aubrey Oxley, a UCSD, told the student newspaper, The Guardian, that society makes women afraid of exposing their bodies—in particular, their nipples.

Anni Ma, a UCSD alumna and organizer of the event, said in a video—which contains some nudity—that some think that women shouldn’t go topless because it could be dangerous for females or give men an opportunity to take advantage of women.

“And I’m, like, those are all, like, very valid reasons and that’s why women try to protect themselves, you know, because there are really dangerous people out in the world—it’s not cool—but then I’m like, that shouldn’t be illegal though,” Ma said. “This should be my choice to do what I want to do.”

Ma said in the video that she would her tell children who saw a topless woman, “Hey, baby girl, baby boy, those are beautiful boobs. I fed you, I nourished you with them, right? Learn to respect them and love them and the person with them.”

Ma said in the video that “a group of sorority girls” judged her for going topless in public in the cold.

“Dude, this country makes me like so confused,” Ma said. “Our society is all, like, hopped up on, like, sex on TV, sex on billboards, sex, sex, sex, sex, and then in our private life, oh, don’t do that, that’s disgusting.”

ABC reported that more than 100 people attended the event, but not every student on the Facebook event page seemed happy with the turnout.

“I felt the event was underwhelming,” UCSD student John Tucker wrote on the Facebook event page. “There were a lot of males who were there ‘supporting’ the event and by supporting I mean taking pictures and gawking. It kind of contradicts what the event is about. The ratio of males to females was strange. Not that there is anything wrong with that, but I feel a good portion were there to see their first pair of breasts in real life. Also, I do not understand why some females who were supporting the event, were topless but covered their nipples. Seemed contradictory for me.”

Marcia Garcia Cherán, the president of the Active Minds student group at UCSD, posted that several members of the Free the Nipples protests were “inappropriate and disrespectful” to both her and the group’s mental health fair.

Graham Richardson, whose Facebook page says he lives in San Diego, complimented the “incredibly brave” women at the event, including Ma, but said that he “was so busy with #freethenipple [he] forgot to “sunscreentheback.”

Earlier this month, ABC reported that a visual arts professor required his students to take their final exam nude.

Kaitlyn Schallhorn previously, was a reporter for Fox News, Editor in Chief of the Missouri Times, and a news reporter for the Santa Barbara News-Press. She is currently the City Editor at Orange County Register. Kaitlyn was also a Campus Correspondent with Campus Reform.