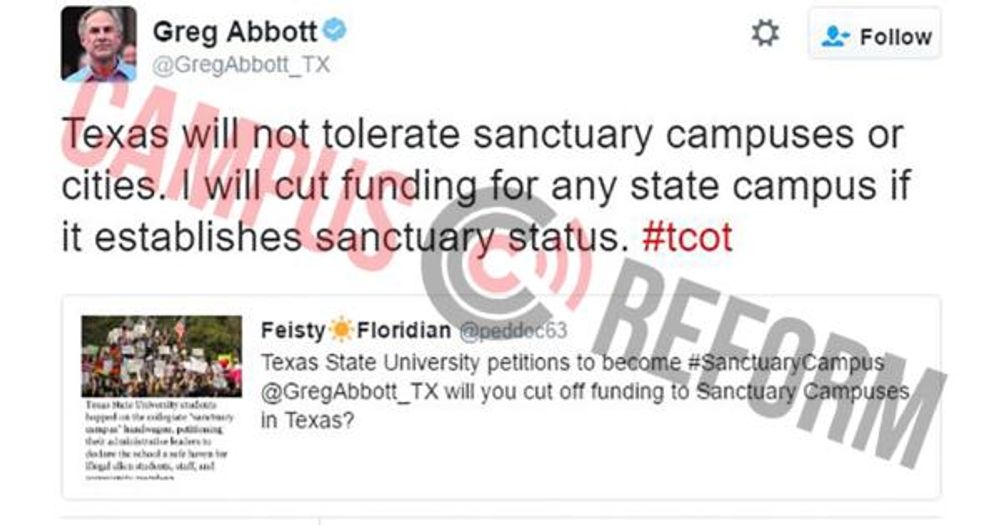 Texas Governor Greg Abbott has no sympathy for the sanctuary campus movement, declaring his intention to cut funding for any state school that attempts to make itself a sanctuary for illegal immigrants.

In a series of tweets posted on the Republican governor’s account, Abbott assured concerned constituents that “Texas will not tolerate sanctuary campuses or cities,” vowing multiple times that he will cut funding for any state entity that attempts such a plot, which the City of Austin and the University of Texas system have pledged to do.

In fact, Abbot even claimed that he has “already issued an order cutting funding to sanctuary cities,” assuring his constituents that he will “sign a law that bans sanctuary cities.”

“Follow the law in Texas. No sanctuary cities. Period,” he added, later appearing on Fox News to defend his stance on the issue.

Abbot again claimed that he has already started a process of withholding funds from sanctuary cities, explaining that he is hopeful the state Senate will “pass a law banning sanctuary cities in the state of Texas” during the upcoming legislative session.

“The consequences will be so extreme for the cities and the counties that they will have to follow the law,” he added. “Listen, all we’re asking them to do is to follow and apply the federal law of the United States of America.”

Thus far, more than ten universities in Texas have pledged to offer sanctuary to students who migrated to the country illegally, including the entire University of Texas system, which would put the school’s funding in jeopardy under Abbott’s proposed sanctions.