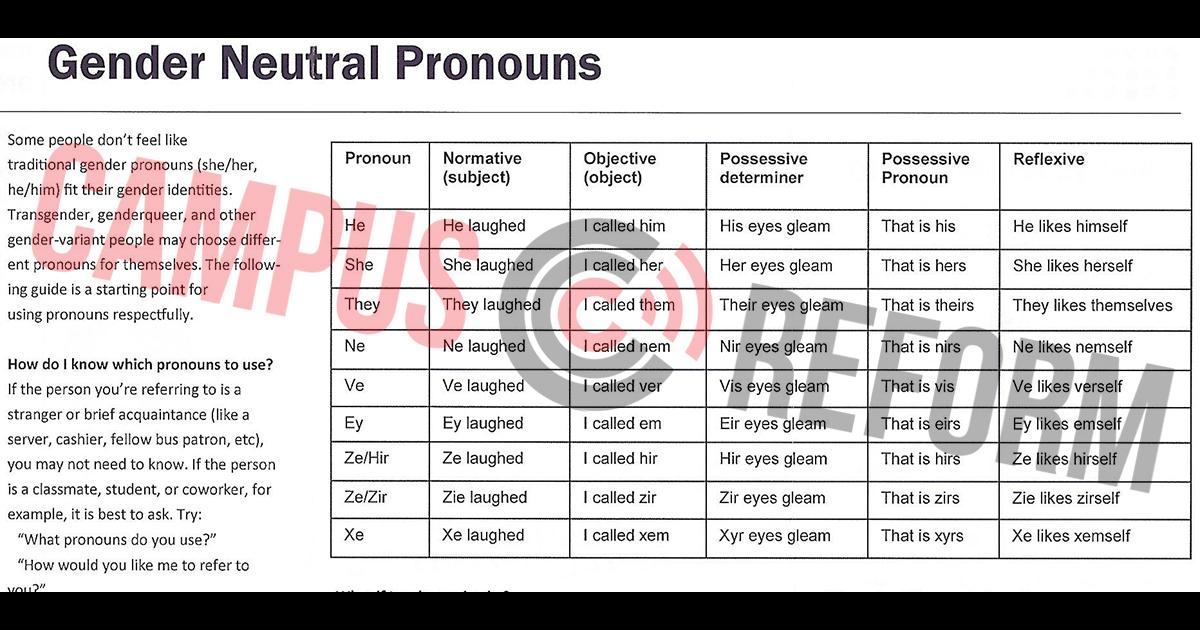 The “Gender Neutral Pronouns” pamphlet, a copy of which was obtained by Campus Reform, tells students that “some people don’t feel like traditional gender pronouns fit their gender identities,” and thus lists alternatives that students can use instead.

"Why is this university entertaining something as useless as this?"

These pronouns are accompanied by a conjugation chart listing how they might be used as a subject, object, possessive, possessive pronoun, and reflexive. For example, to refer to a student who identifies as “ne,” one could say “Ne laughed” or “That is nirs.”

To refer to a student who identifies as “ve,” the pamphlet explains that one would say “Vis eyes gleam” or “I called ver.”

The pamphlet—which lists seven different types of gender neutral pronouns—encourages students to ask their friends, classmates, and coworkers how they identitify before making any assumptions.

The guide does warn, however, that students “may change their pronouns without changing their name, appearance, or gender identity,” and suggests that preferred pronouns be re-confirmed regularly during “check-ins at meetings or in class.”

“It can be tough to remember pronouns at first,” the guide notes. “Correct pronoun use is an easy step toward showing respect for people of every gender.”

The guide was first discovered by Francis Hayes, a freshman studying computer science at Kennesaw State, who told Campus Reform that the pamphlet was distributed Tuesday by administrators in the school’s Student Center.

"It is a disgrace, because I thought that my school was one of the few schools left that weren't teaching these things. But when I found this, I felt really disappointed,” he told Campus Reform. “Why is this university entertaining something as useless as this?"

Hayes also criticized the pamphlet for potentially confusing impressionable students, claiming that Kennesaw State is “in the early stages of Cultural Marxification.”

“The guide will confuse students regarding what gender they are,” he speculated, adding that “none of those pronouns exist in the English language, so it's pretty much ridiculous that they're trying to teach this."

Kennesaw State media officer Tammy Demel acknowledged a request for comment from Campus Reform, but did not respond in time for publication.