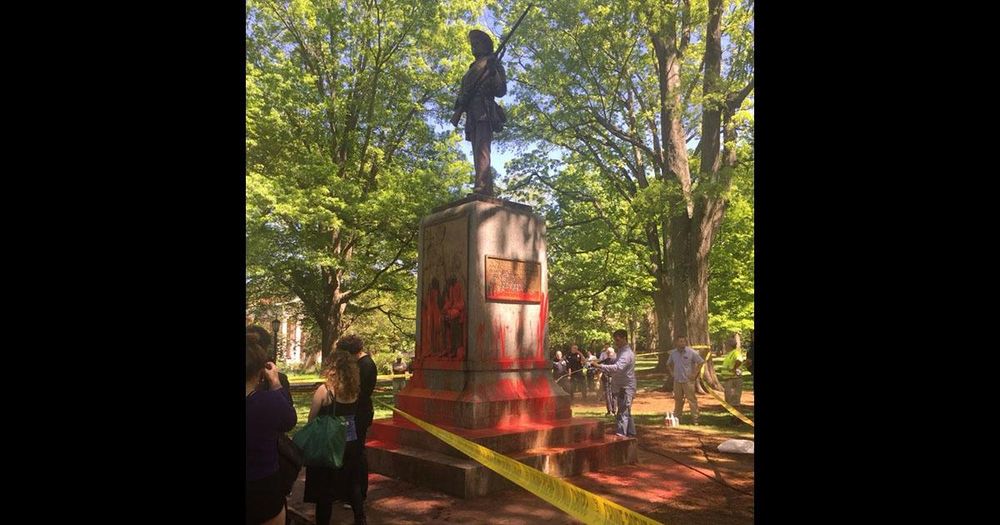 A student activist at the University of North Carolina at Chapel Hill has defaced a controversial statue of a Confederate soldier by dousing it with a mixture of blood and red ink.

According to Move Silent Sam, an activist organization that is attempting to remove the monument, graduate student Maya Little was arrested for vandalism by local authorities after covering the statue with the red solution.

“Maya Little was arrested for defacing @UNC’s racist Confederate monument,” the group tweeted on Monday. “We support her, and encourage others to do the same.”

“[University President] Margaret Spellings, Chairperson Bissette, and the entire @UNC_System administration have failed to stand up for people of color at UNC. Shame!” the organization added.

After Little doused the monument with the concoction, a group of several students linked arms in an effort to prevent officials from cleaning the area. "Hey hey, ho ho, this racist statue has got to go," the students chanted, according to a video tweeted by The Daily Tar Heel.

The Union Workers at UNC issued a statement on Facebook saying that it “urges the University administration to take responsibility for the continued presence of the statue on campus and the danger it poses to students and workers.”

As previously reported by Campus Reform, UNC students pledged to protest the statue last year, boycotting several businesses on campus, including a Starbucks, a Wendy’s, Student Stores, a snack stand, a bagel shop, and even the main dining hall.

In a prepared statement to the Daily Tar Heel, Little said it is “our duty to continue the struggle against white supremacy that countless others have led since black students have been on this campus.”

“Today I have thrown my blood and red ink on this statue as a part of the continued mission to provide the context that the Chancellor [Carol Folt] refuses to,” she continued. “Chancellor Folt, if you refuse to remove the statue, then we will continue to contextualize it. Silent Sam is violence; Silent Sam is the genocide of black people; Silent Sam is antithetical to our right to exist. You should see him the way that we do, at the forefront of our campus covered in our blood.”

In a statement to Campus Reform, Randy Young, a Media Relations official at UNC, confirmed that “shortly after 2 p.m. [on April 30], a woman from among a small group in McCorkle Place poured red paint on the Confederate Monument.

“A UNC Police officer took the individual, who was charged with vandalism, into custody,” Young elaborated, adding that “UNC Facilities Services removed the paint from the monument.”