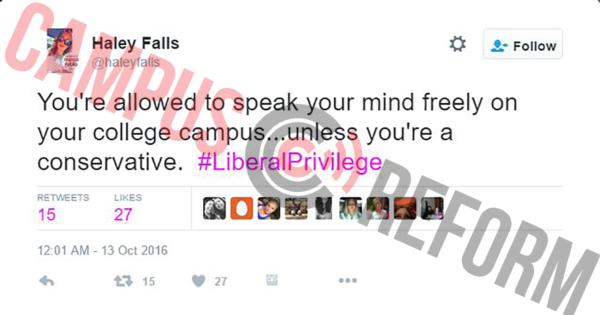 Last week, conservative college students across the country tweeted about #LiberalPrivilege, a hashtag created by the Leadership Institute’s Campus Reform to highlight the bias against conservatives on college campuses.

#LiberalPrivilege was tweeted by over 66,000 users and appeared on 6.4 million timelines, demonstrating the mass frustration among conservative students who feel like outsiders at their universities.

“Being able to say anything and not listen to the other side by calling them names...#LiberalPrivilege.”

Many of the tweets addressed administrative bias and censorship, vilification from peers, and indoctrination efforts by professors.

Haley Falls, a Fairfield University student, tweeted about censorship of conservatives, alleging that “you're allowed to speak your mind freely on your college campus...unless you're a conservative. #LiberalPrivilege”

Will Nardi, a Campus Reform correspondent and student at Roger Williams University, wrote that “#liberalprivilege is when you get to hear only what you want to hear,” alluding to the uptick in safe spaces on college campuses, which often arise in response to conservative events. 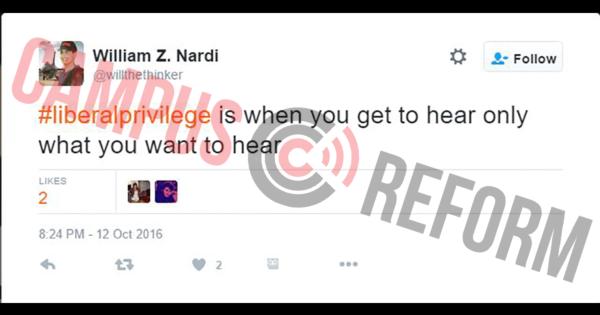 In addition to the massive reach on Twitter, field representatives from the Leadership Institute took to campus to ask students for other examples of #LiberalPrivilege, compiling a video of students displaying their responses on whiteboards.

Several students in the video wrote about being labeled racist for expressing conservative views, or being punished in the gradebook by liberal professors.

“Being able to say anything and not listen to the other side by calling them names like racist, sexist, xenophobe, etc. #LiberalPrivilege,” one student wrote.

While conservatives continued to use the hashtag to point out bias on and off campus, several tweeters noticed that #LiberalPrivilege appeared to be censored by Twitter.

The hashtag was trending nationwide, but declined to show up on many users’ feeds, while others who tried to use the hashtag were autocorrected to use a misspelled version, “#LiberalPrivilage.”

Despite the suspicious pitfalls, the #LiberalPrivilege campaign was a resounding success and was covered by USA Today and mtvU.

If you or a friend have an example of liberal privilege on your campus, tweet with the hashtag #LiberalPrivilege or send your story to liberalprivilege@campusreform.org.