Anti-cop prof to give keynote at ECU MLK Celebration 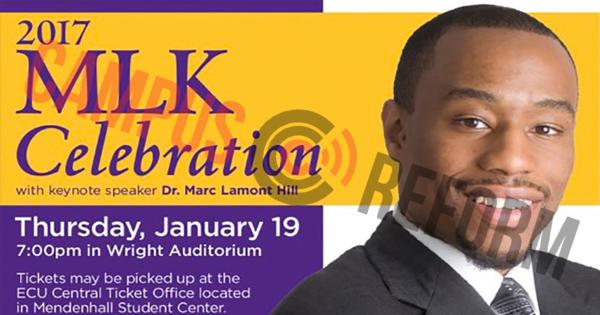 East Carolina University will be hosting an anti-police propagandist as keynote speaker at its 2017 MLK Celebration.

Dr. Marc Lamont Hill, who is known for his heavy criticisms of the police force and support of the Black Lives Matter movement, will be speaking at ECU on January 19 at an event presented by the Office of Equity and Diversity, the Ledonia Wright Cultural Center, the Student Activities Board, and other campus organizations.

“Hill's...words clearly illustrate that he does not respect the rule of law and the value of police officers.”

Hill is well known for his controversial comments relating to different issues, such as defending the actions of convicted cop-killers Assata Shakur and Lovelle Mixon, calling them "freedom fighters" and saying that "they are responding to what they see as a repressive and oppressive police state; That's what they are challenging. And we need to respect that and listen.”

Hill also lied on national television in 2014 when he claimed that an unarmed African American was killed by police every 28 hours, a statistic that was rated as false by both Politifact and The Washington Post.

Later, in 2015, Hill stated that the police serve as “an occupying force in the hood,”and said that the Baltimore riots were not actually riots, but rather “uprisings” against “police terrorism.”

Dr. Tracy Tuten, a professor at ECU’s College of Business as well as an alum, told Campus Reform that she was deeply disturbed by Hill’s invitation to speak at the school.

“Marc Lamont Hill's actions and words clearly illustrate that he does not respect the rule of law and the value of police officers to protect and serve society,” Tuten said. “Further, he is not above blatant lies to advance his cause.”

“I am very concerned. In my view, to invite someone who is known to espouse such beliefs is to suggest that ECU supports those beliefs,” she continued. “Marc Lamont Hill could inspire people to use violence and hate rather than discourse and respect.”

Campus Reform also reached out to ECU for comment on Hill’s address, but did not receive a response in time for publication.