Clemson set to roll out mandatory diversity course this fall 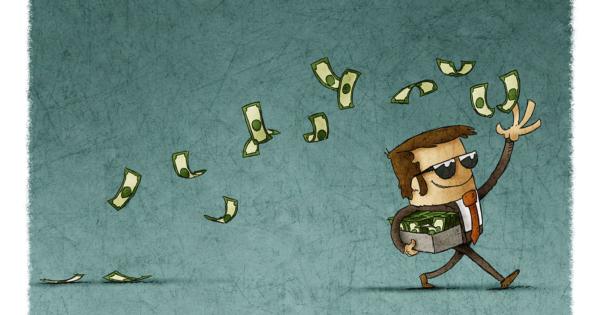 Hot on the heels of the news that Clemson University is spending more than $25,000 on “diversity education” for faculty members, administrators have revealed a mandatory diversity course for new students.

Chief Diversity Officer Lee Gill made the announcement in an email to students addressing the “efforts to create an even more welcoming and inclusive environment” promised by President James Clements.

“If Clemson claims to be an institution of higher learning, it should not be indoctrinating students.”

[RELATED: Clemson begs profs to sign up for $27,000 diversity training]

“The university is also providing additional staff training and course instruction for students regarding diversity and inclusion,” Gill informed students, stating, “I encourage you to read our full update on the university’s Diversity and Inclusion web page.”

Clements had originally announced in an April 2016 blog post that “the CU1000 course is being restructured to improve students’ understanding of their responsibility as members of a diverse community,” and Gill’s link to Clemson’s “Inclusion Update” for April 2017 indicates that “work is ongoing and remains on schedule” for implementation in the fall semester. 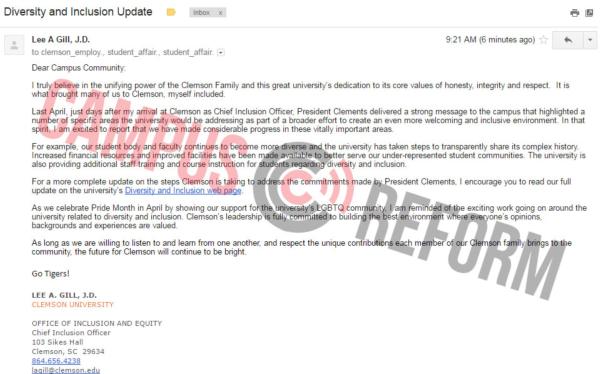 Dr. Sue Whorton, the CU 1000 Course Coordinator, responded to Campus Reform’s inquiries by stating, “I believe Mr. Lee Gill, Special Assistant to the President for Inclusive Excellence, is planning to create a student module similar to the one created for faculty and staff.”

“CU 1000 is a zero-credit, pass/no pass course that all new Clemson students are required to complete during their first semester of enrollment,” Clemson explains on its website. “The purpose of CU 1000 is to introduce new students to Clemson’s student success resources and community standards and values.”

Clemson freshman complete some of the course modules online and others in person, with the ultimate goal of understanding “Clemson’s community standards, policies, and expectations,” as well as their own “social identity and values as well as those of others.”

Students who “forget” to register for CU 1000 are automatically added to the course at the beginning of the term, the site adds.

“College marks a time for an exploration of one’s values,” he argued. “If Clemson claims to be an institution of higher learning, it should not be indoctrinating students.”

In addition to the new diversity course, the Inclusion Update contains a commitment to “double the number of underrepresented faculty by 2025,” and also notes that “during the current academic year, The Office of Student Affairs has funded more than $116,000 in inclusion-related programming across the campus.”

Clemson student and Air Force veteran Ryan Nielson questioned whether the “inclusion-related programming” is a good use of student tuition dollars.

“I think the amount of money spent on diversity related causes is not in step with the needs of the students,” he told Campus Reform. “No wonder tuition outpaces inflation.”

Others critiqued Chief Diversity Officer Gill’s $185,850 per year salary, such as Abir Mandal, a PhD candidate in Economics.

“The Chief Diversity Officer makes more than many of our professors who actually studied something valuable,” Mandal observed. “Now there seems to be an option to contribute to the tree of victimology and earn an above market premium.”

UPDATE: Clemson is contending that "inaccurate claims have been made about the content and intent of both a recently released online training program for employees and CU 1000," the required non-credit course for first-semester students.

First, the school insists that a scenario in the faculty training module was not intended to "suggest that it was appropriate to be late for workplace meetings" when it cautioned participants to be understanding that "the concept of time is viewed differently in different cultures and countries," but did not elaborate on the distinction.

The school also insists that "there is no online diversity training planned for students and no substantive changes are planned for CU 1000 at this time," contradicting Whorton's statement.