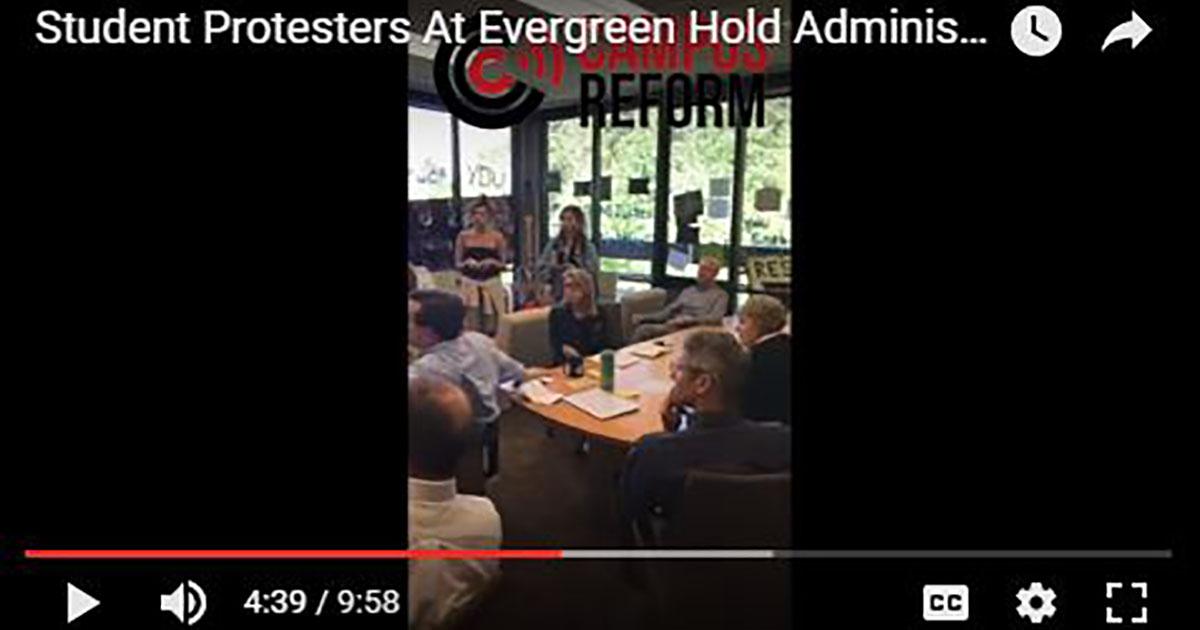 Video from inside Evergreen State College continues to leak, showing that protesters had at one point held administrators hostage until they agreed to comply with their demands.

The incident took place during the second day of demonstrations demanding the resignation of Professor Bret Weinstein, who angered many students when he challenged the school’s decision to ask white people to leave campus for a day of diversity programming in an all-staff email.

"Somebody needs to go in that room real quick to make sure there’s no way for them to leave."

Having already accosted Weinstein with such vitriol that campus police suggested he leave campus because officers could not guarantee his safety, the students set their sights on the administration, confining school officials in an office until they capitulated to an ultimatum demanding various diversity-related initiatives.

“The priority is that they stay in that room. If they aren’t in that room, then we did something wrong, so you all need to watch that door, watch all the doors, the windows, you need to keep eyes on them,” one protester commands, referencing all of the potential exit points that administrators could use to make an escape. “Somebody needs to go in that room real quick to make sure there’s no way for them to leave.”

The video pans to a closed conference room leading to College President George Bridges’ office, which is surrounded on the outside by dozens of student protesters who made it their stated mission to establish a “physical presence” outside the office to ensure that Bridges and his staff “aren’t leaving.”

Shortly thereafter, one demonstrator emerges from Bridges’ office and triumphantly informs her companions that Bridges “talked to the chief of police and he said police will not show up.”

The unidentified protester who was apparently leading the brigade then enters Bridges’ office, where the president and several other administrators are seated around a table that is encircled by still more student protesters.

“The only priority is that y’all stay in this space until those demands can happen so that’s the only thing that we’re concerned about,” the protest leader reiterates, though he assures the administrators that “everyone’s safety and health is concerned,” and that food and water would be provided to them.

At one point, Bridges explains that he needs “to pee,” to which one protester initially responds by sharply instructing him to “hold it,” though he was eventually escorted to a nearby bathroom by a team of protesters.

Meanwhile, the crowd gathered outside continued to chant “hey, hey/ho, ho/these racist faculty have got to go.”

Some faculty members have enthusiastically aligned themselves with the demonstrators, however, encouraging their extreme tactics and endorsing their demands, which include suspending Weinstein without pay, disarming the campus police department, creating a staff position to support illegal immigrant students, and implementing mandatory “sensitivity and cultural competency training” for all employees.

One professor, Peter Bohmer, published an open letter expressing “solidarity” with the student protesters, writing that “the winning of these demands would lead to a far more inclusive and just campus,” but noting that “only one of the twelve demands mentions Bret Weinstein” because “this movement is about far more than Bret Weinstein.”

The demands do, in fact, seem to be the culmination of prior incidents in which student activists were sanctioned for interrupting school events, including a convocation, the opening of a new residence hall, and a reception for the school’s new chief of police, according to The Cooper Point Journal.

Bohmer, though, goes on to devote significant attention to the Weinstein controversy, accusing his colleague of emboldening “white supremacists” by appearing on Fox News to share his perspective with Tucker Carlson.

Bohmer complains that Weinstein “did not challenge the misinformation put forward by Carlson, e.g., that whites were forced to leave campus during the ‘Day of Absence’ in April of this year,” asserting that, “in reality, 200 white students were asked to volunteer, not forced, to leave campus for this discussion, a minor departure from previous years where students, staff, and faculty of color had left campus for one day.”

He also objects to Weinstein’s characterization of the ensuing protest, insisting that Weinstein was never “blocked from leaving his classroom” and that his contention that “a mob was running the campus” was “totally false” and “irresponsible.”

“Occasionally, the word safety is overused at Evergreen but an interview such as Weinstein’s on Fox contributes to a climate where the growing numbers of emboldened white supremacists pose a growing and real danger, especially to Black students, staff, and faculty,” Bohmer writes. “To do such an interview which furthers the right-wing agenda of Fox and also societal racism is the height of racial insensitivity.”

Campus Reform reached out to the university for comment, but did not receive a response in time for publication. As this article went to press, however, the school announced on its website that "the college is closing immediately for the day" due to "a direct threat to campus safety."