Activists use Trump pic to make case against business major 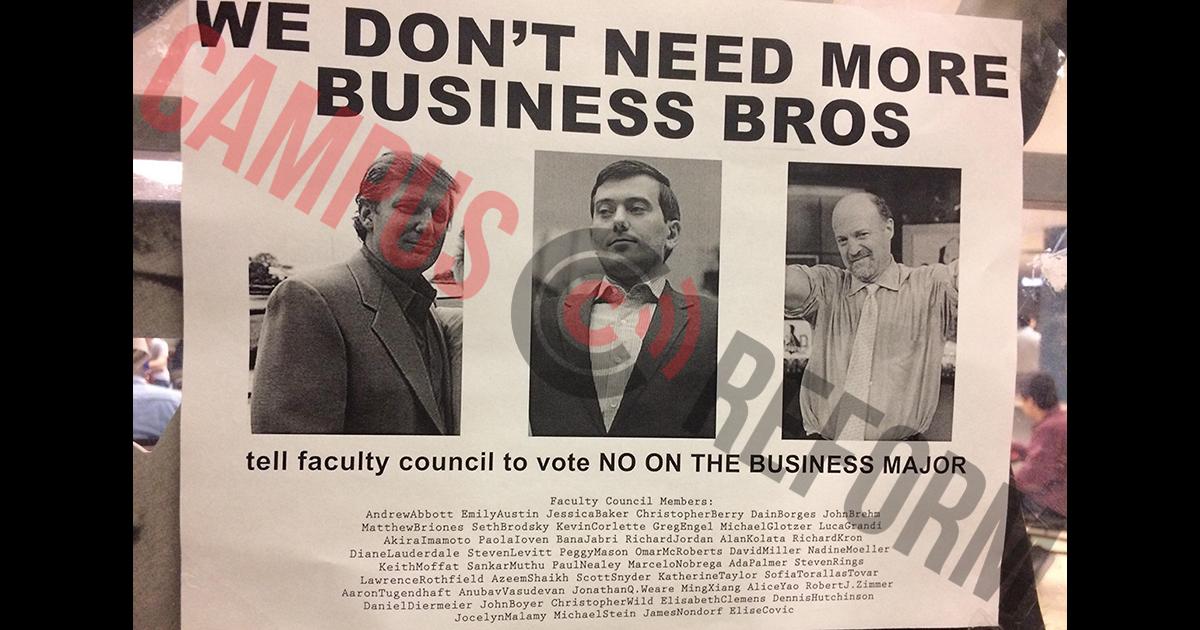 A new activist campaign at the University of Chicago is using images of three “business bros,” including President Trump, to make a case against a Business Economics major on campus.

According to images obtained by Campus Reform, one of several posters said to be widely distributed throughout the school argues that “we don’t need more business bros,” and includes three large images of Trump, a business television personality James Cramer, and convicted businessman Martin Shkreli.

"The introduction of a pre-professional business major would attract applicants who view their education primarily as a preparation for lucrative careers."

Underneath the pictures, the flyer urges students to “tell faculty council to vote no on the business major,” listing the names of each council member.

The controversy over the proposed major first made headlines in mid-February, when the faculty’s College Council was originally slated to vote on the proposition designed by the Department of Economics and the Booth School of Business. According to The Chicago Maroon, the major was designed to be “controlled equally” by both university departments.

The idea was opposed by dozens of professors and students, who signed a letter arguing that “the creation of a business major would call into question the University’s commitment to the liberal arts.”

“Whereas the University of Chicago has traditionally sought to cultivate an intellectually robust and diverse student body by seeking out creative and unconventional thinkers, the introduction of a pre-professional business major would attract applicants who view their education primarily as a preparation for lucrative careers,” the letter stated.

“As college educators, we believe that the best preparation for professional success consists not in programs whose sole purpose is to simulate the world of finance, but in teaching that refines students’ capacities to analyze logical arguments and complex information, and that cultivates in them a broad ability to read, write, speak, listen, and think independently,” the document added.

While the petition does not specifically mention President Trump or any other business celebrity, the posters featuring Trump, Shkreli, and Cramer began to appear on campus around the same time as the letter.

According to The Maroon, however, the College Council faculty members had to postpone the vote on the major until April 10 after deadlocking on a decision during a closed-door meeting on February 13.

"This delay will give us time to better understand what's at stake," one College Council member told the publication at the time.

Spokespersons for the University of Chicago did not immediately respond to Campus Reform’s request for comment.