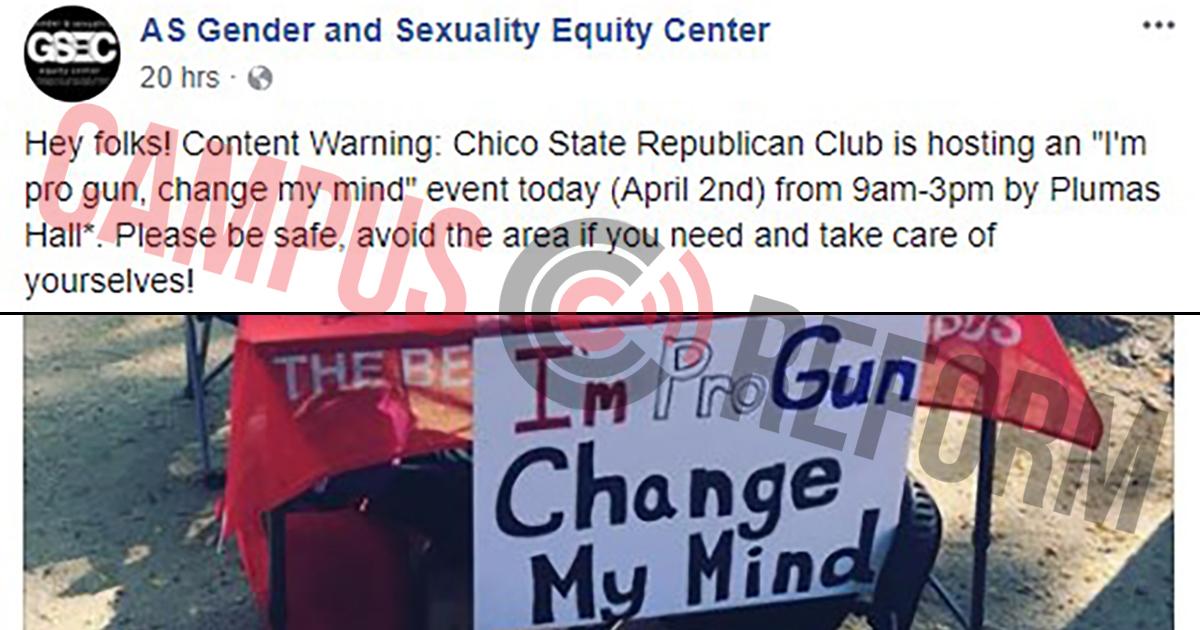 A student-run group at California State University, Chico warned classmates to “be safe” and “avoid the area” Monday when a conservative student group held a pro-gun event on campus.

The Gender and Sexuality Equity Center (GSEC), a student-run organization sponsored by student government, took to social media on Monday, issuing a “content warning” to alert students that the Chico State Republicans were broadcasting their support for the Second Amendment and inviting passersby to engage in discussions about the topic.

"If people cannot handle a fair and open-minded debate they do not have to participate, and the Chico College Republicans would never force someone to."

According to its Facebook page, the center is “a student-run activist organization” that “challenges societal norms that have been used to oppress and marginalize by providing opportunities for leadership, personal development, and referral services.”

“We offer a safe and inclusive space where the campus and community can effectively support the academic mission of the university,” the center explains, noting that it opened in 2011 “as an expansion of the Women's Center in an effort to further promote human rights and the equal representation of marginalized students on Chico State's campus.”

The group further specifies that the Women’s Center has existed for more than four decades due to “ financial help from a memorial fund, and the support of the Associated Students.”

When confronted by one Facebook user who found it “disappointing” the the group was “putting down another campus club who are simply expressing their views,” the GSEC defended its content warning, arguing that the social media post was not intended to “put down” another student group.

“We hear you and don't wish to put down another campus organization wishing to have a civil conversation,” the center wrote in the comment section. “We are merely giving a warning to those who may wish to avoid the area entirely!”

In an email to Campus Reform, the Chico State Republicans chapter explained that it is confused why “anyone would need to put out a warning for an open discussion,” but conceded that the GSEC “has their First Amendment right to warn their followers of whatever they want to.”

“The actions taken by the leaders of GSEC are similar to the reasons we wanted to hold our event,” the club stressed. “Politics has become more and more decisive over the past few years and we believe events like our ‘I’m Pro Gun Change My Mind’ will help people participate in a political debate while remaining civil and [open-minded].

“If people cannot handle a fair and open-minded debate they do not have to participate, and the Chico College Republicans would never force someone to,” the group added.

The GSEC did not immediately respond to Campus Reform’s request for comment.