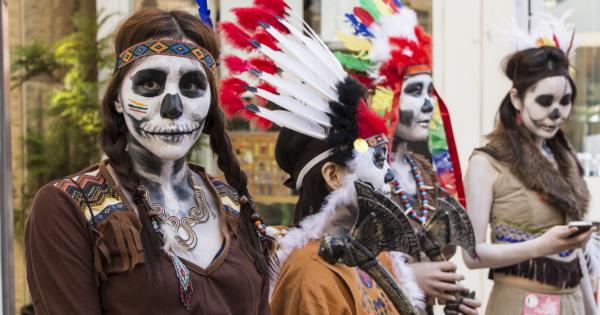 Students at the University of Minnesota (U of M) received an email last week encouraging them to be respectful in their Halloween costume choices and not wear any costume that could offend people.

“Please keep in mind that certain Halloween costumes inappropriately perpetuate racial, cultural, and gender stereotypes,” U of M Vice Provost Danita Young Brown and Vice President for Equity and Diversity Katrice A. Albert said in the email obtained by Campus Reform. “Although it may not be the intent, these costumes, and choosing to wear them, can depict identities in ways that are offensive or hurtful to others.”

The email, sent Wednesday, also warned of “social media posts” that could have a “long-term impact on [students’] reputations." It also reminded students of the school’s “ campus climate” policy. 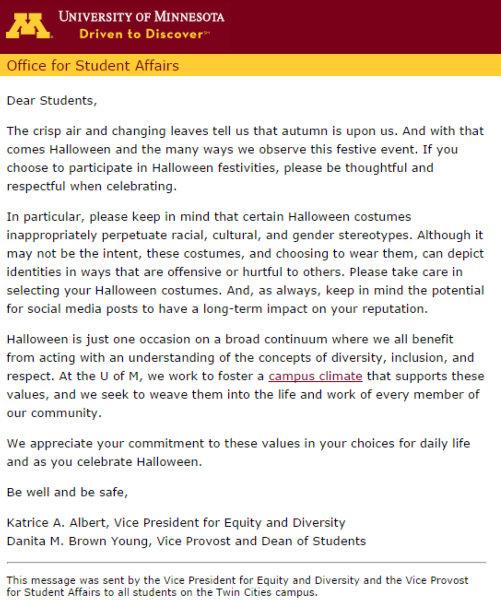 “I think there are a lot of people on campus, and to worry about each individual and how you dress is probably a little over the line,” Jeff Westerhaus, a U of M student, told Campus Reform.

Elizabeth Cortez, a human and industrial relations major at U of M, told Campus Reform that she wasn’t bothered by the email as it was written as more of a guideline and didn’t include any consequences. However, she said it is up to the discretion of an individual wearing the costume if they want to wear something controversial or not.

Cortez said she is half-Mexican and personally does not get offended by certain Halloween costumes, but people do need to be aware that others might.

“If I see somebody with a sombrero, or whatever, it’s fine they’re having fun. I don’t take it personally, however some people do,” she said.

Cathryn Collins, a senior studying journalism at the university, said that offensiveness is a fine line.

“There’s not a book written about what’s offensive and what’s not,” Collins told Campus Reform.

She said even sending out the email suggesting not to be offensive could offend someone.

“It’s kind of like an unending circle,” she said.

Both Cortez and Collins said that the university is not doing anything wrong right now because it is only giving suggestions, but if it started to enforce the suggestions then that would be crossing the line.

“At the end of the day it’s not up to the university to tell us what we can and cannot do,” Cortez said.

University of North Dakota officials sent out a similar memo to students last week after national backlash stemming from students who wore “ Siouxper Drunk” shirts at an end-of-the-year festival.