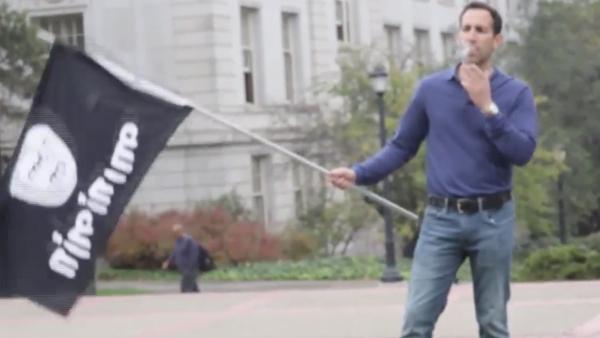 Students at the University of California, Berkeley (UCB) are infuriated by an Israeli flag but not by a flag representing the terrorist organization, ISIS according to a new video posted to YouTube.

Ami Horowitz, a satirical video producer for Fox News, headed to the UCB campus to film how student’s reacted when he waved an ISIS flag, compared to when he waved the flag of Israel.

“ISIS is misunderstood. We just want our own state,” Horowitz can be seen yelling in the video. “Why does America keep bombing us?”

No one says anything, until one point in the video, Horowitz begins smoking a cigarette while still waving the ISIS flag. A student graciously comes up and alerts Horowitz that he can’t smoke on campus. Nothing was said about the flag in his hand.

However, when Horowitz begins waving the Israeli flag, students didn’t hesitate to speak up.

“Israel is a thief in the night,” says one student, “F**k Israel,” yells another.

“Students at Berkeley clearly have a lot of intellect; it is one of the most prestigious and selective universities in the country,” Horowitz wrote in response to his experience. “But do they have wisdom? I went to the bucolic campus armed with a flag that represents the greatest evil known today, ISIS. If these are our best and brightest then we should all be afraid, very afraid.”