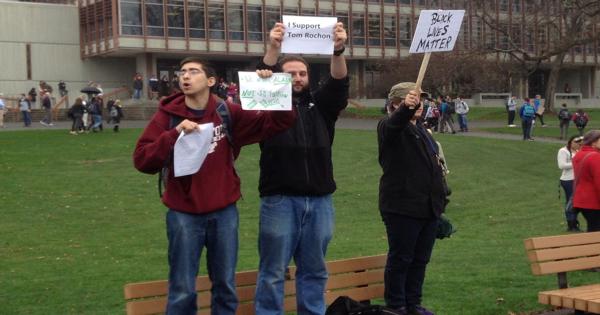 Ithaca College students protesting alleged racism Wednesday were shocked and offended when one student showed up holding a sign supporting the embattled president.

“I support Tom Rochon,” read the sign carried by a solitary student, who was seemingly unintimidated by the fact that he was alone in a sea of contrary opinions, as evidenced in a series of videos obtained by Campus Reform.

“These are the type of people who are making our community unsafe and unlivable.”

The counter-protester makes his first appearance standing on a bench between two other demonstrators, one holding a sign proclaiming “Black Lives Matter,” and the other raising a placard with the slogan “#POCatIC.”

Initially, one male protester attempted to defend the Rochon supporter, saying, “This guy has the right to have his voice heard just like everybody here.” Bystanders apparently disagreed, shouting various slogans and forcing the free speech advocate to retreat.

Other protesters then began to gather in front of the counter-protester, at which point he moved to an adjacent bench, where his sign would be more visible.

The demonstrators followed him, however, and attempted to obscure his small sign with a much larger banner carried by three students.

The third video, which is also the longest, reveals that the students were eventually able to calm themselves down enough to at least attempt to engage the counter-protester in a dialogue, though their excitement periodically bubbles over into hysterics.

“Do you empathize with us?” another woman asks.

“I empathize with a lot of things, and I like that there is a political conversation,” the counter-protester responds before being cut off by accusatory questions suggesting that he credits himself for starting the conversation.

“When people don’t engage with the other side; when people are sitting quietly and don’t do anything, then there’s a problem,” the Rochon supporter explains. “That’s the position that I have. The other side has been quiet.”

“The other side has been quiet?” a black male student interjects incredulously. “How is that, when the other side owns institutions and organizations, and they don’t even have to put their voice for it?”

“But no one has come out to support Rochon,” the counter-protester responds matter-of-factly.

“No one has come to support Rochon because he’s doing a fucking shitty job,” the student counters, adding, “Nobody gives a shit” when the Rochon supporter meekly disputes the negative assessment of the president’s job performance.

“I didn’t say anything like that,” the counter-protester says. “Why would you think that?”

“There must be a reason why you want him still in there,” the student insists, his tone indicating that he cannot think of any reason other than underlying racist sentiments.

The counter-protester subsequently asserts that President Rochon has been in the position for nine years, during which time he has “been a great president and supported Ithaca College,” notably through fundraising efforts. He also observes that those calling for his resignation have offered relatively little in the way of specific complaints, which naturally did not please the protesters.

“What about emotional support to the folks of color who are experiencing marginalization on campus every single day?” one female student asks, implying that Rochon has not offered the degree of rhetorical support minority students would like from the administration. “What he needs to do is understand that he’s wrong; that he needs to apologize.”

Yet an apology from Rochon—in response to an October event at which a two members of an alumni panel referred to a third alumna as a “savage” after she remarked on her “savage hunger” to succeed—has actually been blamed for inciting the protests in the first place, according to The Ithaca Journal.

Rochon’s response, posted on the school’s website, acknowledges the “insensitive” nature of the comments and notes that he apologized to the alumna immediately after the event, but also stresses that “the college cannot prevent the use of hurtful language on campus,” which is what at least some students seem to be demanding.

“We can’t promise that the college will never host a speaker who could say something racist, homophobic, misogynistic, or otherwise disrespectful,” Rochon asserted in the statement. “Even so, we reaffirm our commitment to making our campus an inclusive and respectful community.”