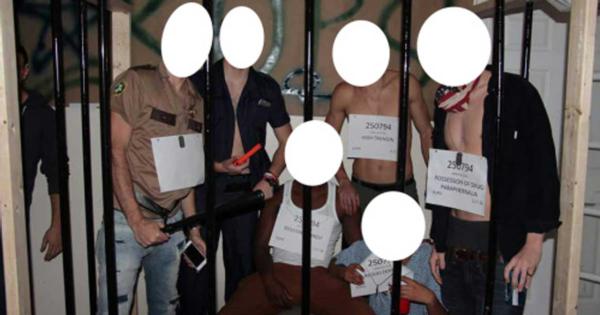 Students of Duke University and residents of Durham, North Carolina, gathered Friday evening to protest Kappa Kops, Delta Sigma Phi’s annual prison themed party, where they called for the abolishment of Greek life and prisons, “because they both serve to uphold a social order founded on white supremacy.”

The Kappa Kops party, held last Wednesday, included a jail cell and mugshot photo booth as well as students dressed up as prisoners and police officers.

The protesters, who call themselves #DukeEnrage, marched to the Delta Sigma Phi fraternity house chanting, “5, 6, 7, 8, America is a prison state,” and, “We comin’, we ready.”

After arriving at the fraternity, the protesters yelled, “We gonna give them hell, until they open every cell,” and held a giant sign that read, “No to police, no to prison.”

#DukeEnrage then held what a “teach-in,” where they read from a statement that specifically named “imprisonment, police brutality, [and] prison abuse” as the party’s trigger warnings.

“Our fellow classmates find it appropriate to so callously ‘party’ around a theme that has brought pain, suffering and violence into the lives of so many,” reads the statement, which was also distributed to students passing by.

The protesters argued in the statement that the party came at an insensitive time because it took place a few weeks after the death of Matthew McCain, an inmate at the Durham County Jail.

“This is just one example of the larger systemic way in which prisons operate in surveilling, brutalizing, disenfranchising marginalized communities,” the statement said. “We know that these Greek students are protected by the same police state they are able to seamlessly dress up as for their entertainment. They can do this because their bodies are not vulnerable to these systems of power that devastate the lives of so many in Durham, across the state, and the country at large.”

According to The Chronicle, over fifty onlookers gathered during the protest and started a back and forth dialogue with the protesters.

The Chronicle reported that onlookers argued that abolishing prisons isn’t feasible and that the frat party was like a game of Cops and Robbers.

“You’re making a joke about something that’s not normal...Some kids don't play cops and robbers because some kids get shot,” a protester responded.

After one protester compared the mass incarceration of “black and brown people” to the Holocaust, a Jewish student challenged the protesters but, according to a letter to the editor from Davis Lovvorn, he was “met with, in a horribly mocking tone, ‘Oh, are you offended?’”

“To me, this comment was hypocritical. These protestors claim to fight against racism yet mock a Jewish student expressing his concern over the Holocaust comparison...As Duke students, we’re better than this.” Lovvorn wrote.

The Chronicle reports that by the end of the event, the onlookers and protesters were shouting at each other and several university police were on the scene.

“It’s part of a whole chain of things happening at Duke but sometimes they are getting angry at things that have little relevance,” Luis Rodriguez told The Chronicle.

The protesters said that they hoped to educate people and to bring about change to the issues they were raising.

“We call to abolish prisons and abolish Greek life because they both serve to uphold a social order founded on white supremacy...and the violence enacted on the bodies of black, brown, queer, trans and low-income folks necessary to uphold the social order,” the protesters read to the onlookers.

Both the president of Delta Sigma Phi and the Office for Student Affairs declined to comment to Campus Reform for this article.