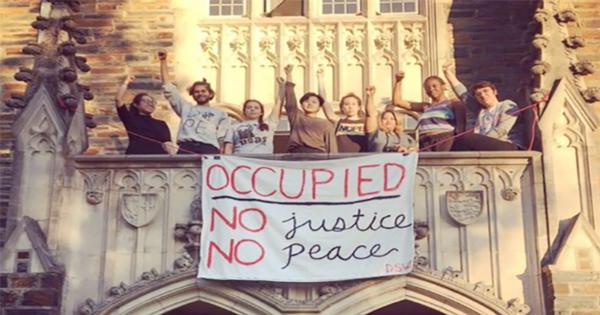 Duke University president Richard Brodhead broke his silence Wednesday evening to respond to students who have been protesting outside of his office for five days straight, but his offer was sternly rebuffed.

“While Duke has been frequently recognized as a leader in employee benefits and satisfaction, the recent student protest is consistent with our commitment to continually review and improve our workplace culture,” Brodhead wrote in a campus-wide email obtained by Campus Reform.

Nine students began their occupation of the Allen Hall administrative building Friday evening and vowed to remain until all of their demands were answered. Thus far, only one of the original nine students has left—in order to compete in a national poetry slam—but promised to return as soon as she is done tending to her prior obligations.

Dozens of students have gathered in support of the protesters by camping outside the president’s office.

Their demands, which have since been updated, are two-fold. First, they are calling for the immediate termination for of Duke Vice President Tallman Trask who allegedly hit a university parking officer with his car two years ago and spewed a racial slur as he drove away. Two separate university investigations concluded that there was insufficient evidence to press charges.

They are also calling for an outside investigation into Trask’s case.

Second, protesters are demanding that the minimum wage for all Duke employees be raised from $12 per hour to $15 per hour (though they have recently expressed a willingness to negotiate on that front).

[RELATED: Duke students refuse to end four-day sit-in until all demands are answered]

Brodhead replied to both sets of demands, but students claimed the response was “too vague, too noncommittal, and non-comprehensive” for them to end the sit-in.

Brodhead, in his response, promised to both “review the grievance and complaint procedures for Duke staff” and “initiate the process to further raise the Duke minimum wage of $12.00/hour.”

“The initiative will be led by a steering committee appointed by the president with the advice of counsel of Duke faculty, staff, and student,” he added.

The response, however, was not enough for the student protesters who, at the time of publication, still remained in the building.

Their new set of demands, issued after Brodhead replied, settles for a mere 53 cent raise starting December 31, with the minimum wage only rising to $15 on July 1, 2019 after a series of incremental increases.

A few of the protesters stepped outside Wednesday evening for a press conference to address questions and reply to Brodhead.

“We have two preconditions for voluntarily leaving this building and we believe those conditions are extraordinarily reasonable,” one protester said. “One, external accountability through an external investigation that can really find out what’s happening in these departments and make that available to all members of the community. And two, living wages for Duke employees.”

Protesters also side-stepped questions on the possibility of a forceful end to their sit-in.

Immediately following the press conference, the protesters continued chanting—the “occupiers” on the balcony and their confederates in the courtyard engaging in a call and response of “If we don’t get it/ Shut it down!”