Anthony Gockowski Contributing Editor/Investigative Reporter @AGockowski on May 12, 2016 at 8:19 AM EDT 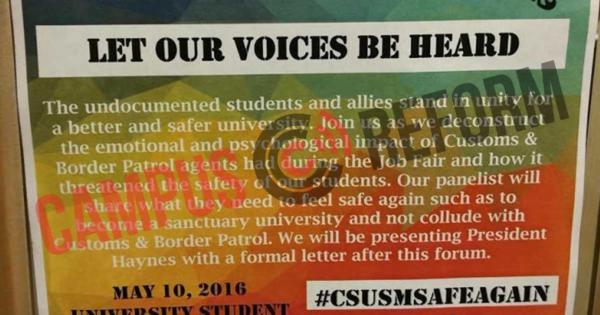 A group of “undocumented students and allies” hosted a “safe space forum” Tuesday to address the “psychological impact” of the presence of U.S. Customs and Border Patrol (CBP) at a job fair last month.

“The undocumented students and allies stand in unity for a better and safer university,” an advertisement for the event stated. “Join us as we deconstruct the emotional and psychological impact of Customs & Border Patrol agents had during the Job Fair and how it threatened the safety of our students.”

“Join us as we deconstruct the emotional and psychological impact of Customs & Border Patrol agents had during the Job Fair and how it threatened the safety of our students.”

In April, CBP set up a booth during a job fair at California State University, San Marcos, prompting the fear and outrage of a group known as “Standing Together As oNe Dream (STAND),” an illegal immigration advocacy group.

A faculty advisor to the group later sent an open letter to Career Center Director Pamela Wells explaining that she became alarmed upon arriving on campus for the job fair to find a CBP vehicle and three police cars (all empty) parked on campus.

“My heart froze because I immediately became concerned for our students’ safety and wellbeing,” she wrote. “When I parked in the parking garage, I texted [STAND President] Julio  and let him know what I saw, ask where he was, and if he (and others) were okay.” 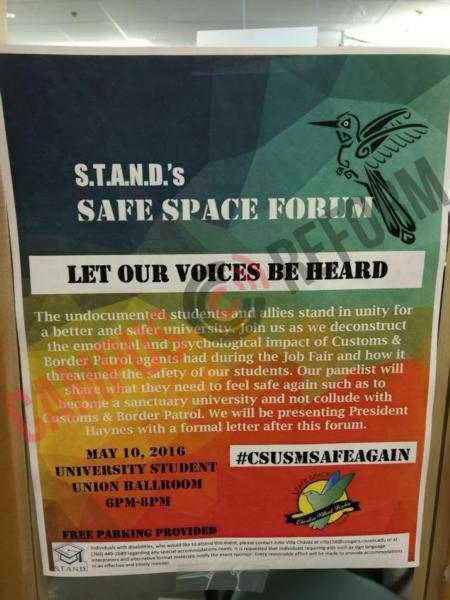 Julio then determined that the CBP vehicles were on campus for a routine career fair, but still elected to gather “students to assemble an impromptu protest to let Border Patrol know their practices in our community were unjust and detrimental.”

Now, a month later, students are demanding that their campus be converted into a “sanctuary university,” the advertisement for their safe space forum confirms.

During the forum, a group of panelists discussed “what they need to feel safe again such as to become a sanctuary university and not collude with Customs & Border Patrol,” according to a poster advertising the event.

The flier claims STAND presented a letter to the CSUSM President Karen Haynes with a "formal letter" following the panel.

CSUSM is not the only school with students who have rejected the Border Patrol. Last week, students at the University of California-San Diego also demanded their university become a "sanctuary campus."

Campus Reform reached out to STAND for comment, but did not receive a response by press time. This article will be updated to include their response if and when it is received.