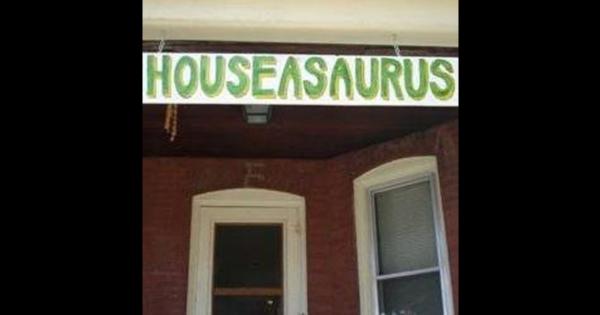 Residents of an LGBT community housing cooperative may soon be forced to find new accommodations after the property’s new landlord announced plans to replace the house with condos.

“Houseasaurus,” as it is affectionately known, typically hosts about 10 residents each year, but according to The Daily Collegian, several former tenants were recently informed that the property’s new owner plans to demolish the building when its current lease expires in 2017.

“I knew it had leftist roots, and that people with common values would live there.”

Houseasaurus was founded by anti-war activists during the Vietnam War era and revitalized during the Iraq War. For the past decade or so, it has been an LGBT-friendly housing option for nearby students and is considered to be an “underground meeting place” for LGBT students in the local area. A wooden sign that reads “Houseasaurus” sits above the porch.

Former Houseasaurus resident Emily Strauss told The Daily Collegian that Houseasaurus has historically “been a place to ground activism, especially anti-war activist efforts, adding that its mission is “based on three values: social responsibility, queer positivity, and sustainability.”

Houseasaurus tenants cycle in and out of the house each semester, and because house members embrace an egalitarian environment, any new members of Houseasaurus must be unanimously voted in by the other housemates. To find new housemates, Houseasaurus takes out ads on Craigslist and Facebook to advertise openings, and also accepts boarders who do not live in the house but pay between $55 and $110 per month for food.

“I am not directly involved, but I am friends with a lot of her residents and have been going there since freshman year,” said Michael Grasso, a senior who identifies as a member of the LGBT and drag communities. “They’re a huge force in the community—I know that no matter who I look like or what I am wearing, I am always safe there.”

Members at Houseasaurus also say the co-op offers better food options than does the college cafeteria.

“I was looking for more sustainable options, where I could be more in touch with what I was eating,” said Aysha Peterson, an agro-ecology student who was also attracted to Houseasaurus because she was “dealing with some coming out issues, like coming out as part of the LGBTQ community” after transferring to Penn State.

House members hold a communal dinner most nights, where they serve organic, vegetarian foods that are purchased in bulk from local suppliers. The house does not buy meat, but members are allowed to buy their own. Residents are also assigned chores, and the house uses a compost bin for recycling to be “environmentally sustainable.”

Houseasaurus’ name “sort of speaks for itself,” Strauss told Campus Reform. “Like, the house itself is a creature and a member of the co-op that has a lore of its own...The house can be kind of wild and animalistic, and it’s self reliant and self sustaining.”

Strauss also described feeling safe in the house and its family-like environment, saying, “I knew it had leftist roots, and that people with common values would live there...I liked the idea of living somewhere where I could help shape the atmosphere so I would have control over my own safety.”

In addition to its weekly meal, on Friday evenings Houseasaurus hosts “Conspiracy Cafe,” an open group discussion about current, hot-button social issues in the community, during which participants take turns sharing their opinions while facilitators moderate. Past discussions have revolved around racism, social inequality, and police brutality.

“As a queer person in State College, I feel relatively safe. But I know if I wasn’t white I would feel differently,” Strauss told Campus Reform. “I also know that State College struggles to be victim-centered when talking about sexual assault, so that marginalizes young people a lot.”

“It’s a salad of perspectives,” she asserted. “Overall, I’d say it’s safe, but it’s not where it needs to be. But we have gotten somewhere.”

Living at Houseasaurus “taught me to love my queerness,” Strauss said, adding that “living with other queer kids taught me how to dress in a way that was gender-affirming.”

Despite Houseasaurus’ long history, however, the existing lease expires in 2017, and the new landlord has already expressed an intent to level the house and build new condominiums as soon as the lease runs out.

House residents are worried that they will not be able to find affordable housing that can replace Houseasaurus, though some tenants are trying to find a way to keep the property by starting a fundraising campaign. Others are looking at alternative houses as a replacement, including a possible purchase through North American Students of Cooperation, a national co-op organization.

“One thing that is hard is that the rents here are really high, and we can’t afford to buy,” Strauss fretted. “Plus there are ridiculous zoning laws in State College, which make it hard for us to find a new house.”