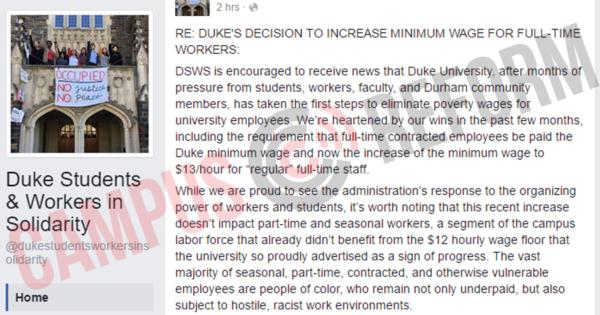 Duke University will once again increase the minimum wage for its hourly workers following a series of highly publicized sit-ins and protests by university students.

Effective January 1, 2017, Duke will pay its employees at least $13 an hour, The Duke Chronicle reports. The new wage floor will apply to all university employees who work at least 20 hours a week for 36 weeks out of the year, about 1,200 employees in total, and the university is also requiring its independent contractors to offer the same minimum wage to contracted workers by the end of the year.

“My own view is that doing so will not be particularly helpful.”

The wage hike comes in response to demands issued earlier this year by student protesters inspired by the “Fight for Fifteen” movement that has been agitating for such increases at all levels of government.

In April, nine Duke students occupied the Allen administration building for five days to call for a $15 minimum wage, among other demands. The protesters were members of Duke Students and Workers in Solidarity (DSWS), a campus group that advocates for higher wages, transparency from the university administration, and an end to anti-black racism at Duke.

Duke President Richard Brodhead responded to protesters by promising to form a steering committee that will “initiate the process to further raise the Duke minimum wage,” making this the university’s second capitulation to student demands for minimum wage hikes in as many years. 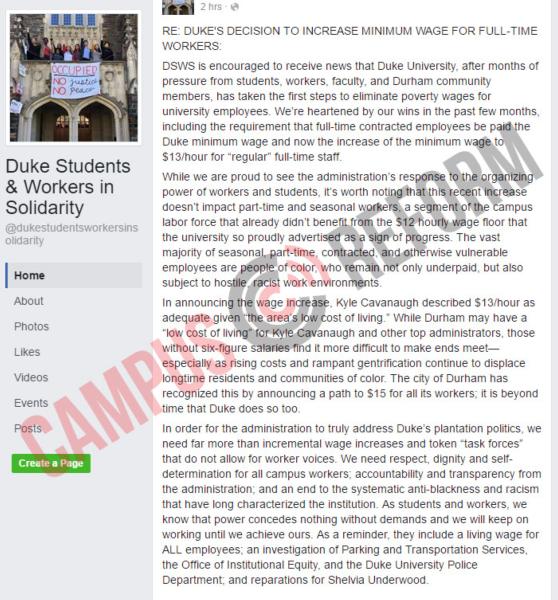 In July 2015, university administrators increased the wage from $10.91 to $12 after receiving several complaints from hourly workers and Duke students. Prior to that, Duke had last raised its minimum wage in 2012.

Vice President for Administration Kyle Cavanaugh praised the wage increase in a statement provided to Duke Today, saying that in addition to other services offered by the university, like health insurance, retirement, and generous paid time off, Duke’s new wage “reflects Duke’s commitment to being a leading employer in the area of total compensation.”

The higher wage, however, has not satisfied Duke Students and Workers in Solidarity, which declared in an August 11 Facebook post that while the group is “encouraged” by the $1 increase, its members believe it is “beyond time” for Duke to implement a $15 minimum wage for all workers.

DSWS criticized Cavanaugh and other administrators for claiming that a $13 per hour wage is enough to live on amidst Duke’s “plantation politics” culture, claiming that the workers who receive hourly wages are mostly people of color who are both underpaid and “also subject to hostile, racist work environments.”

A $15 wage, they declare, would be a step toward “eliminat[ing] poverty wages for university employees.”

Yet economics professor Peter Arcidiacano contradicted the group’s logic, telling The Chronicle that the wage hike could hurt rather than help Duke’s hourly employees.

“My own view is that doing so will not be particularly helpful,” especially for the disadvantaged, he remarked, saying the increased minimum wage could “discourage job creation and deter the University from hiring” new employees. As a result, the few jobs that would be available would be drawn away from disadvantaged people who really need them.

Cavanaugh, did acknowledge that the university might be able to consider a $15 minimum wage in the future, once the figure becomes more reasonable relative to the overall labor market.

“We review all of our pay ranges annually relative to the local and national markets,” he edplained. “We will make adjustments as needed based on those assessments.”