Will Rierson North Carolina Campus Correspondent @RiersonNC on Nov 23, 2016 at 11:12 AM EDT 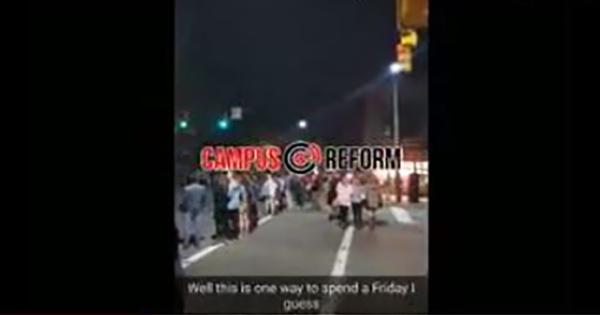 “Pussy grabs back” was among the more colorful slogans employed during the demonstration, which also featured more-pedestrian chants such as “blacks lives matter” and “love trumps hate.”

According to The Daily Tar Heel, the protest was organized by three local high school students via Facebook, but attracted a crowd of University of North Carolina students and other members of the community, as well.

Protesters met at Peace and Justice Plaza, across the street from the northern edge of campus, before marching toward the busy intersection of Franklin and North Columbia streets in downtown Chapel Hill, though members of the crowd appeared to disagree on the best location for the protest.

After standing near the intersection for several minutes, protesters moved toward the iconic Old Well on campus, chanting “Donald Trump can go to Hell, but we are going to the Well.”

There, participants spoke of the struggles they have faced since Donald Trump’s election until others convinced the crowd that returning to Franklin and North Columbia would make for a more visible presence.

The intersection, normally taken over by students to celebrate sports victories a few times a year, was soon occupied by dozens of protesters chanting lines like “black lives matter,” “water is life,” and “love trumps hate.”

Police directed traffic around the blocked roads, denying the protesters a chance to get their message out to motorists.

The protesters briefly echoed a 1995 Hillary Clinton speech given in China, shouting “women’s rights are human rights,” before moving on to a chant of “pussy grabs back” in reference to inappropriate comments by Donald Trump that became a major issue on the campaign trail.

[RELATED: American flag desecrated with ‘f*** you’ to Trump]

Sol Madar, one of the protest organizers, said there was tension and disbelief at Chapel Hill High School following the presidential election, but asserted that students felt there weren’t any other local opportunities to protest Trump, and so created their own.

“There’s been a resurgence of hate crimes across the U.S. following the election and I was tired of it,” Madar told the Tar Heel. “I wanted to get in the streets. I wanted to actually do something.”

Nikolai Mather, a high school senior in a neighboring district, was concerned with how some of his pro-Trump classmates reacted to the election outcome, declaring that “there is a definite uptake in racial slurs, sexual slurs, and queerphobic slurs.”

“A lot of the Trump supporters have harassed me and have gotten into my face and very aggressively shouting slurs,” concurred Maxine Portier-Young, the third protest leader, who claimed that she has personally experienced verbal violence.

Twenty-four-year-old Chapel Hill native Tatyana Davis said she brought her two-year-old son to the protest because she couldn’t find a babysitter that evening, but also because she wanted to instill a foundation of social awareness in him.

“He’s a baby and there are people who hate him already,” Davis complained. “I want him to grow up knowing what’s going on and be strong and independent, and not afraid to live his life because of the color of his skin.”