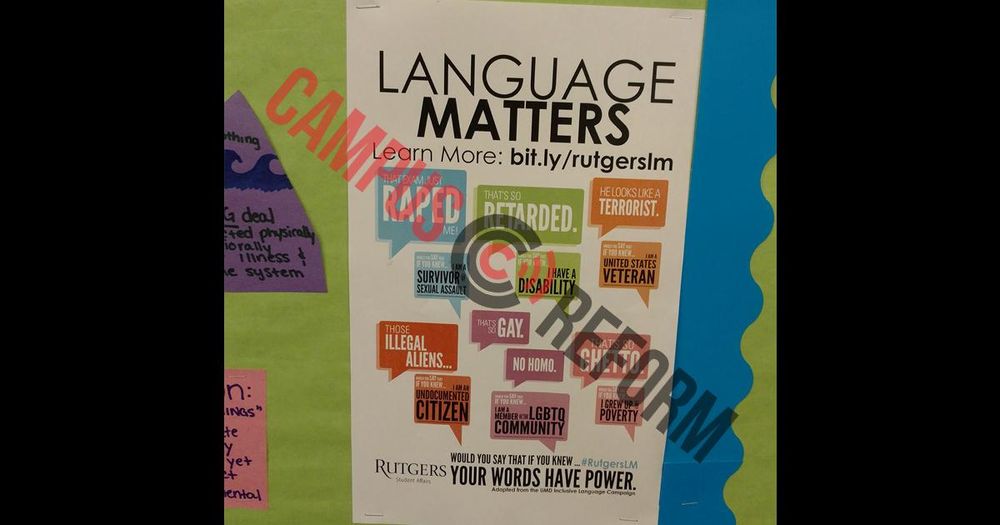 New Brunswick — Rutgers University requires freshmen to pay for their own microaggression training as part of the $175 New Student Orientation program.

During orientation, students are required to attend a one-hour “Language Matters” workshop, during which they will learn about “microaggressions” and “the big impact of ‘the little things.’”

The school acknowledges that microaggressions are “not the same as hate crimes or overt bigotry,” but asserts that such unintentional slights can still “make an impact” on students, even declaring that the workshop is not “making a big deal out of nothing” because “[a]ctually, it is a big deal and it goes deeper than just words.”

[RELATED: Rutgers: to avoid microaggressions, only speak when 'necessary']

“Victims of microaggressions often feel unsafe and not included,” the presentation explains, adding that microaggressions cause “significant long-term harm” and increase one’s risk of “illness and a decreased immune system.”

Students inspired by the workshop are directed to a number of resources they can use to help fight bias, such as filing reports with the school’s Bias Incident Response Team or visiting the school’s various diversity offices.

Developed by the school’s Center for Social Justice Education and LGBT Communities, the mandatory “Language Matters” workshop is part of an ongoing campaign at Rutgers University to teach students to be mindful of their language.

On the Rutgers University-New Brunswick campus alone, no fewer than five academic buildings currently have “Language Matters” posters hung up on bulletin boards, which warn students that “your words have power” and tell students to be mindful when they talk about issues such as terrorism and illegal immigration.

Rutgers University did not respond to a request for comment from Campus Reform.