Campus Reform | Penn prof says Republicans are ‘craven,’ ‘evil,’ calls 'Trumpism' a 'virus' of its own

Penn prof says Republicans are ‘craven,’ ‘evil,’ calls 'Trumpism' a 'virus' of its own

She says that Republicans “don't give a damn about anyone who is not white” and calls “Trumpism” a “virus” akin to COVID-19. 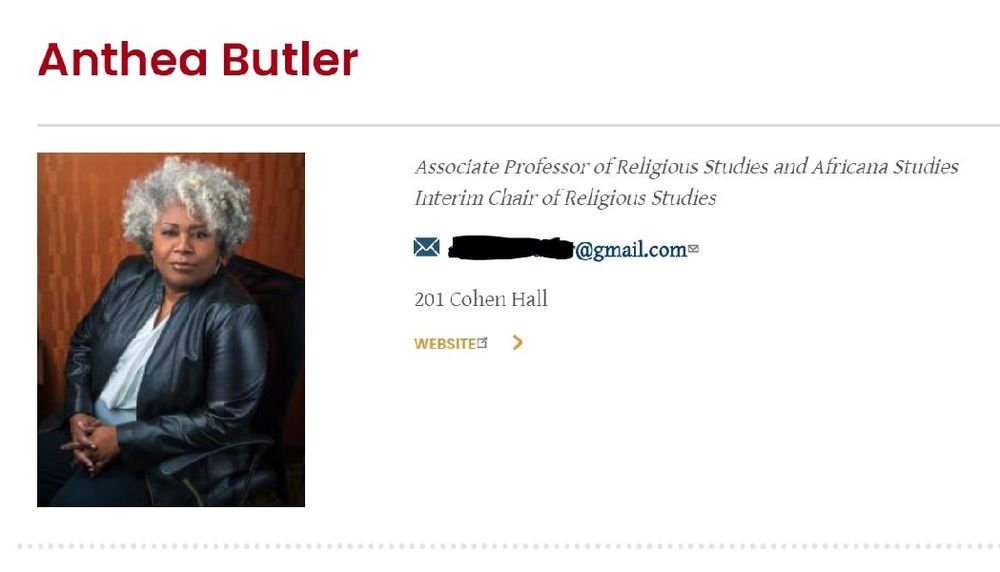 University of Pennsylvania religion and Africana studies professor Anthea Butler voiced her approval of the Biden-Harris Democratic ticket as well as her strong disapproval of the Republican party. In doing so, she called Republicans both “craven” and “evil.”

Although she believes that “there is a lot to critique” with the Democratic party’s presidential ticket, she is looking for candidates who can “go after Trump and the Republicans with gusto.”

“We are fighting against a party that does not give one happy damn about 160k people dying,”  Butler wrote. “They want kids in school and football games in a pandemic.”

In a vice presidential pick, she wants a fighter who can “dissect with a smile on her face these craven, evil people who don't give a damn about anyone who is not white.” Butler wants Harris to “invoke KALI” — presumably referring to the Hindu goddess of death often depicted as a Black woman — on the Republicans.

She mentioned a conversation with a “white, male, academic” priest friend of hers and criticized his desire to reach across the aisle: “Folks, that day is over. We must make sure the Republican party is in tatters after the election.”

According to Butler, the GOP is no longer a party, but an “ideology that has merged with the poisonous element of Trumpism” to “kill Democracy and America.”

“America is not only fighting the coronavirus. It is fighting a virus of racism, selfishness, and craven gain that is destroying our nation,” Butler said “That virus is Trumpism. Time to bring that virus of evil, stupid, asinine racism and self-aggrandizement to heel.”

Butler encouraged her followers to vote.

“And then be prepared like Belorussians to get out in the streets. Because we may very well have to.”

Butler doubled down on her comments in another thread: “If we don't get folks gathered up to protest and vote these evil folks out, they will be coming to lock us all up.”

Campus Reform reached out to Butler, who is currently the interim chair of the University of Pennsylvania’s Department of Religious Studies. This article will be updated once she responds.