MARSCHALL: I've taught writing about the Holocaust to college students. This is what Whoopi Goldberg and her critics need to understand.

The Nazis imprisoned my grandfather because of his ‘race.’

Trending
1
ANALYSIS: Academia is adrift in a sea of low standards
By Jared Gould
2
Have you or a loved one been 'affected' by 'free speech?' Colorado State University has…
By Alexa Schwerha
3
Stanford band mocks Christians during halftime show
By Thomas Stevenson '23
4
PROF JENKINS: Students have no right not to be offended
By Rob Jenkins
5
'Genderbread person' makes appearance in nursing course
By Caroline Cason  '22
6
Stanford Graduate Student Council saved 100 Black Panther: Wakanda Forever tickets for …
By Thomas Stevenson '23
Zachary Marschall, PhD | Editor in Chief
Sunday, February 6, 2022 12:00 PM

Campus Reform Managing Editor Zachary Marschall holds a PhD in Cultural Studies from George Mason University and is an adjunct professor at the University of Kentucky.

Whoopi Goldberg said this past Monday on The View that the Holocaust was not “about race.” The criticism and outrage cascaded in almost immediately.

Aside from her ignorant comments, equally problematic was her apology. It demonstrates the discrimination American Jews encounter when those on the left whitewash Jewish history to make a point in the name of inclusivity.

“On today’s show, I said the Holocaust ‘is not about race, but about man’s inhumanity to man.’ I should have said it is about both,” Goldberg tweeted in a sincere, yet still misguided, apology later that same day.

Considering the harsh criticism Goldberg rightly received – though her suspension from The View is wrong – there was little critical attention paid to her apology, which is the piece that reveals what informed Goldberg’s opinion.

Rather than having made an isolated misstep, Goldberg is an example of those on the left who consciously or unconsciously find it necessary to minimize the history of Jewish suffering.

Goldberg’s apology did not contradict the underlying assumption in her original comments that racial categorizations are constant.

[RELATED: Temple U: Holocaust-questioning professor part of ‘diverse faculty’ that leads to ‘vigorous exchange of ideas’]

By “constant,” I mean that Goldberg’s interpretation of European events from 1933-1945 suggests that cultural conditions across time and nations are always identical to American social unrest in 2022.

In other words, since a social construct is artificial and temporary, then the concept of a White person cannot transcend time and geography without change.

In February 1947, the Mannheim police in post-war Germany issued my grandfather a “Sonderausweis,” or "Special Pass" document, certifying his persecution during the Holocaust.

In English: "[F]or people who were imprisoned on political, racial or religious grounds during the Nazi regime." 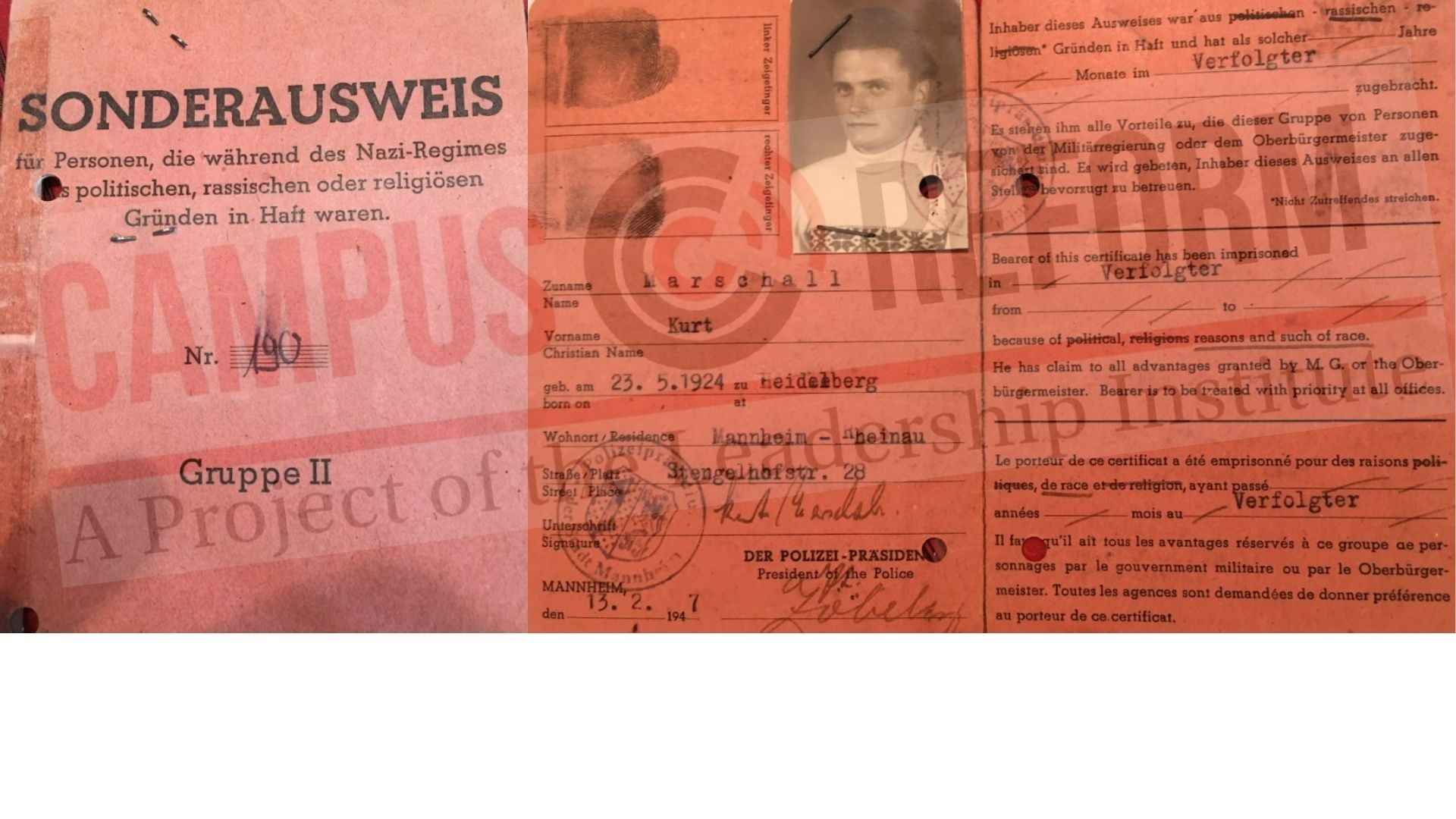 Within the booklet, the Mannheim police make clear that my grandfather, who later lived in the United States as a wealthy White man, was imprisoned in Dachau due to his race, or "rassichen."

The authorities crossed out "politischen" (politics) and "religiosen" (religion) but underlined "rassichen."

The Holocaust came about due to a sequence of events in Europe following World War I, during which the Nazi regime harnessed peoples’ preexisting, centuries-old hatred of Jews.

"Anti-Semitism is the oldest of all hates," University of Southern California Professor Robert Adler told Campus Reform in December.

While that statement is true, it should never be a competition about which group has suffered the most.

Instead, the idea that the Holocaust is also about “man’s inhumanity to man” sanitizes what the Nazis did, and erases the elements that separate this slaughter from other pogroms and discriminatory acts in Jewish and world history.

It is the singularity of the Holocaust that neither registered with Goldberg nor her critics.

I have experience teaching that singularity on a college campus.

In 2015, I was a second-year PhD student at George Mason University and teaching freshmen at the school. For one unit, several instructors and I took the first-year students to the United States Holocaust Museum, located in Washington, DC.

During the visit and in the subsequent class discussion, I challenged my students to find the contradictions within the Nazi operation.

What were those contradictions?

Consider the barbarity of the gas chambers and medical experiments, I told them, but notice in the historical photographs how clean and orderly the Nazi doctors maintained their spaces.

Then consider, I said, the senseless mass loss of life over a short period of time during the chaos of war, but pay attention to the precision by which the Nazi regime maintained records and processed bureaucratic matters.

Those contradictions make the Holocaust a singular event. There is an element of reasonable comparison between various mass genocides in history, but the medical and intellectual rationality by which the Nazis carried out their Final Solution makes the Holocaust incomparable.

New Yorker writer and Columbia University lecturer Hannah Arendt tried to explain those contradictions in her 1963 book Eichmann in Jerusalem. Arendt characterized the logistical management of scientifically rationalized mass slaughter as the “banality of evil.”

Arendt received intense criticism for her poorly packaged critique of Nazi mundaneness, but the aspect of the Nazi operation referenced by Arendt is the same aspect that Goldberg and those that criticized her last week still largely fail to appreciate.

This singularity is why Holocaust comparisons of any kind invariably backfire in political debates.

Taken as a whole, Goldberg’s apology echoes Canadian Prime Minister Justin Trudeau’s 2017 speech at the country’s National Holocaust Monument. In bending over backward to memorialize the Holocaust in an inclusive manner, Trudeau neglected to make any mention of Jews.

These comments are not one-off incidents, but rather they are evidence of a collective cultural disposition to bracket Jewish persecution, driven by the fact that the question of Jews’ racial identity inconveniences the left’s false diversity narratives.

Last month, former New York Times journalist Bari Weiss wrote about the dangerous implications of this disposition, lamenting that while mainstream liberal media covered the Tree of Life synagogue massacre thoroughly, it quickly forgets or ignores when Jews are victims of violence perpetrated by non-White individuals.

“When eleven Jews who look like me were shot by a white supremacist in Pittsburgh, it was a clean story. Here was unadulterated evil mowing down the innocent,” Weiss wrote. “But Jews dressed in black hats and strange clothes with obscure accents? The ones in Jersey City or in Monsey or Crown Heights or Williamsburg or Borough Park?”

The bottom line, according to Weiss, is that Jews who do not appear to be White, as “anti-racist” activists imagine White people, are “imperfect victims.”

In December, Campus Reform covered the Heritage Foundation’s report that found the number of anti-Semitic attacks on college campuses increased 34.8% from the 2019-2020 to 2020-2021 school years.

The report “raised concerns [from Jewish leaders] over whether or not DEI [diversity, equity, and inclusion] programs succeed in establishing an inclusive environment on college campuses,” Campus Reform reporter Alexa Schwerha wrote at the time.

Such events should cause national outrage, right?

Nope. There is no outrage, only dangerous equivalences such as those offered by Goldberg and Trudeau.

While anti-Semitism transcends the political divide, ordinary people in this country learn to whitewash the Jewish experience from leftist intellectuals who normalize such thinking for American society at large.

Last month, Campus Reform reporter Peter Cordi interviewed University of Pittsburgh Professor David Harris after the scholar said, “We need to remember at all times that anti-Semitism is White supremacy” during a virtual event.

Cordi asked Harris how he would explain the man of Pakistani origin taking Texas synagogue congregants hostage the previous week if anti-Semitism is only the result of White supremacy.

Harris walked backed his comments, qualifying that White supremacy is only part of anti-Semitic hate.

Though Harris admitted his error with the same grace as Goldberg, would he have acknowledged his reductionist whitewashing if Campus Reform did not follow up?

Those who attended the event were left with the impression that indeed “anti-Semitism is White supremacy.”

Unfortunately, those that hear such messages are the least likely to read Campus Reform's reporting on Harris’ correction.

But it is what remains uncorrected in her apology, and unobserved by reactionary media pundits, that poses the real danger.

The left’s stubbornness to see Jews as a multi-racial ethnoreligious group explains why Jews are not kept safe on campus by DEI initiatives, and why there is indifference to anti-Semitic violence from non-White supremacists.

Those who deny how and when anti-Semitism rears its head in polite society, on the political left, and from non-White individuals need to be more sophisticated about race, the world, and history.

The oldest hatred persists because too many people refuse to confront the ugly truth about it.

Zachary Marschall received a PhD from George Mason University and is an Adjunct Assistant Professor at the University of Kentucky. "Academically Speaking," his series for Campus Reform, reveals how radical ideas originating in academia impact Americans’ daily lives. Zachary is a member of the National Association of Scholars.