The flyers insist they are not anti-Semitic, insisting that "believing crazy things...is a human right."

The new posters question whether the school should accept contributions from Jewish donors, and complain about the percentage of Jewish students at several other schools.

The University of Illinois at Chicago was hit by another round of anti-Semitic flyers attacking “Jewish privilege” Saturday. 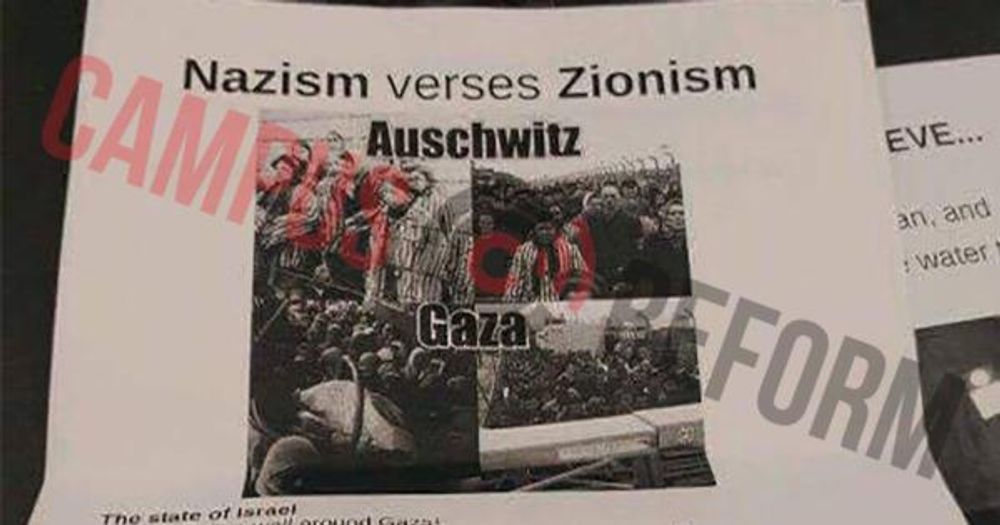 The University of Illinois at Chicago was hit by another round of anti-Semitic flyers attacking “Jewish privilege” Saturday.

Just one day after Campus Reform reported on the appearance of a poster on UIC’s campus declaring that “ending white privilege...starts with ending Jewish privilege,” several additional variations have popped up making even more provocative assertions.

The initial poster, discovered last Tuesday, prompted UIC to issue a statement reaffirming “our collective commitment to two fundamental principles...the first is the importance of tolerance, inclusion and diversity to our university community; and the second is the right to free expression that ensures we are a place of open inquiry and learning. Both of these principles are fundamental to who we are and what we aspire to be as a university.”

Perhaps taking the call for open inquiry seriously, one of the latest posters lists several conspiracy theories that “you are allowed to believe,” including, “We never went to the moon,” “the Queen is a shape shifting reptilian,” and “‘the Globalists’ put chemicals in the water to make the frogs gay.”

“But when you question the 6 million (referring to the number of Jewish deaths in the Holocaust) they put you in jail in 17 countries,” the poster states. “Believing crazy things is not a crime. Expressing a dissenting opinion about history is not a crime either. It is a human right.”

The second poster displayed the headline “Who is Steven Salaita?...And why does the University of Illinois not want YOU to hear him?”

Salaita was a professor at the University of Illinois, Champaign whose tenure was revoked after he posted anti-Semitic comments on social media.

“Steven Salaita was unhired from the University after Tweeting about the ongoing genocide in Palestine. He lost his tenure and his house” the flyer states, adding,, “Chancellor Phyllis Wise met with a wealthy Jewish Donor in Chicago before the decision to dump Salaita. She was forced to resign after she destroyed emails that belong to the public record that show the meeting. The University of Illinois payed $875,000 to settle the case.”

The poster then asks, “If that is not an admission of guilt, what is?” proposing that “maybe tuition would be cheaper if the university stopped paying people to teach.”

After saying all of that, the poster then states “Maybe Jewish ‘donations’ to the University come at too high a price.”

Anticipatorily, it goes on to declare defensively that “Questioning the influence of the university donors is not anti-Semitic. It is not defamatory. It does not insult anyone. It is social justice.” The hashtags “#BlackLivesMatter #WeAreAllMuslim #IStandWithSteven” are included in the poster.

The third poster absurdly compares Zionism to Nazism, reasoning that “the state of Israel Built a wall around Gaza, doesn’t allow Gaza to have an airport or seaport, and Limits the number of calories per person to less [sic] than 2000.”

Then the poster compares this to a concentration camp by saying “When you...Built a wall around people, Don’t let them out, and starve them...you have created a Concentration Camp.”

Based on the statements above, the poster concludes that “the largest Concentration Camp in the world today is owned and operated by Zionists.” Echoing its fellow, the bottom of the flyer then says, “Standing up for Palestine is not anti-semitic. It is not defamatory. It does not insult anyone. It is Social Justice,” followed by the same hashtags, “#BlackLivesMatter #WeAreAllMuslim #StandWithPalestine”

The last poster reflects the initial poster, which consisted of the headline “Ending White Privilege…,” defined “Privilege is the special rights and advantages that are available only to a person or group or people.”

The poster then poses the question “If Jewish Americans make up 2% of the Jewish population…Why do they get a special Privilege when it comes to top universities?” Which is then followed by a graph showing the percentage of Jewish students at top universities.

The poster then concludes the headlining statement by saying “...Intersects Ending Jewish Privilege.”

Following the theme of past posters, this one ends with the statement “Challenging White Privilege and Jewish Privilege is not anti-Semitic. It is not defamatory. It does not insult anyone. It is Social Justice.” Then the poster uses the same hashtags “#BlackLivesMatter #WeAreAllMuslim #WhitePrivilege”

UIC alumni and students expressed renewed outrage at the continuous hatred being advertised on their campus.

“I am happy I graduated when I did because anti-Semitism and anti-Israel [sentiment] is on the rise at UIC,” said one recent alum who requested anonymity. “And there have been incidents that have many Jewish students on campus feel unsafe. Especially when the university fails to do anything to stand up to it. I ashamed to be an alumni [sic] of UIC.”

Senior Amitai Loew, who emailed the school’s administration in response to Tuesday’s incident, told Campus Reform that he doesn’t feel threatened, rather “just annoyed” at the apparent lack of urgency from the school in response to the anti-Jewish threat.

“I almost wish that someone would vandalize something so UIC actually had to address the issues on campus instead of wasting our time and their breath covering their asses,” Loew said. “UIC Police obviously don't have their shit together. They claim to be investigating and wanted us to leave the signs alone and call them; today when the students who called found them, the police showed up, threw them in the trash, and left.”

He explained that there was a meeting last Wednesday between campus police, Hillel, and Chabad on campus, during which the police told those in attendance to leave the posters hanging so that the police can use them as evidence. However, he said that when contacted today, UIC Police “took down the fliers and threw them in the trash, even though the students insisted that they not do so.”

“It's one thing for flyers to be put up but if this incites violence against Jewish students (as has happened on other campuses) it's going to take a lot more work from the UIC administration than a strongly-worded email,” alum Avi Yudkowsky told Campus Reform.

“Considering how tolerant my experience on the campus was I'm hoping that the strongly worded support from the administration is enough to stop this problem from getting worse,” he said, but added, “If it does get worse, and UIC becomes the kind of place that targets Jewish students and Israel events (like UC Irvine and Berkeley for example) it would break my heart to turn my back on UIC, but I'd have no choice.”