MAP: This is where communists, dictators are celebrated on college campuses

Campus Reform compiled a round up of which universities are promoting Marxist ideology.

Campus Reform reports on the spread of Marxism and other leftist ideologies on college campuses.

Spanning coast to coast, there are numerous incidents of dictators or communists being celebrated on campus through quotations, titles, and statues.

Below is a list of some of the incidents Campus Reform has covered in the last few months. 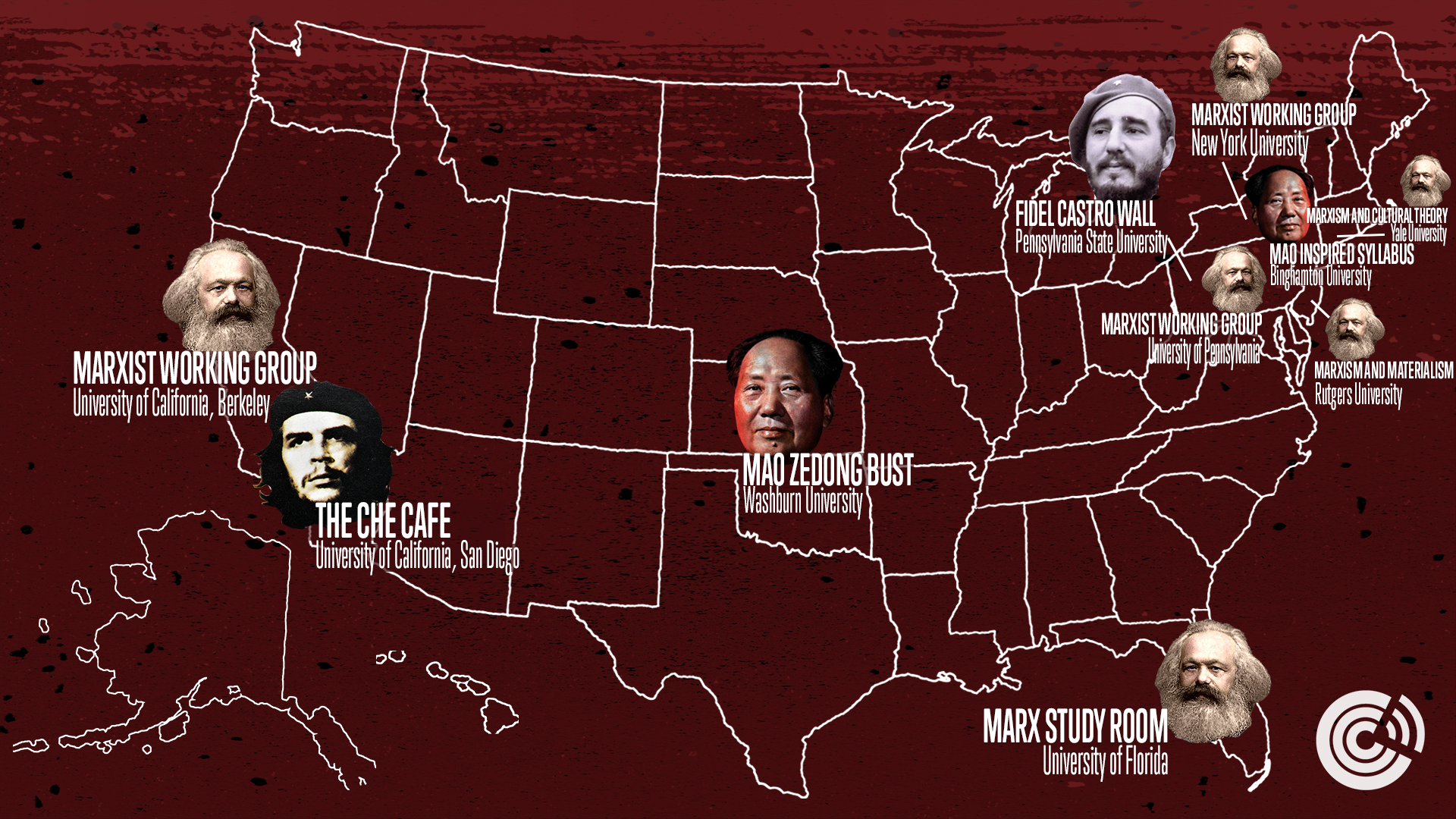 The University of California, Berkeley, has a working group called the "Interdisciplinary Marxist Working Group." The stated purpose of the group is to “discuss Marxist” texts in the context of the “relevance of Marxism to the current historical moment.”

In a previous article, Assistant Vice Chancellor for Executive Communications Dan Mogulof is quoted telling Campus Reform that the university values the “importance of diversity of perspective."

Mogulof continued by stating that programs on campus “do not speak for or represent the values, perspectives, or positions of the University.”

The CHE Cafe at the University of California, San Diego, named for the Marxist Argentinian dictator Che Guevera, is a location dedicated to paying “homage to the Argentine Revolutionary.”

The area is described as being “a unique meeting and gathering space for radical/leftist/progressive political groups and events,” according to its constitution.

The CHE Cafe was also a registered student organization for the Fall 2021 semester.

A Mao Zedong bust is on display at Washburn University, which is located in Kansas. The dictator is featured in a display alongside other political leaders such as Bernie Sanders, Barry Goldwater, and Bill Clinton.

The bust has allegedly been on display for nearly two years and is larger than any other figure.

The University of Florida named a study room after Karl Marx. The space featured a plaque describing the socialist revolutionary as a “philosopher, radical economist, and revolutionary critic.”

The plaque continues, “The unique extent of the influence of Marx’s materialist explanation of the workings of society, economics and history, invariably saw Marxist theory extend its influence to literary criticism.”

Marxism and Materialism is a working group sponsored by the Rutgers School of Arts and Sciences. This group is said to examine “contemporary uses across historical, humanistic, and social scientific disciplines that engage the dilemmas of political economy, power, and domination.”

Additionally, the group recognizes Occupy Wall Street and the Movement for Black Lives as organizations helpful to the examination of “global capitalism’s contributions to racial, gender, and social domination.”

A Fidel Castro quote at Pennsylvania State University was displayed on a wall in the Paul Robeson Cultural Center.

The quote read, “[T]he equal right of all citizens to health, education, work, food, security, culture, science, and wellbeing - that is, the same rights we proclaimed when we began our struggle, in addition to those which emerge from our dreams of justice and equality for all inhabitants of our world - is what I wish for all.”

After the quote was removed, some outraged students issued disagreement with the decision, arguing that the removal showed a “lack of support for students of color.”

A professor at Binghamton University began a section in her syllabus with a quotation from murderous Chinese dictator Mao Zedong.

The syllabus for “Social Change -Introduction to Sociology" also demanded that White male students wait to participate in class discussions until after “non-white folks” talk.

Campus Reform Correspondent Sean Harrigan, who is a student in the class, filed a Title IX complaint. Harrigan told Campus Reform that he later received an email telling him that the professor was asked to change her syllabus.

The Marxism Working Group at New York University describes itself as “grounded in the political-economic critique of capitalism.” It focuses on “Marxist accounts of race and gender.”

Avery is the Web Content Editor at FreedomWorks. She was previously the Digital Media Manager at Campus Reform after interning in the Leadership Institute's Studio's department and a US Senate campaign. She is from Wingate, North Carolina, and a graduate of the University of North Carolina at Charlotte.