Pro-life activists discovered what they believe to be the bodies and parts of aborted fetuses stored in paper bags at the University of Washington Birth Defects Research Laboratory.

A congressional panel revealed in 2016 that the university had ties to local abortion clinics and was distributing tissue to 40 other research institutions, making it the nation’s largest fetal tissue bank.

Trending
1
These 10 Christian universities are promoting abortion, Planned Parenthood
By Georgia  Lucas '23
2
Stanford band mocks Christians during halftime show
By Thomas Stevenson '23
3
ANALYSIS: Academia is adrift in a sea of low standards
By Jared Gould
4
Have you or a loved one been 'affected' by 'free speech?' Colorado State University has…
By Alexa Schwerha
5
PROF JENKINS: Students have no right not to be offended
By Rob Jenkins
6
'Genderbread person' makes appearance in nursing course
By Caroline Cason  '22
Katelynn Richardson '22 | Senior Nevada Campus Correspondent
Friday, April 1, 2022 5:03 PM

While UW continues to distribute and traffic the body parts and whole cadavers of unborn children at a rate that surpasses any other known institution in the United States, activists were able to locate the freezer, pic.twitter.com/lOGciVx48n

A photo of the freezer taken on March 9th shows rows of paper bags, which activists believe contain the bodies.

On March 9th at 6:30pm, Anti-Abortion activists from groups including PAAU, @TheSurvivors , @prolifesf, & @RehumanizeIntl gained access to the largest & pic.twitter.com/CQM4Sakuri

The University of Washington informed a congressional panel in 2016 that it had in the past obtained, and was currently still receiving, fetal tissue from abortions done at a number of local clinics. It also reported distributing this tissue to 40 other research institutions.

Through independent research, the same panel found that, “the university maintains a close relationship with area abortion clinics that includes the deployment of medical students to the clinics and faculty status for the clinics’ staff physicians.”

The panel called the university’s response “insufficient” for a full analysis, as it failed to provide details, documents, or financial records on its fetal tissue transactions, stating only that recipients are “charged a flat fee of $200.”

The University of Washington houses the largest human fetal tissue repository in the US, according to a report from the Charlotte Lozier Institute. The organization’s vice president of research Dr. David Prentice called it “the Amazon for baby body parts.”

“Storing these organs and body parts in paper bags might be more convenient for their ‘next day’ and ‘same day’ delivery options but only emphasizes how their entire trafficking operation is out of touch with the intrinsic value and dignity of each human being,” he said in a Mar. 24 statement.

Founder & Executive Director of PAAU Terrisa Bukovinac explained to Campus Reform how her organization accessed the freezer and confirmed its contents.

They also found a notice outside the freezer from a medical waste company, Stericycle, which Bukovinac says “regularly does business with abortion facilities across the country.”

Campus Reform obtained a photo of the notice from Bukovinac. 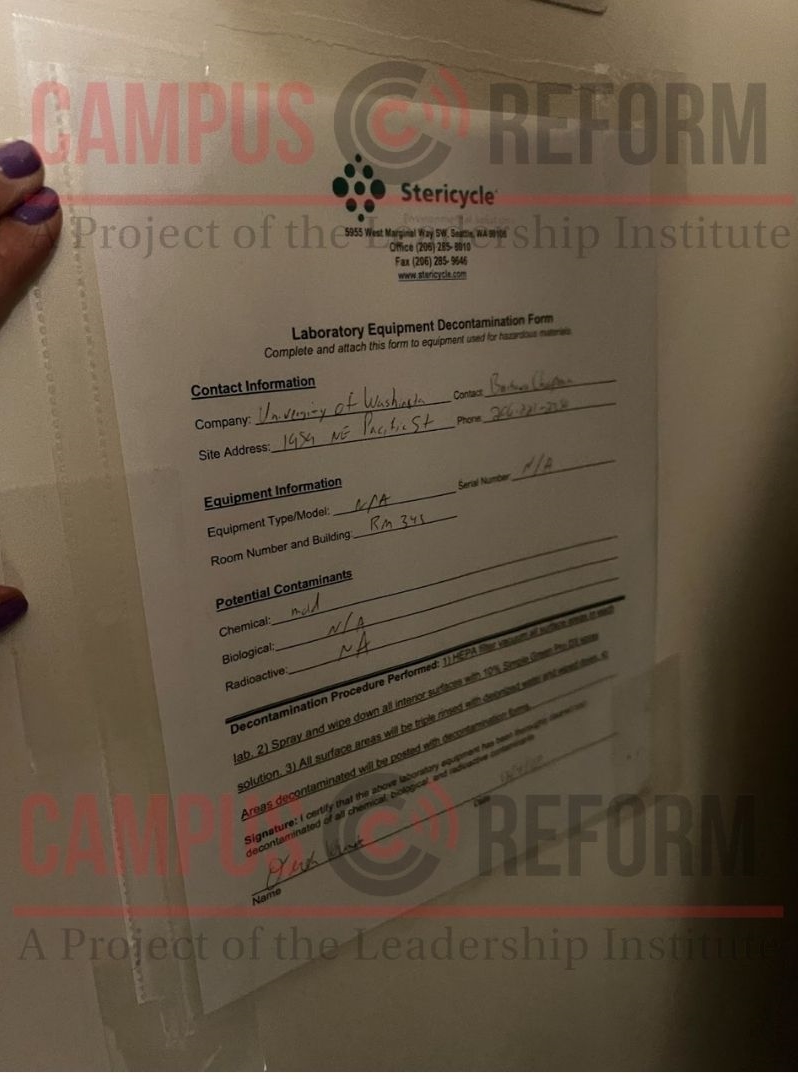 She also notes that the Stericycle website describes boxes like the ones pictured as “containing animal or human body parts as opposed to other types of storage containers for different types of ‘medical waste.’”

The company has a long history of ties to the abortion industry, which has been exposed by organizations like Created Equal.

“Procuring ‘pristine’ fetal organs for research requires withholding feticides to preserve the stem cells,” the statement continued. “This means these often late-term fetuses are torn apart and dismembered alive or, ideally for experimentation, they are delivered through an induction process which, at these late gestational ages, produces born alive infants over half of the time according to a study published in the National Library of Medicine.”

Though it is a primary source of fetal tissue, the University of Washington is not the only university receiving federal funding for this kind of research.

A White Coat Waste Project analysis obtained by Campus Reform in 2021 revealed that American colleges and universities are “ground zero” for taxpayer-funded human fetal tissue research projects, with $50 million going to these projects in the Fiscal Year 2020 alone.

Campus Reform has covered other stories, including documents obtained by Judicial Watch last August, which revealed the University of Pittsburgh may have been involved in harvesting organs from live fetuses.

The Judicial Watch report drew calls for an investigation from lawmakers and prompted the university to hire an external law firm to review its research.

A study published by researchers at the University of Pittsburgh revealed it was also conducting experiments that involved grafting the scalps of aborted babies onto rodents.

According to PAAU Organizer and Seattle resident Kristin Monahan, fetal organ harvesting and trafficking practices occur in Seattle and nationwide.

"The reality that fetal organ harvesting is happening here in Seattle is heinous. These are our fellow community members whose body parts are being trafficked when they are much too young to understand what is happening,” Monahan said in a press release.

“These practices have a depressing effect on the adult family members and our community as a whole. I want better for my friends and peers, and their children alike."

Campus Reform reached out to the University of Washington and Monahan for comment but did not receive a response.