Between Apr. 30 and May 2, the University of Mount Union’s Turning Point USA chapter posted a series of pro-life photos on its Instagram expressing pro-life views.

A petition circulated to ban the chapter for 'bigotry' and the group's faculty advisor resigned.

The University of Mount Union's Turning Point USA (UMU TPUSA) chapter has lost its faculty advisor and status as an official student organization at the Alliance, Ohio, school after the group posted a series of pro-life photos on its Instagram.

Campus Reform obtained screenshots of the posts, which were posted between Apr. 30 and May 2 but are now deleted. 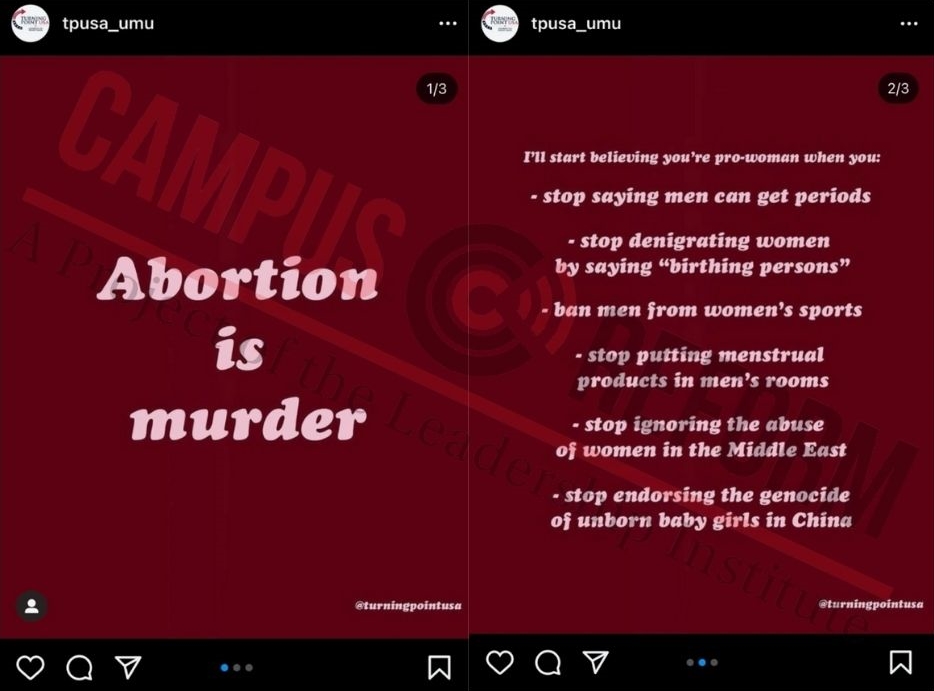 According to UMU TPUSA President Aleana Smiley, the anti-abortion posts were popular but were also met with an angry response from a Mount Union alumnus.

Both Smiley and the alum were contacted by Campus Reform. The latter requested to remain anonymous.

The alum went to great lengths to ensure action was taken against the TPUSA chapter, emailing the university and accusing the organization of “violating Title IX”, which prohibits schools receiving federal funding from discriminating on the basis of sex.

She continued her attack on the group by taking to social media. The alum called out Smiley, posting “Hey girl, I want you to have the right to an abortion too!” 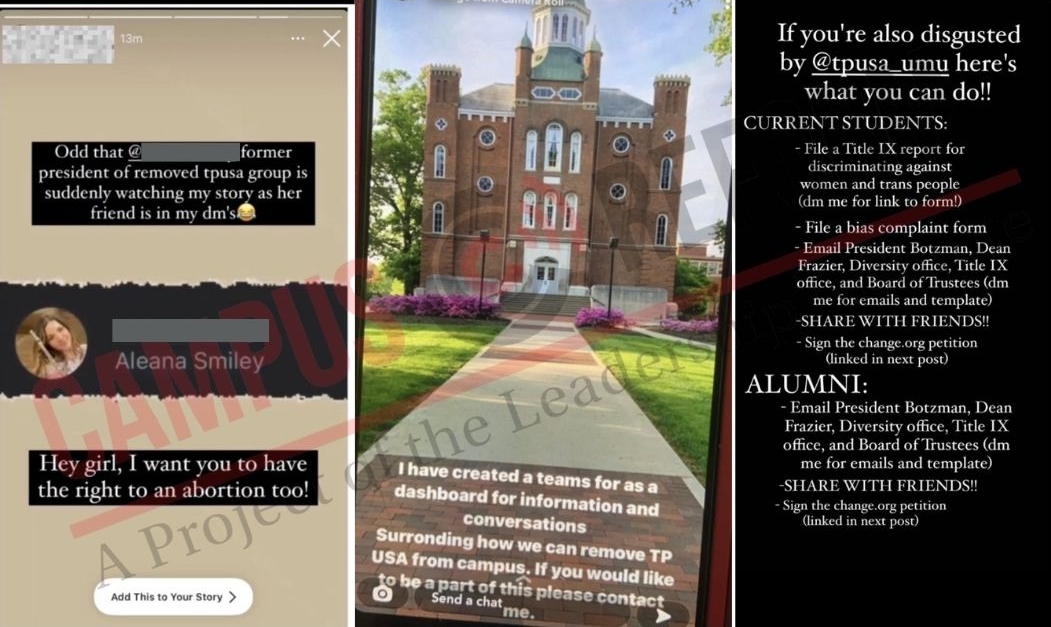 The anonymous UMU alum told Campus Reform, “TPUSA had several Title IX violations and that in itself is enough for their removal on campus.”

The flurry of social media attacks sparked a petition on Change.org advocating the removal of the chapter.

The petition was created by “a concerned student” that claims the TPUSA chapter is “spewing transphobic and dehumanizing statements.”

The anonymous UMU senior did not include any photos or evidence for this accusation, but presumably was referring to the recent post by TPUSA regarding abortion.

TPUSA, according to the petitioner, is “a hate fueled, and bigoted, hate club that has no place on our campus.”

After the storm of controversy, the chapter’s faculty advisor Keith Miller stepped down from his position, according to Smiley.

The university then reached out to Smiley via email on May 6, informing her that since the group no longer had an advisor, they would no longer be considered an official student organization. 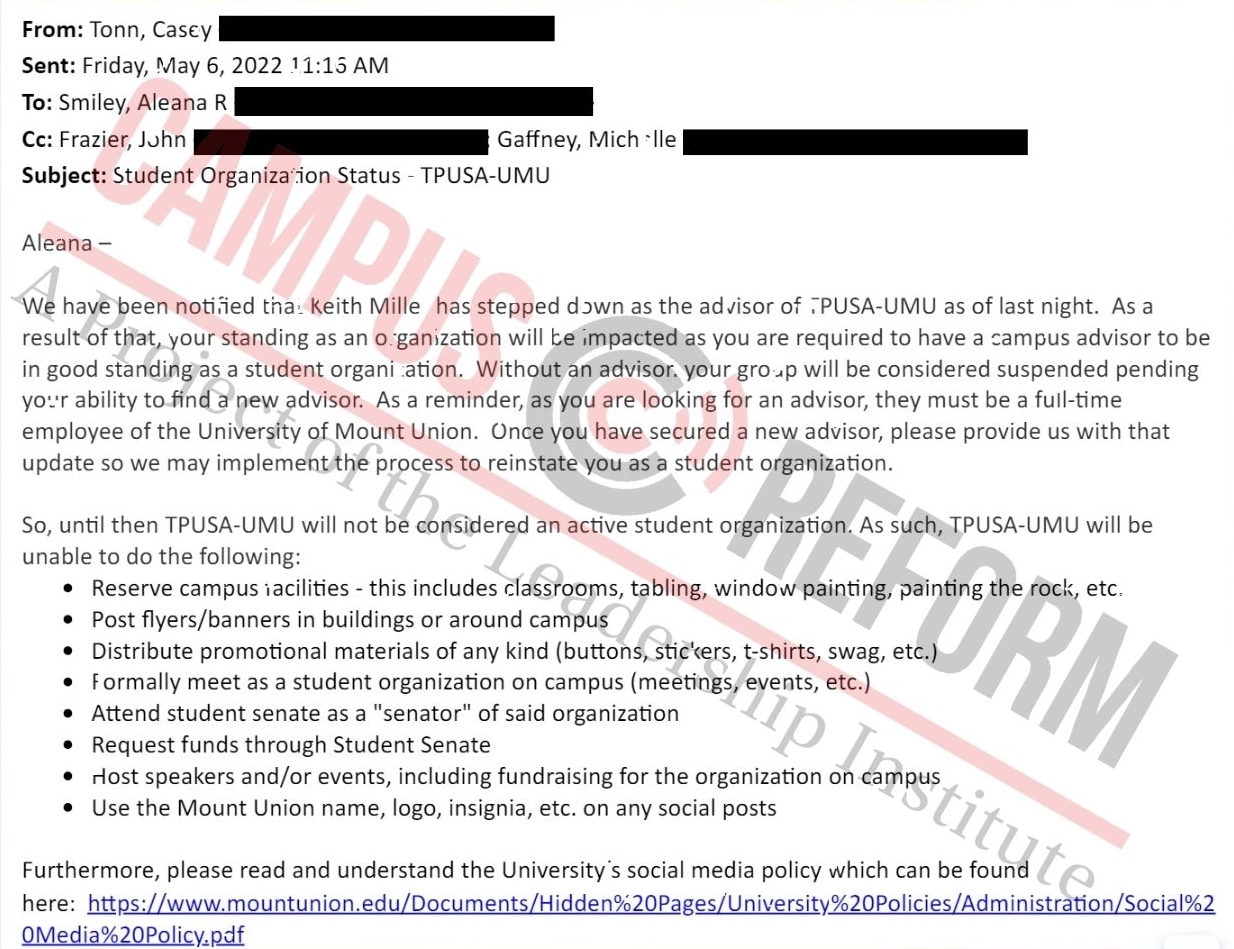 Lacking official status from the university exempts a group from putting up flyers, having speakers, holding events, tabling, and wearing any promotional materials. The group subsequently had to remove their social media accounts.

Smiley expressed to Campus Reform that she believes the university has been very unhelpful to their group since the start of the school year.

After Miller resigned, Smiley met with Dean of Students John Frazier to discuss the status of the TPUSA chapter.

According to Smiley, she wanted to find some way to save TPUSA’s status as an official club, but Fraizer was ultimately unhelpful.

The university did not even allow a grace period for the group to try and find a new advisor, Smiley told Campus Reform.

The university and Miller have been contacted for comment. This story will be updated accordingly. 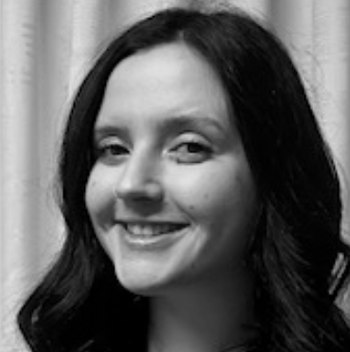 Alyssa Patterson is a sophomore at Central Michigan University studying Business Management. Alyssa has been a member of the College Republicans at CMU and has been elected to serve as President for the upcoming school year. Alyssa has always held strong conservative beliefs and her main goal is to expose liberal bias on college campuses in order to encourage like-minded students to share their beliefs freely.