Following a Freedom of Information Act request, Campus Reform has discovered that SUNY Brockport received hundreds of emails from enraged police officers and their families following the event's announcement.

Muntaqim, formerly ‘Anthony Bottom’, was convicted for the murder of two New York police officers after he lured them to his location with a fake 911 call in 1971.

Following a Freedom of Information Act request, Campus Reform has discovered that hundreds of emails were received by the university after the event was advertised online, many of them from upset police officers and their families.

For example, Jim Vanbrederode, a candidate for New York State Senate and retired chief of police, was also among the upset community members who reached out to the school to voice their dissent.

“Speaking as a retired Police Chief and Alumni of Brockport’s Masters program, I am deeply concerned and offended that this State Institution advances and promotes ‘criminals’ over ‘community," Vanbrederode wrote on Mar. 14. 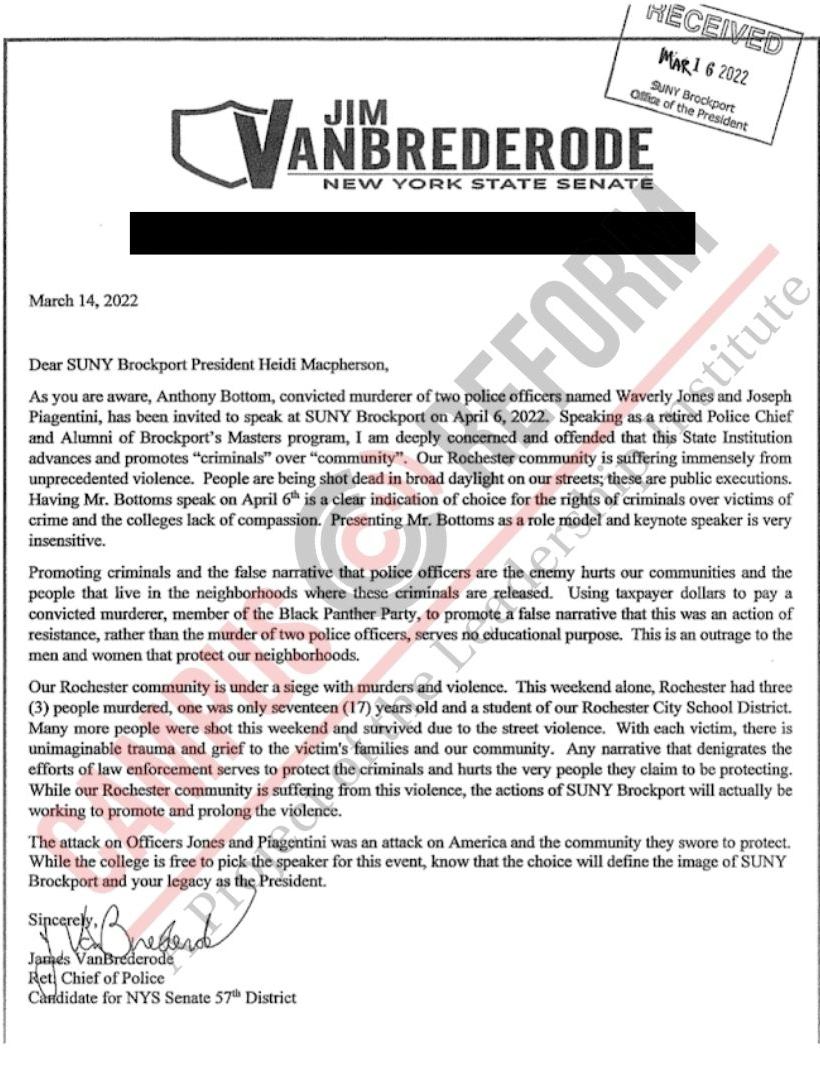 Vanbrederode continued, “Using taxpayer dollars to pay a convicted murderer, member of the Black Panther Party, to promote a false narrative that this was an action of resistance, rather than the murder of two police officers, serves no educational purpose.”

Muntaqim, formerly ‘Anthony Bottom’, was convicted for the murder of two New York police officers after he lured them to his location with a fake 911 call in 1971.

The Apr. 6 campus event at the public New York public university, however, described Muntaqim as a “grandfather, father, mentor to many, and loving human being”, and characterized his crime as being “captured...during a midnight shoot-out.”

Also on Mar. 14, SUNY Brockport President Heidi Macpherson sent a message to the university community regarding the event, stating that “[t]he College has received strong feedback about this visit. Some are outraged that a man who has been convicted of such crimes was invited onto campus. Others look forward to the opportunity to learn about Mr. Muntaqim’s experiences.”

Macpherson went on to state that the event will not be canceled because of the college’s belief in “freedom of speech.”

Emails obtained by Campus Reform from SUNY Brockport show that much of this “strong feedback” came from current and retired police officers.

Retired officer Edward Giblin, for example, wrote a letter to the university on Mar. 10 expressing his “extreme disappointment and frustration” that the school would host Muntaqim.

Giblin also criticized the event for its “sanitized version of history” in failing to acknowledge Muntaqim’s “very active participation in the cowardly and cold-blooded assassination of Patrolman Waverly Jones and Patrolman Joseph Piagentini.” 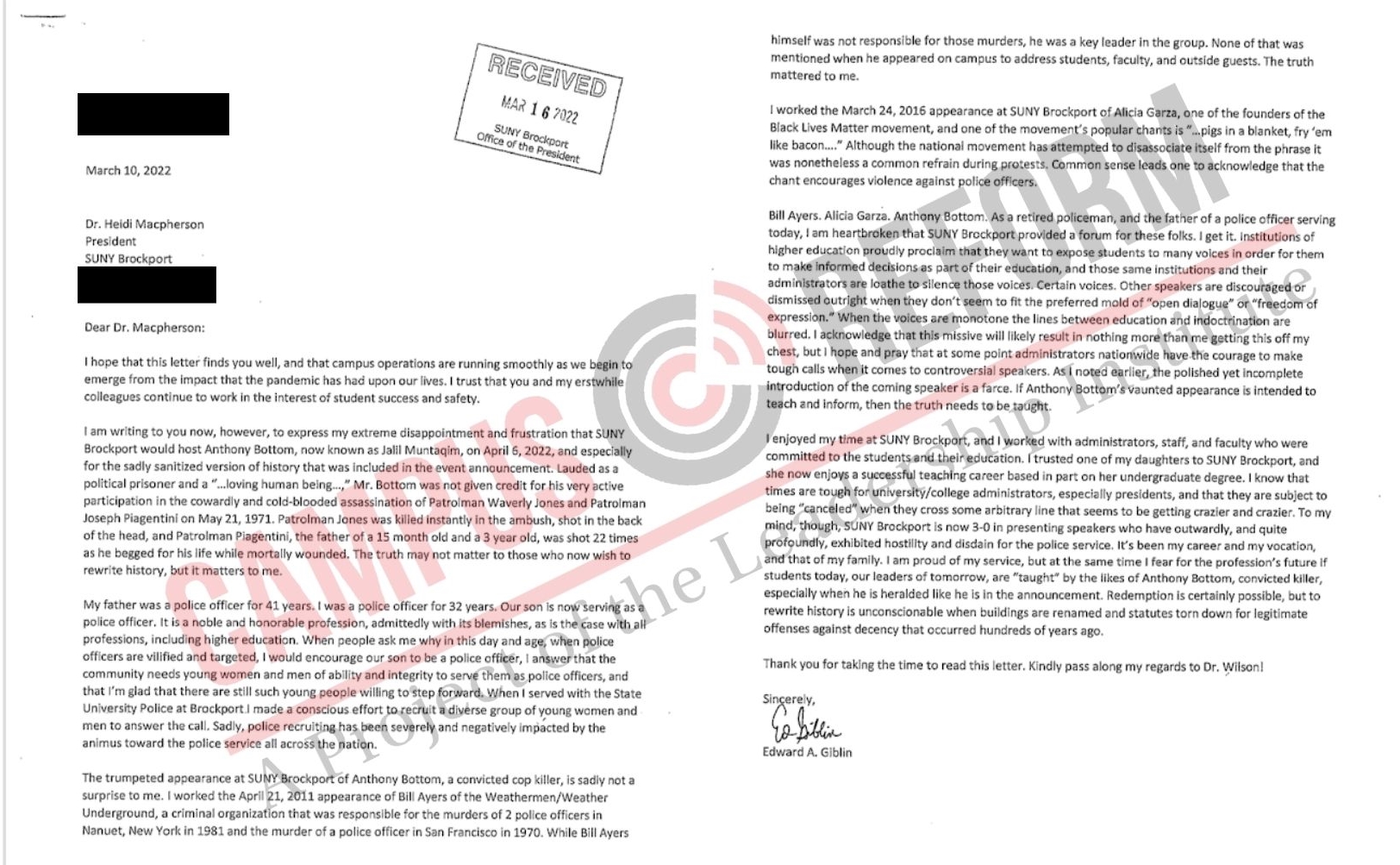 Giblin went on to criticize similar SUNY Brockport events, such as its hosting of Black Lives Matter founder Alicia Garza, as well as Bill Ayers of the radical Marxist Weather Underground organization.

“SUNY Brockport is now 3-0 in presenting speakers who have outwardly, and quite profoundly, exhibited hostility and disdain for the police service”, Giblin concluded.

[RELATED: 'We take nothing off the table,' Cop killer urges SUNY Brockport audience to take 'any means necessary' approach]

Diane Piagentini, the widow of one of the fallen police officers murdered by Muntaqim, also wrote a heartfelt letter to the SUNY Brockport President on March 13.

“Your bio presentation of Jalil Muntaqim (Anthony Bottom) is incorrect. He is a convicted cop killer, of my husband Ptl. Joseph Piagentini and his partner Ptl Waverly Jones”, the email read. “Bottom and his partner Herman Bell walked up behind the two officers and at point blank range shot them both in the back.”

“While my husband lay on the ground pleading with them not to kill him, pleading he had a wife and children, Bottom took his service revolver and emptied it into his body,” Piagentini’s email continued. “Is this the kind of person you want to give a lecture to our future men and women[?]”, Piagentini asked. 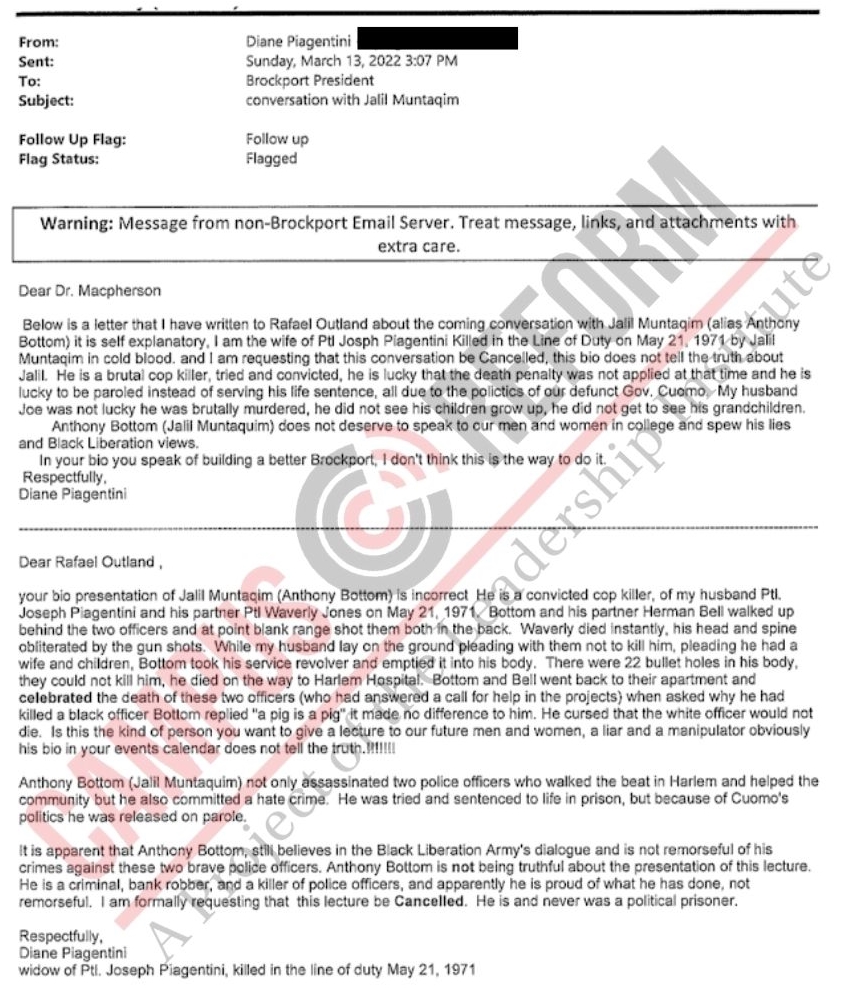 The Monroe County Association of Chiefs of Police sent on Mar. 16 signed by nine officers.

“While we respect and endorse freedom of speech and your college’s efforts to engage in difficult conversations, we cannot fathom the value of this particular dialogue," the officers wrote. 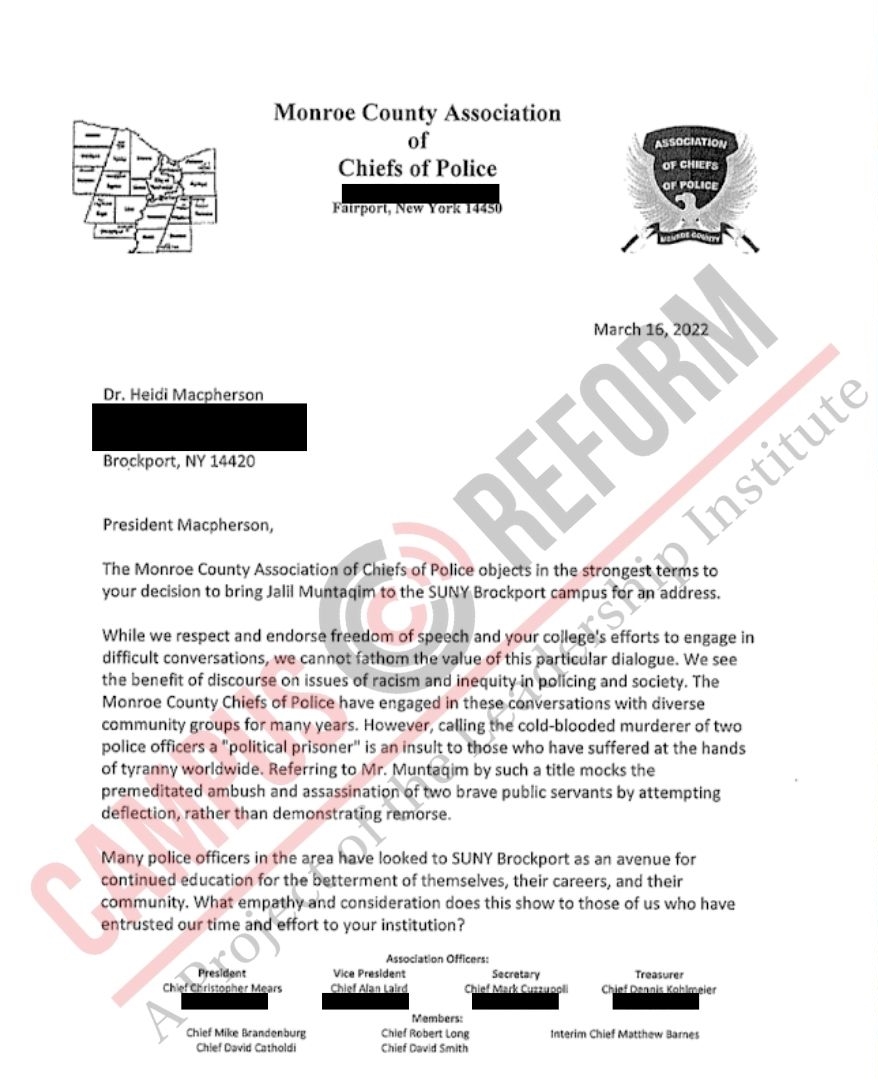 Retired NYC Detective Sergeant George Reich wrote an emotional email to the school on March 18 detailing the night he was notified that his “mentor Police Officer Joseph Piagentini was murdered.”

“Just like I can never forget the day of the week and the exact date that Joe and Waverly were murdered, I’m once again in shock that you would allow a murderer on your campus to speak,” Reich stated. 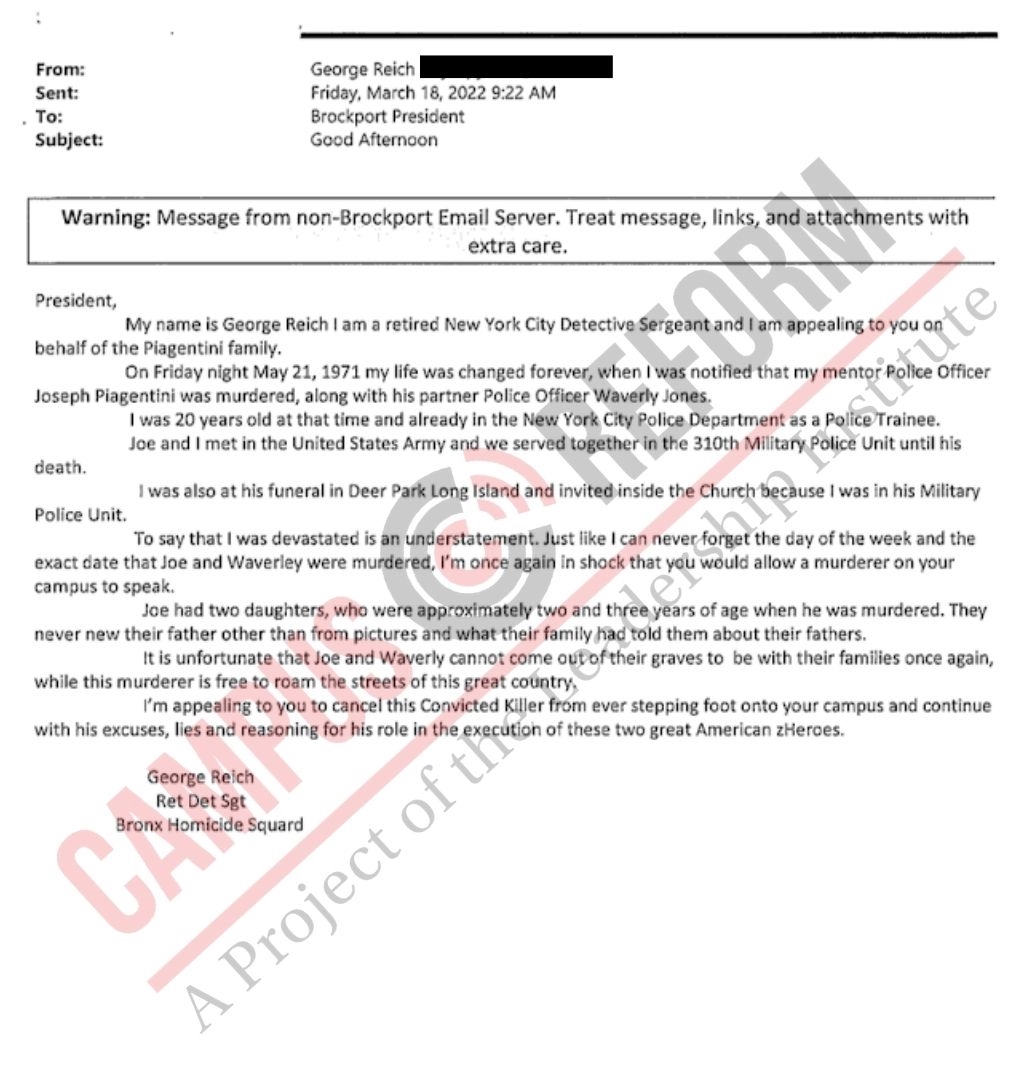 Another retired NYPD Detective, Paul Gilgannon, emailed the school on Mar. 14 to register his issues with inviting Muntaqim.

“The heartbreak that you feel when you lose a loved one is what we retired and active officers of the NYPD also feel when we think of these two family oriented officers being gunned down by a killer you are presenting as a political prisoner,” Gilgannon wrote. “He is no political prisoner. Governor Cuomo granted him early release in return for votes.” 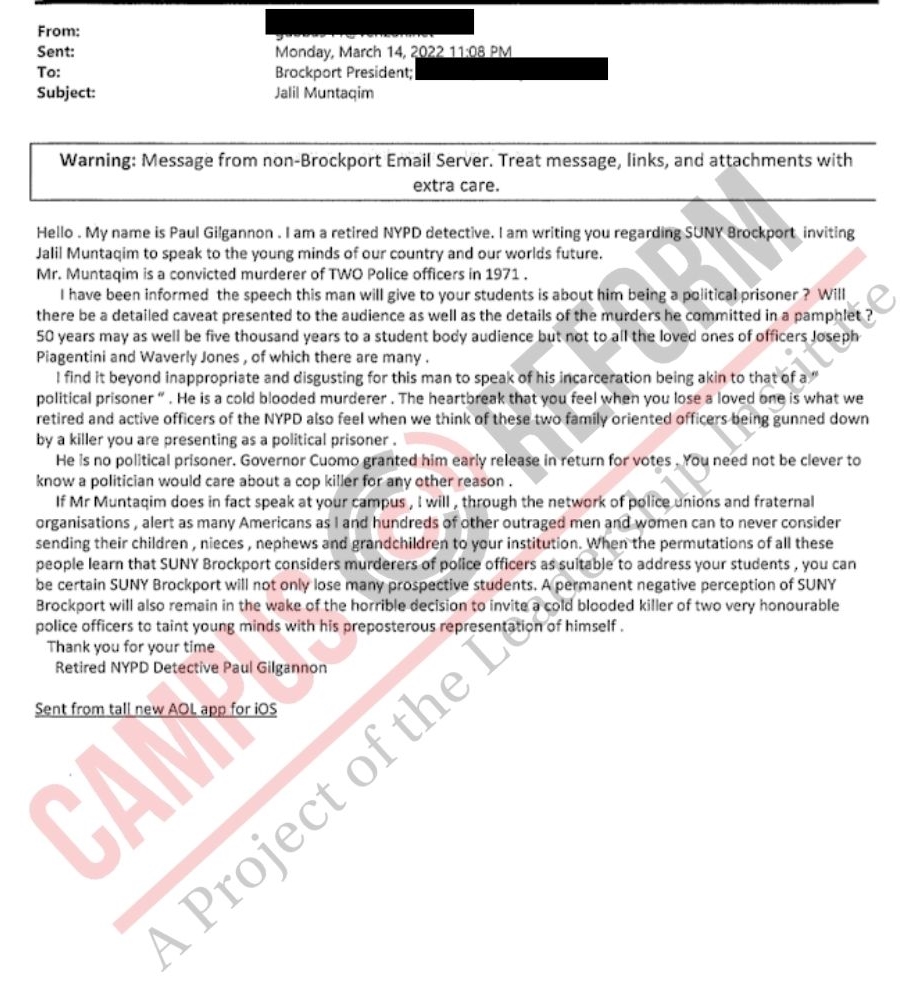 A Mar. 11 email from retired New York officer David Pearson emphasized that SUNY Brockport had countless other options for speakers to bring to campus.

“Out of all the people in this area who are true mentors and true loving human beings, it blows my mind that this killer is who you selected to speak at your college,” Pearson explained.

“I believe that people who have made bad choices in their past deserve forgiveness and a second chance at life," he continued. "But I cannot understand why you would want this man, as opposed to someone who was truly a victim of oppression and political corruption instead of a man who does not own his mistakes.” 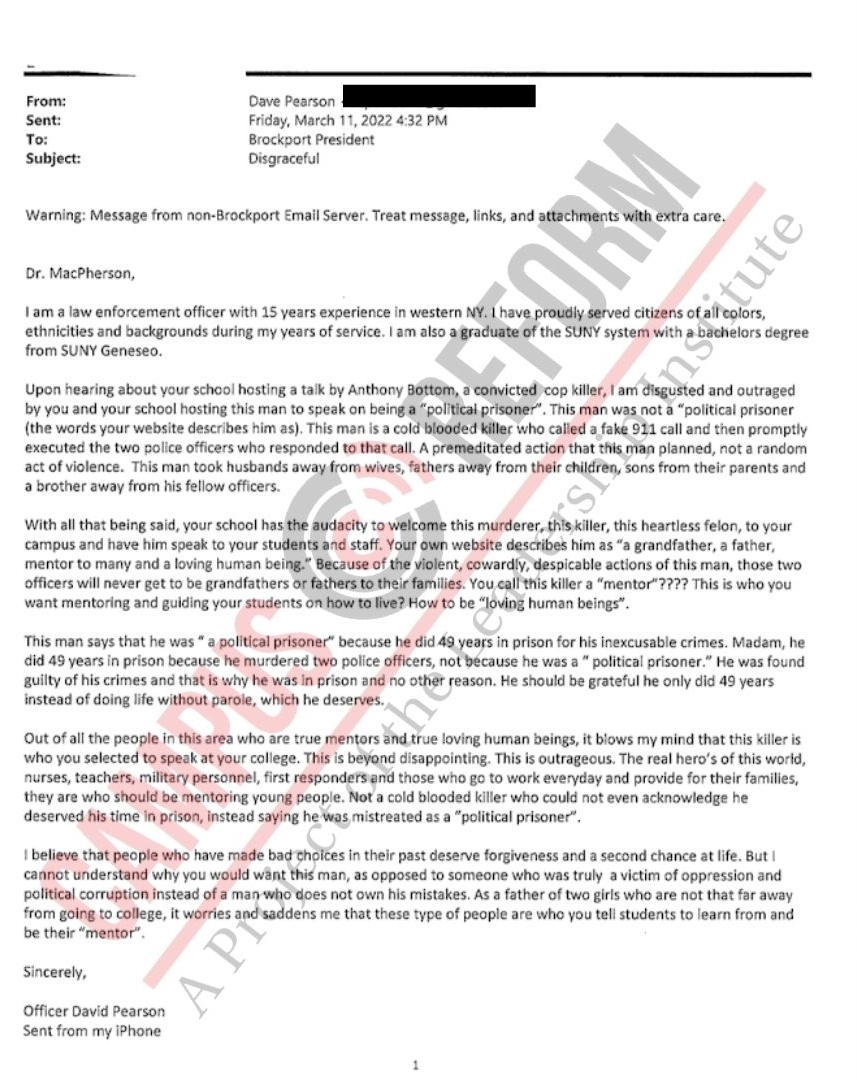 “Our record 81 homicides in the City of Rochester in 2021 and nation wide records should be sending a message that brainwashing our youth with the misguided views on the criminal justice system will only bring this nation to its knees and cause irreparable damage," officer Timothy Luety wrote the university on Mar. 11. 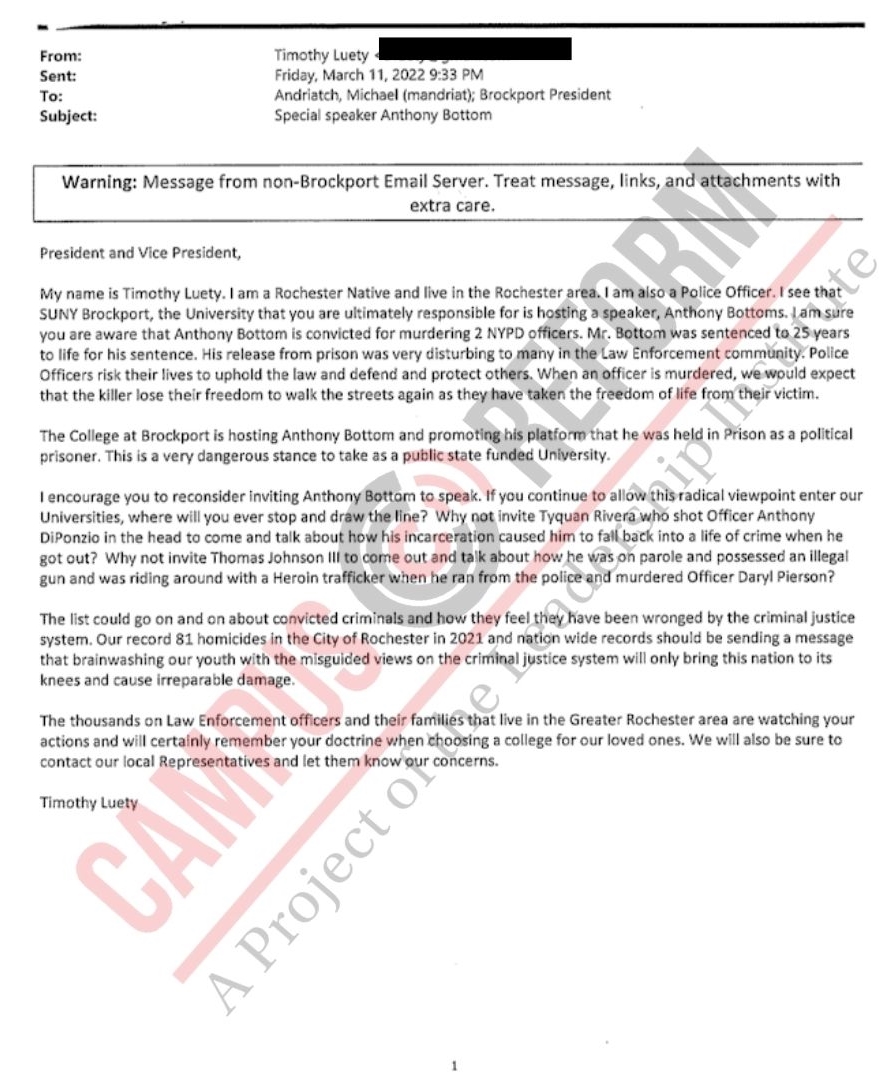 Active police officer Kate Flanagan also shared her views on the event, writing, “As an alumnus of SUNY Brockport and a current law enforcement officer I am disgusted.”

“I feel betrayed by the very institution I chose to attend," she added. 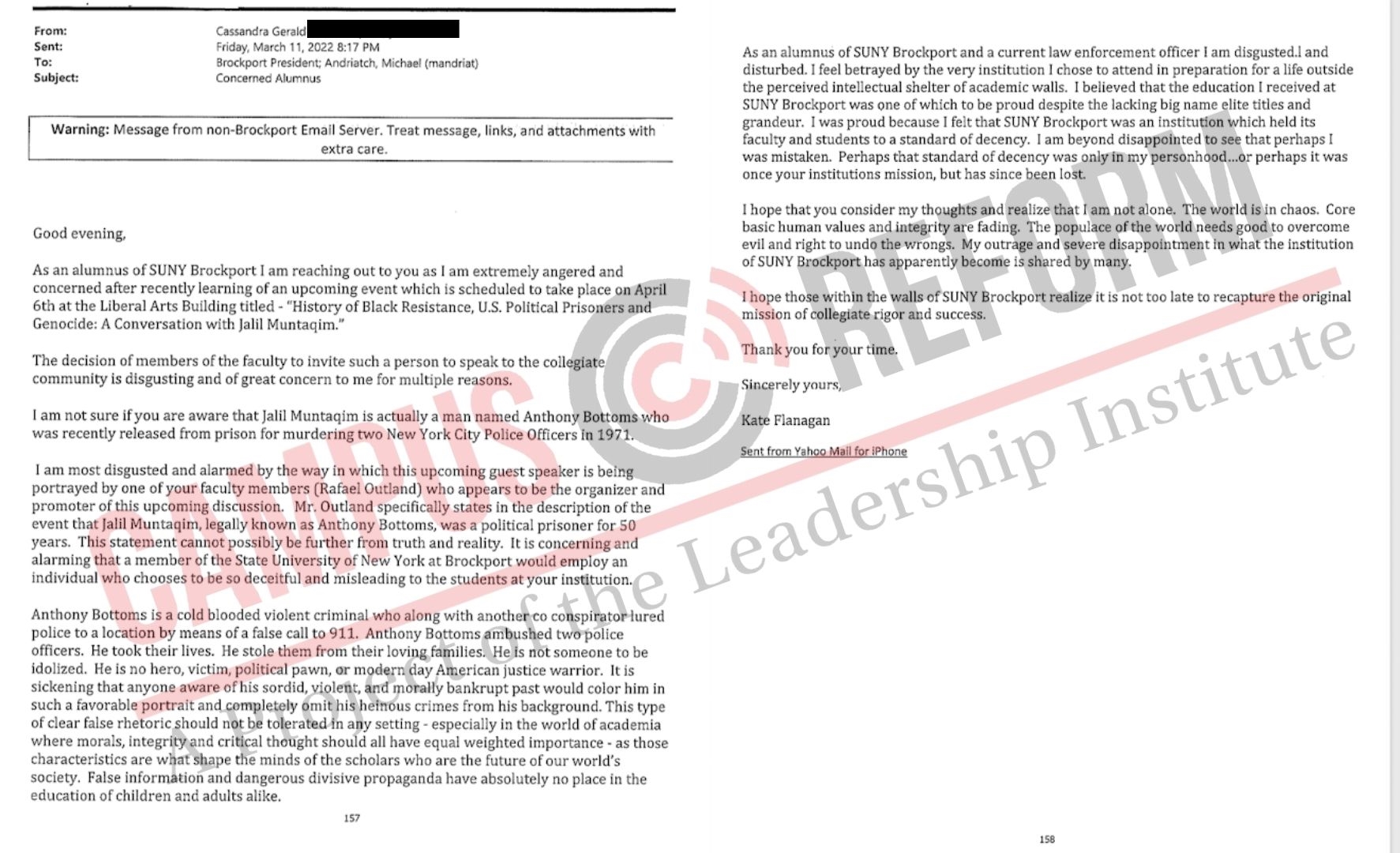 Multiple law enforcement officers and their family members sent emails to President Macpherson stating that this event has led them to lose respect for the school, and that they will no longer be donating or recommending that family members attend SUNY Brockport.

Daniel Celano, a NY police officer and Brockport Alum, stated in a March 11 email that “I am officially done with your university and will never again donate, recommend or associate in any way with the college.” 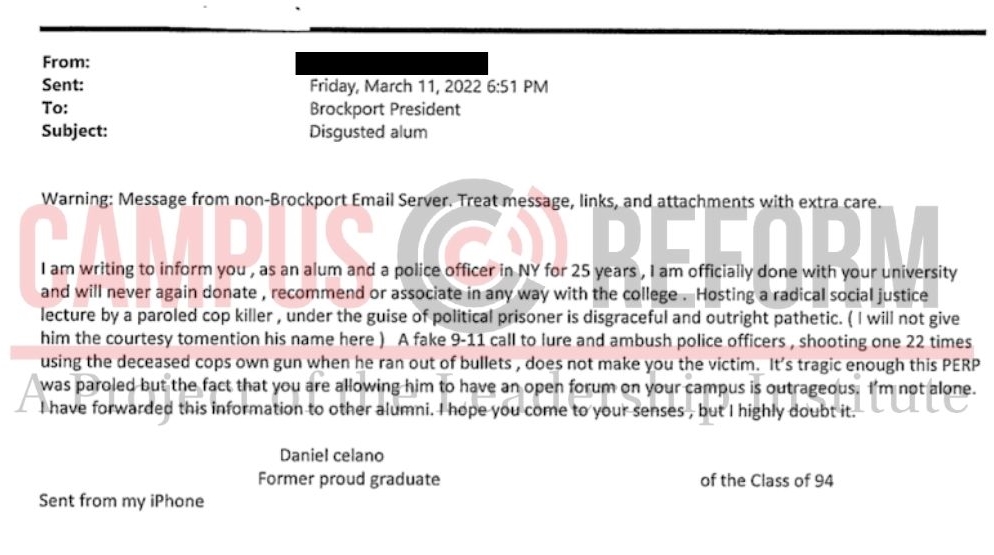 Retired law enforcement officer Matt Meserole stated in a March 16 email to the university that he is “utterly flabbergasted that the president of a state run school funded by state and federal tax dollars, including your salary, would condone such actions.”

“Please feel free to call 911 next time you’re in a jam,” Meserole continued. “[W]e will show up for you, even though you didn’t show up for us here.” 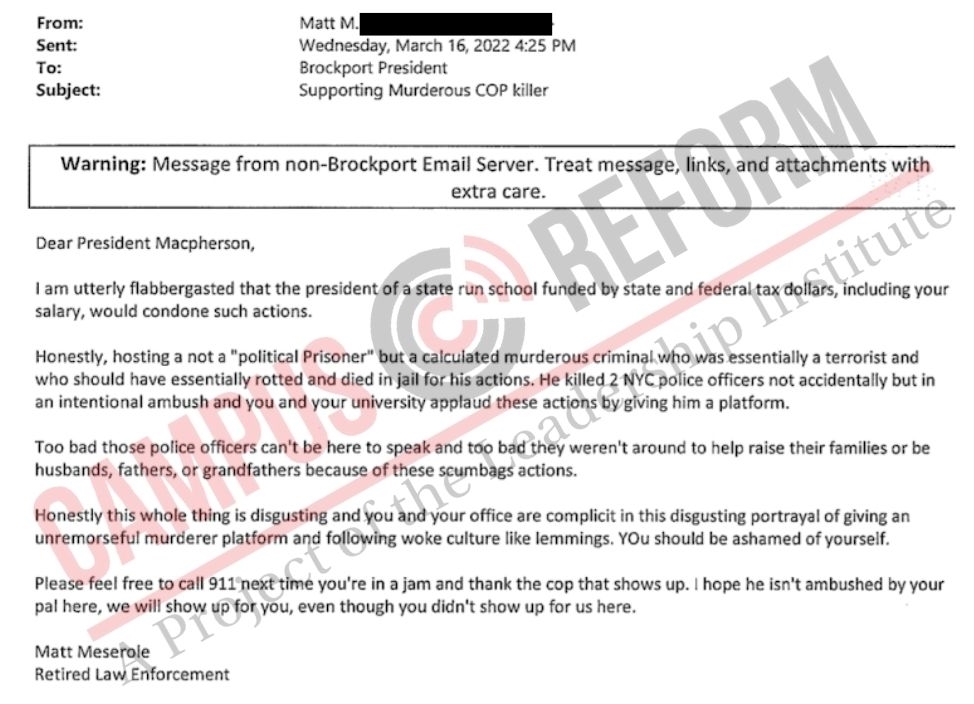 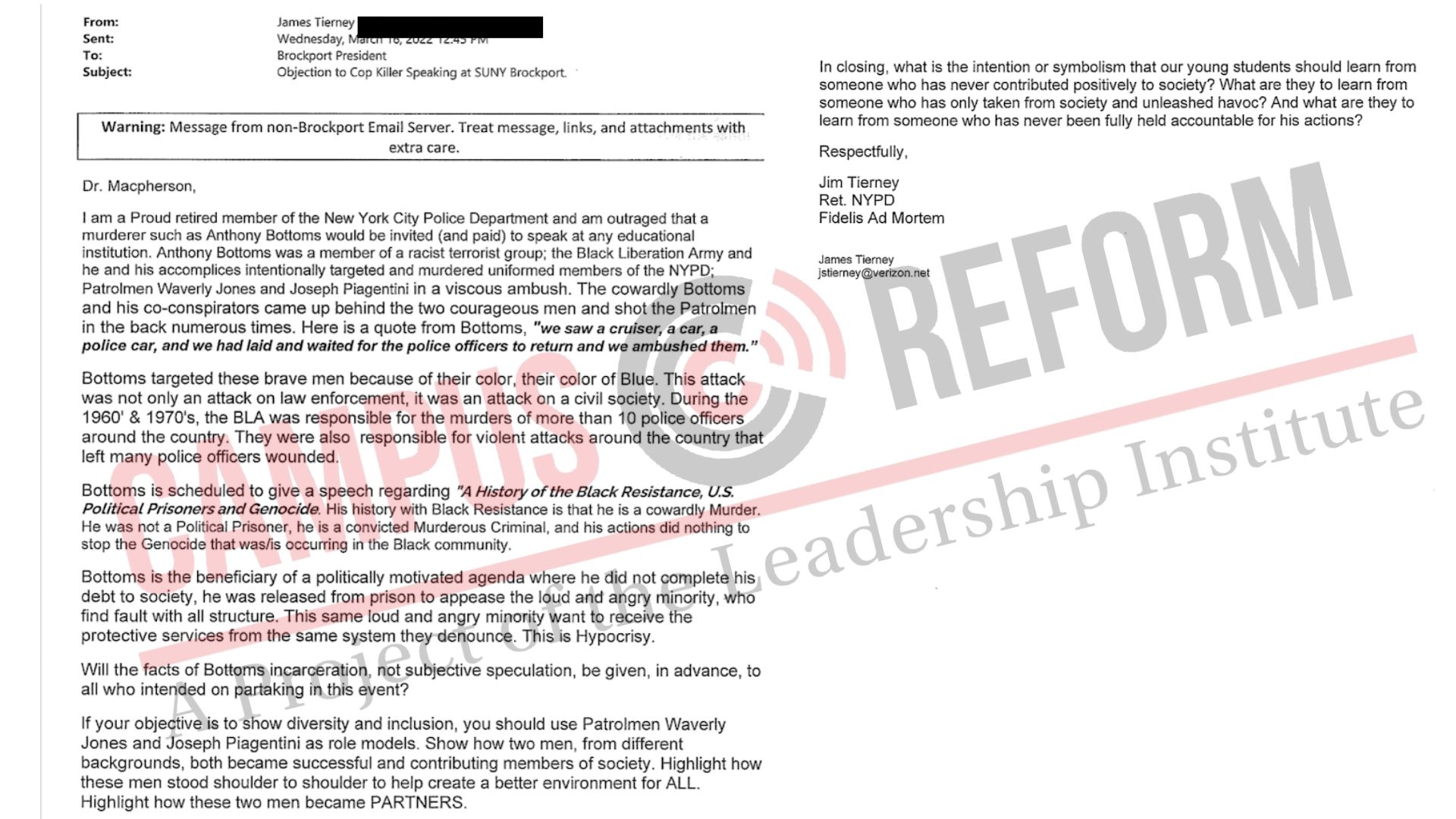 In Tierney’s March 16 email, he stated that “Bottoms is the beneficiary of a politically motivated agenda where he did not complete his debt to society, he was released from prison to appease the loud and angry minority, who find fault with all structure.”

“If your objective is to show diversity and inclusion, you should use Patrolmen Waverly Jones and Joseph Piagentini as role models.” Tierney continued, “Show how two men, from different backgrounds, both became successful and contributing members of society.”

The SUNY Brockport President received over 100 pages of emails from active and retired police officers, their families, and other concerned citizens. These emails were unsuccessful in canceling the April 6 event, with President Macpherson instead deciding to cancel classes that began after 4:50 PM that day.

Campus Reform has reached out to SUNY Brockport and the individuals mentioned in this article, it will be updated accordingly.